I have no idea what 'playbook' means, being British. How am I possibly supposed to grasp a concept so arcane; so steeped in Americana? You might as well ask me to participate in a rodeo or wage a baseless imperialist war against a country wholly unprepared to defend itself against mine. A good thing, then, that the UK marketers of Silver Linings Playbook had the sense to make the word very small in all its promotional material. A less good thing that Ali wrote a whole feature about this before I got around to writing the introduction I'd been planning based on this premise. One day I'll have more than one idea in my head at a time, then I'll be unstoppable.


The thing about this odd marketing quirk is that, aside from the daft presumption that British audiences who bathe daily in US popular culture will be alienated by Americanisms, it leaves you with the title 'Silver Linings'. Which is an awful, awful title for a film – and one that does a disservice to an excellent piece of work. I say this as someone who saw in director David O. Russell's last film, The Fighter, only a leaden, by-numbers sports story, has never seen much appeal in Bradley Cooper, and is as disappointed as everyone else at how uncomplainingly Robert De Niro is easing into old age. Hell, if Chris Tucker hadn't been in it, I probably wouldn't have shown up. 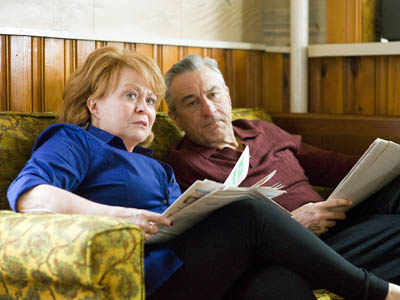 Imagine the months of devotion to the Method it took to read a paper like that.

But the first thing you notice, and what immediately puts you on safe ground, is how funny Silver Linings Playbook is, and how much this is effected by Cooper's performance, as opposed to a script packed full of zingers. Just released from an institution after a breakdown, his Pat Solitano is jittery, seemingly bipolar and largely oblivious to social boundaries. This sort of 'missing moral barometer' idea would be easy enough to play just for laughs – as Zach Galifianakis does alongside him in The Hangover, say – but Cooper has the deftness to be both funny and convincingly crazy. He can switch from strung-out staccato comic delivery to real ranting and raving emotion in no time at all, wrong-footing you but never the story.

Moving back in with his parents (a football-obsessed De Niro and an underused Jacki Weaver), Pat sets about obsessively trying to win back the wife who cheated on him and set off his episode. It's a doomed endeavour, you can see, but he's so engrossed in it that when he meets Tiffany (Jennifer Lawrence), recently widowed and with her own mental health problems, he's unable to react normally to his attraction to her, and the prospect of a traditional love story (suggested a bit too glibly by the trailer) seems remote.

Where there's a danger that the standard getting-to-know-you tropes of romantic comedy are going to rear up, it's dashed: the usual idea of the man overcoming his commitment anxiety is replaced by his genuine disinterest in the woman. It's probably too much to suggest that this mirrors the disjointed thinking of the mentally ill as it's probably intended to, particularly as the film never really addresses those issues head-on, but you could call it 'off-beat', if the term didn't remind you so much of a million Paul Giamatti films with slanty letters on the poster. 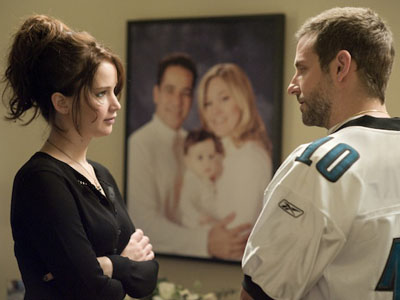 "Sure, we're nuts, but these guys modelled their wedding on Ashley and Cheryl Cole's."

There are some missteps towards the finish line: we career a little too readily towards one of those About a Boy endings where the attempt to win a competition substitutes for resolution, trying to wrap up Pat's girl troubles and daddy issues all in one go. It's a little disappointing, given that you don't necessarily want a story to suggest that all its mentally ill characters' problems can be easily resolved. But this is more a nod towards traditional romantic comedy, and fair enough: not everything has to strive to defy categorisation.

More:  Silver Linings Playbook  Bradley Cooper  Jennifer Lawrence  Robert De Niro
Follow us on Twitter @The_Shiznit for more fun features, film reviews and occasional commentary on what the best type of crisps are.
We are using Patreon to cover our hosting fees. So please consider chucking a few digital pennies our way by clicking on this link. Thanks!