Sin City: A Dame To Kill For

Nine years after the pages turned on Robert Rodriguez's first Sin City movie, and with at least three major parts recast, you can't help but think this Dame To Kill For is sashaying into town long after everyone has lost interest. Showing no signs of added maturity - if anything it's even more juvenile - this slick-yet-soulless sequel features the required quota of girls, guns and garrotting, but it's unlikely to win over those who were unimpressed by the same stiff sideshow almost a decade ago.


It starts with a growl. The rumble of Mickey Rourke's narration fills your ears as his bruiser Marv - whose prosthetic-augmented face is now almost indistinguishable from Rourke's own - is catapulted into shot. Marv is just one of Sin City's growlers: together with Dwight (Josh Brolin standing in for Clive Owen), newcomer Johnny (Joseph Gordon-Levitt) and the ghost of John Hartigan (the ghost of Bruce Willis), the males of this movie are all in competition to provide the most monotone baritone possible - voices so deep and wide they'd rattle the nails loose from Barry White's coffin.

The men of Sin City don't just share phone sex tonsils - they're largely indistinguishable from one another. All are at the mercy of women. All are supernaturally strong. All are capable of taking bullets and beatings and coming back stronger (well, except for Bruce Willis). The film has a criss-cross chronology, comprising of half prequel and half sequel, so you'd be forgiven for losing interest in which dude wants which other dude dead. By the time you've heard your tenth faux-Chandler narration - spoiler: Sin City is a shithole full of shitheels - you'll be enduring the ride, not enjoying it. 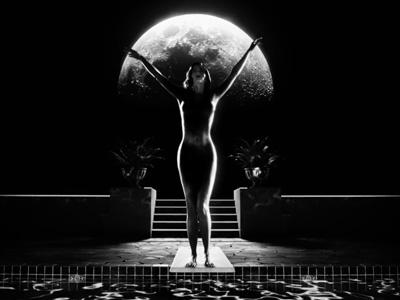 Except for this bit.


The women don't fare much better. Jessica Alba fronts the weakest segment, in which her stripper Nancy seeks revenge for the, er, suicide of John Hartigan - all fine, except Alba doesn't have the necessary grit to sell obsession. The form her grief takes is unconvincingly swigging from a vodka bottle and letting a room full of drunken men ogle her while she performs some miffed pseudo-stripping (one thinks of Mark in TV's Peep Show, suffering the awkward un-eroticism of a gentlemen's club: "Great, now I'm getting an angry lapdance"). It's exploitative, but worse fates await the likes of Juno Temple, Rosario Dawson, Julia Garner et al, who use their bodies for sex and then either get killed or forgotten about.

Much as she did with 300: Rise Of An Empire, however, Eva Green holds up the mid-section with great gusto. Pouting with just the right amount of vamp and camp, Green's titular dame pushes this Sin City firmly into farce where it belongs. As a seductress extraordinaire, Green is having fun, which is more than can be said for the sour-faced fellows in her thrall. Watching her play the victim and thrust her head into the lap of the cop that comforts her is a pleasure only matched by the sight of her waiting by the phone for his call later that night ("About time," she purrs). The fact she is nude while doing this is absolutely integral to the story, you understand; the film dips a whole star every time she's off screen.

Sin City: A Dame To Kill For can't match the sum of its parts: for every electric scene with Eva Green, there's a duffer with Joseph Gordon-Levitt's cocky poker player; the scant screen time spent with smirking brute Marv (who, hilariously, steals the hat off the guy he just almost murdered) is offset by extraneous scenes of a sulky Jessica Alba twerking half-heartedly. Powers Boothe makes for a terrific villain; Josh Brolin is hard to like as a hero. There are plot points that will make no sense if you haven't seen the original, and some that aren't clear even if you have. Individually, A Dame To Kill For has its merits; as a feature film, it just doesn't gel. 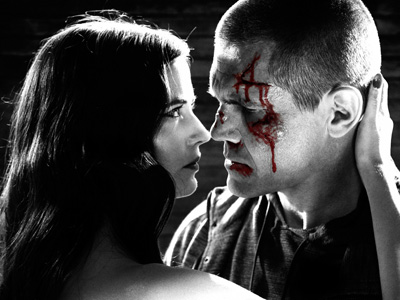 "My heart bleeds for you. By which I my head."


Take some comfort in the fact that A Dame To Kill For is just as strikingly attractive as the first Sin City, the 3D adding another dimension to the distinctly flat panels of Frank Miller's comic - you can practically feel the harsh sting of the constant rainfall. Despite the odd sickly shade of green-scene - actors obviously running on the spot; characters interacting as if shot weeks apart - A Dame To Kill For looks the business. The high contrast monochrome is as sharp as ever, with particular attention paid to the eyes - Eva Green's piercing peepers are just as seductive as her body.

There's no doubt that between them, Rodriguez and Miller know how to pick a killer shot - it's just a shame they can't figure out how to tell a killer story. It's as Brolin's photographer Dwight says when taking pride in some of his sordid peep shots: "The sad thing is, some of the compositions were actually pretty good."

More:  Sin City A Dame To Kill For  Sin City  Robert Rodriguez  Jessica Alba  Eva Green  Josh Brolin  Mickey Rourke  Joseph Gordon-Levitt  Bruce Willis  Rosario Dawson
Follow us on Twitter @The_Shiznit for more fun features, film reviews and occasional commentary on what the best type of crisps are.
We are using Patreon to cover our hosting fees. So please consider chucking a few digital pennies our way by clicking on this link. Thanks!