I can't tell you how long I have been waiting to take my two-year-old son on his first trip to the cinema. Well, actually, I suppose I can. It's been two years. Obviously. But that wait finally came to an end with this movie, one which I thought might be an appropriate introduction to the big screen for him because a) it's about singing cartoon characters, and b) it wasn't written by Seth Rogen. Of course, I was still fully prepared for failure. Expecting a toddler to stay still and quiet in a chair surrounded by strangers for nearly two hours? Surely impossible. And yet, that's exactly what he did, while fixated on the movie. So whatever I say in this review from now on, know that my son – easily closer in age to the target demographic than I – rates it 10 out of 10 choo-choo trains or whatever.


Of course, he doesn't yet have the critical faculties that I have developed through many years of laughing at Vin Diesel. He wouldn't have been bothered by the film's pixel-thin plot, or the even-more-narrowly-drawn characters. I doubt he even picked up on the subtle exploration of the vapidity of reality television that prompts an almost Brechtian response in ruminating on the fickleness of fame and crushing desperation of the less-talented many who mistake empty achievements for happiness. To be honest, he probably just enjoyed the bright colours and the happy-clappy songs, and at least on that we can agree. The colours are bright. 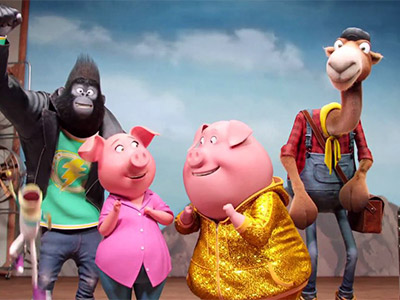 Is it too much to ask for a film about cartoon animals who strive for real ambition and responsibility?


Singing is the life of all of these animal wannabes and that, plus the barely-sketched back stories provided above, is literally all we ever get to know about them as they compete in the X Factor style singing competition put on by Matthew McConaughey's theatre-owning, money-strapped Koala, Buster Moon. They don't even interact with each other in any meaningful way. They just take it in turns to sing a bit and do something funny. Not that that bothered my son, of course. He seemed quite content with the fact that some of them have silly noses and fall over a bit.

The biggest laughs by far belong to Nick Kroll's outlandish, heavily-accented euro-pig Gunter and Buster's very own crony lizard secretary who keeps losing her giant glass eye. With the little bundle of innocence sitting next to me unaware of such things as gross foreign stereotyping and conjunctival bacterial infection, it was easy to take his cue and just try to go along with it, finding humour in the film's slapstick set-ups as much as its exploration of animal anthropomorphism (a concept I have frequently mentioned to my son throughout his bedtime readings, but one he seems happy to leave undefined). 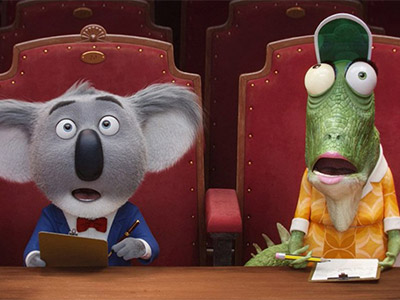 It's funny because she can't see straight, but we should still remember that eye safety is a very important issue.


It’s easy to get swept up in the film when there’s so much positive energy throughout, gaining momentum via a karaoke-quick switch-up of feisty pop songs. After the credits rolled, I remarked to my son that the familiarity of the music must have been a key and carefully planned element in the film’s enjoyment stakes, just as much as the familiar template of the tournament process depicted in the film manipulates a sense of comfort in the viewer. He didn’t seem interested though, partly because, at this point the only song he knows well is The Wheels On The Bus (and even then he gets stuck on a repetitive loop of "all day long") and partly because he was already half-asleep in his buggy, absolutely shattered by the sight of the largest cartoon he had ever seen.

And there it is. As I pondered on the film’s tricky juxtaposition between the brash, vacuous process of taking part in humiliating reality television and the more seemly sophisticated local theatre setting, with writer-director Garth Jennings aiming for both and not quite hitting either, my son was asleep dreaming of dancing farmyard animals. Probably. Either way, you have to wonder whether his enjoyment of the film is any less valid than my opinion.

But then I remind myself that, in years to come, when he is old enough to ask me what was the first film he ever saw at the cinema, I can lie and tell him it was something better and more memorable than this, like Moana or something. So I win.

More:  Sing  Garth Jennings  Matthew McConaughey  Reese Witherspoon  Seth MacFarlane  Scarlett Johansson  John C Reilly  Taron Egerton
Follow us on Twitter @The_Shiznit for more fun features, film reviews and occasional commentary on what the best type of crisps are.
We are using Patreon to cover our hosting fees. So please consider chucking a few digital pennies our way by clicking on this link. Thanks!