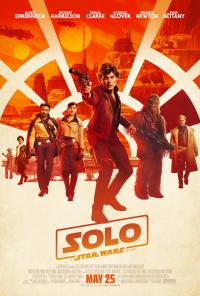 Four films in four years of this newly rebooted output from a galaxy far, far away, and it’s safe to say that Star Wars fatigue might be setting in for some. While, in that time, there’s been plenty of new reasons to love and embrace and cheer on the franchise, does anyone still get the same goosebump thrill from yet another momentous money-shot moment for the Millennium Falcon? Does anyone still audibly chuckle as loudly as they used to at the mention of an obscure character thrown in the script just because? It’s ok to admit it. We’re all still fans. No one's turning to the Dark Side and there’s no hate or anger here. But is anyone else getting the sense that their enthusiasm for Star Wars is being a little... diluted?


This latest Star Wars Story (don’t call it a prequel) doesn’t seem to have garnered the same fervent anticipation that came before the previous three films. Maybe that’s down to the current high turn-over of instalments, or maybe it’s because of those behind-the-scenes stories about performance problems, creative differences and extensive, extensive reshoots. Or maybe it’s because The Last Jedi left many feeling that, for the first time ever, a Star Wars film had been made without them in mind. Who knows which of these single one things could have contributed to audiences having reservations about this movie being any good.

But good it is. Very good, in fact, thriving mostly on the goodwill many will have for it regardless of the outcome, i.e. you love Star Wars and it knows. Once again, a Disney-owned franchise has managed to defy expectations and has pulled a fun, thrilling and charmingly funny movie out of the bag. It’s almost as if they have a proven track record with this kind of thing.

That’s not to say though that the film doesn’t have big problems. Everything you have ever thought about why a character prequel film is a bad idea is present here, because this movie is very much a box-ticking exercise in Things Related To Han Solo. Will we see the Kessel Run? Of course. Will we see Han win the Millennium Falcon from Lando? Yup. Chewie pulling arms out of sockets? A riff on 'Han shooting first'? Even how he got the good blaster at his side? Check, check and even check. 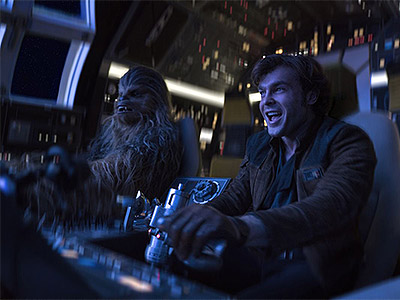 Not to mention the beginning of cinema's greatest furry bromance.


The argument for making a Han Solo film in the first place, of course, is that he has always had hints of an interesting and wide-open back story with plenty of potential. And while the aim here is to explore that, the film is sadly more focused on putting together the specific pieces that make up the complete package we meet in A New Hope. Between this and the fact that references like mynocks, Bossk and even Teräs Käsi are dropped at light speed, it’s hard to argue that this film doesn’t contribute to the most common argument against this kind of 'hindsight' movie: that this film is effectively diminishing the seemingly limitless universe of the original trilogy.

"
"
The film feels like it is built around Han's own resourcefulness, every plot point coming as a consequence of the previous one
If the film gets away with this at all, it’s because it is very carefully written, from plot to scene to dialogue, as a film that feels in keeping with Han Solo’s character. After an opening sequence that eventually sees Han separate from his loved one Qi’ra (Emily Clarke), we jump forward three years to him working as a soldier for the Empire, clearly unsure of his place in the universe, but trying to find the money to go back for her. From here though, he hitches a ride with Woody Harrelson’s Beckett and his smuggler gang, which takes him on a bungled heist, then to meet Paul Bettany’s standout villain Dryden Vos for the repercussions, only to argue himself into another job, which takes him to Lando... and so on. As Han talks himself out of every situation and into another one, the film itself feels like it is built around the same resourcefulness, every plot point coming as a consequence of the previous one, always on the move as Han himself struggles to stay just one step ahead of the dangerous situations he encounters.

Which brings us to the film’s greatest strength, and the reason why most of the flaws here can be comfortably forgiven: this film absolutely nails its characterisation. Alden Ehrenreich perfectly plays the part of the swagger-ific fly-boy, naive but cocky, never doing a direct impression of Harrison Ford’s portrayal but employing enough of his mannerisms in the role - the finger point, the iconic blaster pose - to connect the two performances. Meanwhile, Emilia Clarke plays a perfectly complex love interest, hiding secrets and shades of grey as someone who has been forced to mature beyond Han’s simplistic worldview, and Donald Glover lives up to all expectations as the seductive playboy Lando, as self-assured as he is vain. 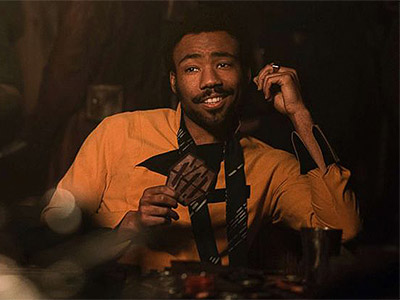 With good reason. This man is absolutely beautiful and he truly belongs among the clouds.


The Phoebe Waller-Bridge-voiced L3 fares less well as the outraged droid fighting for equal rights, aiming for comedy but seeming out of step with the rest of the film. Elsewhere, Paul Bettany makes up for it as a scarily unpredictable and violent gent gangster that lends the story stakes when it often feels lacking in any.

And, really, the bags of love and charm present in these performances, along with the wonderful spirit of adventure that imbues proceedings, are all that matters. There are many other faults that may be picked upon, such as the unnecessarily ugly washed-out colour palate, or one talking point that will prove hugely divisive, with even die hard fans forced to Google the extended universe and canonical chronology, but overall, it has succeeded in getting all the important things right.

In other words, it may not look like much, but it’s got it where it counts, kid.

Additional observations:
- I will never, for the life of me, figure out why LucasFilm didn't delay the release of this movie until December. Releasing it in May meant they stuck to a harsh deadline, given the ousting of Phil Lord and Chris Miller, and also, they denied me a Christmas present of a new Star Wars movie.
- The cameo, from you-know-who... that was a load of old bollocks, wasn't it?
- I would love to see what Michael K Williams' version of Dryden Vos would have been like. As much as I like Paul Bettany, I don't think he has proper screen villainy, more 'take two glasses of free wine at the art show' sort of villainy. You know?
More:  Solo A Star Wars Story  Star Wars  Ron Howard  Alden Ehrenreich  Woody Harrelson  Emilia Clarke  Donald Glover
Follow us on Twitter @The_Shiznit for more fun features, film reviews and occasional commentary on what the best type of crisps are.
We are using Patreon to cover our hosting fees. So please consider chucking a few digital pennies our way by clicking on this link. Thanks!