Something From Nothing: The Art Of Rap

There's only one man brave enough to go up against the Batman on The Dark Knight Rises' release week, and that's Ice-T. You might know him as the author of the touching, heartfelt ballads 'KKK Bitch' and 'Ice Muthafucking T', but now he's made a documentary all about rap, and it's not half bad. Finally, a review in which we have a legitimate reason to use the expression 'the shiznit'.


Despite me being comparably street-credible to a white Carlton Banks, I've always loved hip-hop. You're attracted to it as a teenager because it has a lot of swearing in it and it seems rebellious. You probably grow out of it, but if you don't, and you continue to listen to it way past the stage when you're old enough and white enough to know better, it's probably because you're attracted to the craft of it. That's what I like: the intricacy; the way the best rappers can cram 20 words into a space where only five should fit, and make bits of a sentence rhyme with another bit of it in a way you'd never considered. It's poetry, to all intents and purposes, but in terms of providing a commentary on, and a voice for, urban communities the world would otherwise rarely hear about, it has social relevance way beyond some guy walking on a hill talking about flowers.

It's this aspect that Ice-T chooses to focus on with Something From Nothing: The Art Of Rap, his debut feature film. There's nothing at all here about the facets of hip-hop culture that get media attention – cars, guns, the slinging of crack rock, bitches or hoes – there's just a comprehensive cast of some of the best rappers of all time discussing and demonstrating their craft. 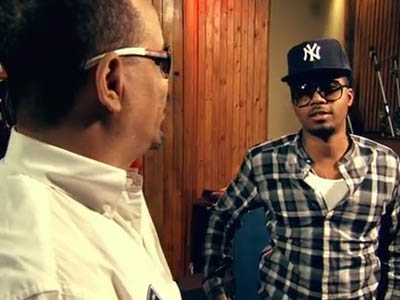 Interestingly, Ice and Nas spent much of the interview discussing their shared affection for the Twilight franchise. Nas is Team Jacob.

Much of your enjoyment of this will hinge on whether you actually like rap, of course. If you don't, you're looking at an hour and change of a bunch of guys talking unintelligibly while you sit there thinking "Pfft! It's just bloody talking. I could do that." You might appreciate the sight of a few people you've probably seen interviewed before acting very differently than usual, though: Kanye West is uncharacteristically humble, almost self-deprecating; and Eminem, usually a mumbling nightmare for chat-show hosts, you've never seen so animated before, clearly relishing the chance to talk about his passion for once, and not whether or not he really wants to murder his ex-wife.

As a documentary it's pretty much nuts and bolts, shot simply, with Ice-T in the foreground as the interviewer. Though he's never been an exceptional rapper, his influence means that if anyone else was making this film, they'd have to interview him, so he's got a right to be front and centre, though there's a bit too much of him walking the streets looking hood in between encounters. There's no real narrative thrust to it; this isn't a storytelling documentary, other than there being a general chronology to the interviews (ie the old guys come first), but where it really comes alive is when everyone gets a chance to freestyle rap straight to the camera. In most cases they're reciting from existing songs rather than making it up on the spot, but you're still seeing their delivery, with all its intricacy and intelligence, in its purest form, which is what we're all here for.


Ice's conclusion, such as it is, is that rap "means something different to every MC", which is a bit flimsy, and reminds you that you haven't been led on a journey so much as just given five minutes of a bunch of people's time. This is more than enough for a wack chump like me: hip-hop fans will lap it up, but everyone else? Well… actually, I'll go out on a limb and say you might get something out of it. Go on, give it a go.

You're still going to see Batman, aren't you? Hey, I tried. Peace out.

More:  The Art Of Rap  Ice-T  Rappers  Rap  Documentary  Ice Cube  Snoop Dogg
Follow us on Twitter @The_Shiznit for more fun features, film reviews and occasional commentary on what the best type of crisps are.
We are using Patreon to cover our hosting fees. So please consider chucking a few digital pennies our way by clicking on this link. Thanks!