As a child of the eighties you notice as you get older that a lot of contemporary mainstream entertainment seems designed to take you back there. Now there's a distinctive crossover demographic: those of us in our thirties who went nuts for Spielberg and Star Wars at the time, and now have our own children whom we want to show the originals and take to see reboots. For my generation the prospect of Spielberg doing The BFG is an intersection in a Venn diagram where we hold each circle very dear, and there's only so bad it could possibly turn out. But it should've been better.


It wasn't while watching The BFG that the symbiosis between Steven Spielberg and Roald Dahl occurred to me, but about a week later while watching the Netflix series Stranger Things. A typically nostalgic Spielbergian throwback of the type common since JJ Abrams went all-out with it on Super 8, its key feature is a confidence in the ingenuity of children and their capacity to get things done.

We can say with some certainty, though, that Dahl would've blocked any entreaties from Spielberg were he alive on account of the director's having a beard, which he loathed.

"
"
The whole business is disgusting. I have always felt that unless a man has a sound medical reason for doing so, then the cultivation of a beard is nothing more than a studied and reprehensible act of vanity. A man is not meant to look beautiful. He should not even be thinking about his face. He should accept it as it is and should peer into the mirror only once a day, when shaving.
Still, both men always advocated tirelessly on children's behalf in their work, and you felt as a child that they were on your side. Dahl was hugely popular when visiting schools to do promotional talks not least because of a mischievous habit of announcing merrily that adults are all cretins. Children loved it; it blew apart the great myth that adults always know what they're talking about. Dahl knew and wasn't afraid to point out what we all know now that we've aged: none of us knows what we're doing. We've just been trying to figure it out longer than children have. His stories would often show a child scorned by adults for outlandish or ambitious thinking, and while there was usually a grown-up who'd help out in some practical way, it was always the child who had the big idea and carried it out. 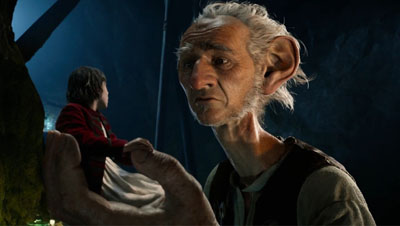 Rylance: his heart's still in the theatre, as long as they'll mocap him and make it look rad.


Spielberg's BFG adheres to Dahl's original pretty closely, except for the introduction of an unseen character who fills in some emotional cracks, but doesn't quite capture its magic. This is odd, because a belief in magic, and that good things come to those willing to entertain it, characterises both men's work.

Odd too because nothing seems out of place. The setting is all convincing fairytale Victoriana – a creaky orphanage bedroom, lanterned London streets – and Mark Rylance's "runt" mocapped into a face full of expression and wonder. Most exhilarating are the scenes where the BFG bounds from London back to Giant Country, his huge feet stepping over cars and leaping telephone lines as John Williams swoops around your ears, then hopscotching island crags as he makes his way home. It nails absolutely the sense of Sophie abandoned by the adult world, and her childlike certitude – unquestioned by the book; definitely the right course of action – that in order to sort all this out they'll have to go and see the Queen.

This idea was always typically Dahlian, both in its Britishness and its taking a child's simplistic view that there could be no one more powerful or able to help, and declaring it the most scrumdiddlyumptious plan, rather than complicating it with boring hurdles like governments or the complexities of calling the military into action at a moment's notice. The Queen is one of Dahl's "good grown-ups", willing to believe a story told by a child and demonstrating a sense of fun through enjoying a whizzpopper after her frobscottle. 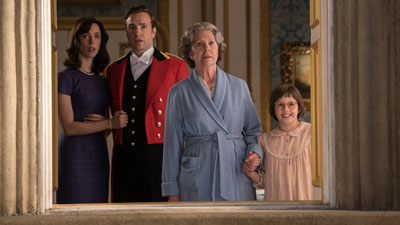 "A monarchy is 'an anachronimble and unjustifiabubble in a modern free society', Mr BFG? I'm afraid I don't follow."


Penelope Wilton understands all this and plays her just so, even amid Rafe Spall's awful Scottish accent and through a strangely misjudged scene where she phones "Boris", whom the British audience, having not yet been given an indication this is not the present day, assumes means Johnson, until she follows it up by calling "Ron and Nancy", so who knows whether it's 1982 or Tuesday. Was she calling Boris Yeltsin, whose time in office didn't even coincide with Ronald Reagan's? Did Spielberg think Boris Johnson would still be Mayor of London by the time of the film's release, and not a national hate figure?

Arguably there's no need to focus on this too hard. But this scene proves a big old headscratcher just as you're starting to sit up again after enduring The BFG's big problem: it sags terribly in the middle. At two hours it'd need a judicious edit to hold a child's interest throughout, but far too much time is spent dicking around in Giant Country, convincing Sophie that she's in no danger, watching the other giants rollerskate on cars, explaining the dream-blowing process, and hatching the final plan. It's a rare Spielberg film that collapses in the edit bay, but The BFG creaks under the weight of its second act so much, you take a long while to appreciate the third, even though it has a lot to enjoy.

Children, if they can be kept from losing interest through the wasteland midway, will love it, I'm sure. Being slap-bang in the middle of its adult demographic, I had higher hopes. The combination of Dahl and Spielberg should've been one that spelled instant classic, but then two rights don't equal a left.

More:  The BFG  Steven Spielberg  Mark Rylance  Ruby Barnhill  Penelope Wilton  Jemaine Clement  Rebecca Hall  Rafe Spall  Bill Hader
Follow us on Twitter @The_Shiznit for more fun features, film reviews and occasional commentary on what the best type of crisps are.
We are using Patreon to cover our hosting fees. So please consider chucking a few digital pennies our way by clicking on this link. Thanks!