You probably learn more about how comedy works through watching a bad one than a good one. Not that that's much consolation when you've shelled out thirteen quid. The Boss isn't terrible, as anything with Melissa McCarthy in it would struggle to be, but it falls far enough short to be instructive.


When sitting in a cinema in which not many people are laughing at the screen you get a lot of time to think, and The Boss made me consider what it is about big-screen comedies that makes them work or doesn't. I find that if it secures a few big laughs early on this sets a tone in the theatre: you don't feel like laughing if no one else is (What if everyone thinks I only like it because I'm lowbrow or I don't get it? OH GOD I'd better stay quiet), but once the mood of the room's established you feel happy to go along with it. And the communal experience makes things funnier: I find I laugh out loud far more at live stand-up than I do watching it at home. 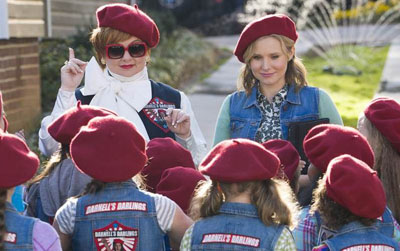 
The Boss doesn't manage to plant the funny flag in the room early, and winning a crowd back once they've settled into a consensus of "Nope, not for me" is pretty much impossible. Which is a shame, because there are lines and setpieces in it which would've killed if the audience had already been put in a laughing mood.

I think this is mainly due to a failure to establish who and what McCarthy's Michelle Darnell is early on. Is she a bad person or just an oblivious one, who can't see why the things she does are so awful it's funny? Is she human or a way over-the-top caricature? Are we on her side or not? It starts promisingly enough, with her doing a motivational course-cum-rally in a packed and enthusiastic sports arena. The dance she does on stage is earnestly daft and pretty funny, but I wondered if the noise of the on-screen crowd gave the real-life one a subconscious excuse not to make any of their own, and in doing so scuppered the whole thing.

Maybe, because you can sense the room's not feeling it already. Straight after that we get a great scene establishing her put-upon assistant Claire (Kristen Bell) and showing us Michelle with her mouth clamped open for teeth whitening; a brilliant sight gag which didn't deserve to fall so flat. A sycophantic assistant, Tito (Cedric Yarbrough), gets some great lines here, then disappears for the rest of the film. Peter Dinklage as Michelle's business rival and ex-lover Renault soon makes a welcome entrance, then does a similar vanishing act for half an hour when we need him most. 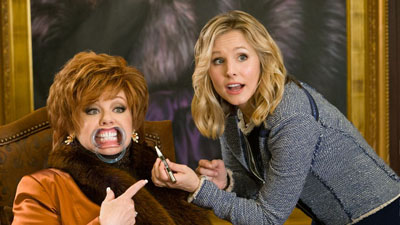 Dinklage: nowhere to be seen, but then he is quite smal- oh, shut up.


Later there are some standard film comedy checkpoints to hit. There's the sudden violent CGI accident, but Michelle's not an accident-prone character and there's no reason for it to happen, other than that it would look funny. Compare and contrast with the airbags in Bad Neighbours, which move the story forward, are consistent with character and are all the funnier for it. Then there's the slow-motion overly-graphic group fight sequence between people you don't expect to be so violent, well choreographed and with some brutal shots but straight out of Anchorman.

McCarthy's at her best as the antagonist, and her scenes butting up against stuck-up Helen (Annie Mumolo) are the highlight here. She can improvise this sort of passive-aggressive – and just aggressive – jibe and counter-jibe in her sleep, but by then the damage is done. This early failure to set up the character must be the culprit: we get a bit of her being too rich to understand how normal life works but there's not enough hay made of it. Every time a joke along these lines is made near the start The Boss pulls back a bit, as if knowing that the further it alienates Michelle from the audience the more work it'll have to do to claw us back when she's to be redeemed. The fact that we see practically no scenes of her time in prison, something you'd expect to be pretty fertile ground for fish-out-of-water laughs, is a prime example.

You can put Melissa McCarthy in pretty much anything and expect to see it elevated as a result. Certainly she does this here: it'd be nothing at all without her. But even with her it's not enough.

More:  The Boss  Ben Falcone  Melissa McCarthy  Kristen Bell  Peter Dinklage  Ella Anderson  Tyler Labine  Kathy Bates  Cecily Strong  Annie Mumolo  Cedric Yarbrough
Follow us on Twitter @The_Shiznit for more fun features, film reviews and occasional commentary on what the best type of crisps are.
We are using Patreon to cover our hosting fees. So please consider chucking a few digital pennies our way by clicking on this link. Thanks!