Every January, Liam Neeson is parachuted into the mid-awards season slump, his brand of no-nonsense, cut-and-dried-in-90-minutes action thrills the perfect antidote to sludgy Oscar bait and the subsequent melange of self-consuming hot takes. His enemies are not the vaguely Eastern European drug dealers and criminals he fights on screen; his real opponents are Frances McDormand, Timothée Chalamet, Greta Gerwig. We cannot overlook the importance of having trashy movies exist alongside important movies: films like The Commuter are crucial to balance out the cinematic chi. Though Neeson's latest run-and-gunner will come and go in a single weekend, leaving nary a trace until he releases the exact same movie next January, it is an essential addition to your awards season watchlist. The Commuter should not be Taken 4: Granted.


The Irishman has a history of causing chaos on public transport - Neeson-related incidents are now the second highest cause of delays after leaves on the line. The Commuter could have easily been a direct sequel to director Jaume Collet-Serra's 2014 thriller Non-Stop, and that would have at least excused the use of the exact same plot template: a former cop trapped on a high-speed method of transport forced to dance to the tune of a criminal mastermind and root out an anonymous suspect from the passenger manifest. In The Commuter, we find and replace 'plane' for 'train' and we're away: a murder mystery on rails that has a good line in thrills and spills but one that’s unforgivably unoriginal and not liable to provide you with any surprises. It's Murder On The Obvious Express. 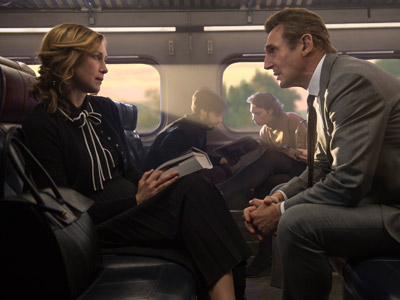 "It's just you putting your bag on the seat means no one else can sit there."


The set-up is slick and the train's geography is well-established thanks to some fancy tracking shots that show us the full layout of the train and its passengers. Collet-Serra wastes no time getting Neeson into trouble, via a wonderfully smarmy turn by Vera Farmiga, and the plotting is tight, uncomplicated and instantly exciting. Unfortunately, what starts off Hitchcock soon devolves into plain old cock in the last act, when the train - and the plot - completely derails. Much like a real commute, what appear to be an innocuous bunch of characters - including Brits Andy Nyman and Shazad Latif aka Clem Fandango - all turn out to be quite irritating company over the course of an hour and a half. Needless to say, a UK version of The Commuter would feature a lot more characters wearing earbuds and 1000% more judgemental tutting.

No one is under any grand illusion that high art is the benchmark here; in fact, unusually for this calibre of thriller, everyone seems to be in on the joke. There's a Spartacus riff that plays completely ridiculously, not to mention a number of moments that bend, if not break, the fourth wall, including a train conductor who absolutely isn't tolerating any action movie heroism shit on his shift. But, for every moment that The Commuter displays an iota of self-awareness, there's another scene where cliché is clung to like driftwood. Cheesy one-liners, convenient plot holes, logic farts, red herrings, hugely irrational decisions that no human being would ever make - you know the Liam Neeson thriller drill by now. 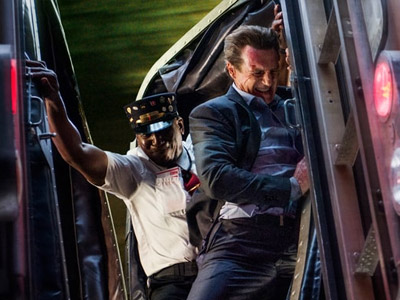 
The biggest laugh of the movie comes at the very end, where an exhausted, near-dead Neeson, having just survived an ordeal that would give mere mortals a lifetime of PTSD, is reunited with his kidnapped wife and child... who greet him with the kind of excitement usually reserved for a family member who has recently returned from the corner shop with milk. I can't remember a scene where the tone of the script was so radically misread. What's a commuter got to do to get some respect around here?

Let’s be honest, this kind of film really doesn’t have much of a future on the big screen: there's precious little of The Commuter that's cinematic and contains nothing that'd look out of place on Netflix. At 65, Liam Neeson has maybe five action movies left in him, and only has about three methods of public transportation he's yet to try, so my advice to you is to set your expectations low and be thankful that you still have the choice between, say, challenging awards season fare about freedom of the press, and a movie where Liam Neeson beats a man to death with a guitar. Allow yourself to be Taken 4: A Ride.

More:  The Commuter  Jaume Collet-Serra  Liam Neeson  Vera Farmiga  Patrick Wilson  Trains
Follow us on Twitter @The_Shiznit for more fun features, film reviews and occasional commentary on what the best type of crisps are.
We are using Patreon to cover our hosting fees. So please consider chucking a few digital pennies our way by clicking on this link. Thanks!