Put down the plastic lightsabers and sweep the Kylo Ren and Captain Phasma toy figures from your desks. Unfortunately, we can no longer simply indulge in the delightfully familiar screech of a new TIE Fighter, or marvel at the warm, welcoming visual hug of grizzled wookiee hair. No, now we have to consider character arcs and nuanced acting and fucking lighting, because there's no escaping it: awards season is all we have for the next couple of months. So let’s try to move on from Star Wars if we can. I know it is still all anyone is talking about and it looks set to be the highest grossing movie of all time, etc, etc but let's try to refrain from thinking about it at all for now and instead talk about Eddie Redmayne’s er… new hope for Oscar success.


The Danish Girl is his saga, after all, faultlessly elevating every scene with his incredible, transformative portrayal of Einar Wegener, an artist seduced by his own feminine side who then undergoes the very first sex-change operation to become more woman than man. From the moment this course awakens in Einar, while he experiments with wearing women’s clothing, through to him taking his first step in a larger world as his female alter-ego Lili, Redmayne doesn’t just simply play an effeminate male. Instead, he seems to follow Einar’s own epic journey as the character goes from a man who has a bad feeling about his role in life, to an apprentice training in the ways of feminine mannerisms, until finally the circle is complete and he embraces the joys he has been looking for. 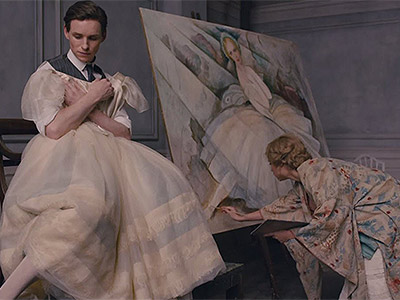 
Redmayne isn’t the single most impressive actor here though – there is another. In playing Einar’s wife, Gerda, a fellow artist supportive at first of her husband’s temptations, but later struggling to reconcile her grief as he ceases to be her partner Einar Wegener and becomes Lili, Alicia Vikander proves herself yet again to be a powerful force. It is a shame though that Gerda is ultimately short-changed by the script as Einar is the chosen one for the focus of the story, making his actions often seem selfish at the expense of his wife’s presence.

The lack of clarity around the story’s timeframe causes a great deal of confusion too. The gradual change in Einar, from learner to master of his own identity, feels like it takes years, with the film’s beginning taking place a long time ago in a country far, far away from where things end, but it all plays out on screen as though mere weeks and months go by between scenes. As such you’ll be urging the film to dispense with some of the pleasantries and get the plot back on schedule. 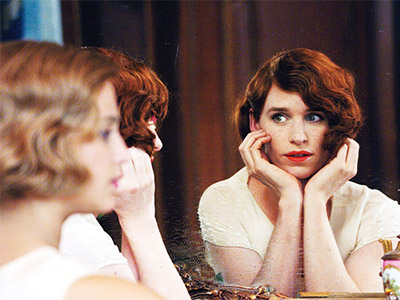 When dress as a woman you try, look as good you will not.


But, of course, there is still a lot of good in the film. You can feel it. And knowing where the story is heading might make for few surprises along the way, but it does lend proceedings a great sense of destiny. In any case, you can always marvel at Eddie Redmayne’s astonishing, honest portrayal of a man reassessing his own gender and daring to venture out in a dress. When he attends an artist’s ball in full Lili attire, you have to think "You came in that thing? You’re braver than I thought."

And, as impossible to see the future might be, you have to imagine that Redmayne will stay on target for another Academy win again this year. Sure, you might think that DiCaprio could get a pity statue instead, but if, after seeing Redmayne’s abilities in this film, you still think he won’t win an Oscar for the role, then I will find your lack of faith disturbing.

Right. That wasn't so hard. (*goes back to cinema to watch Star Wars: The Force Awakens again*)

More:  The Danish Girl  Tom Hooper  Eddie Redmayne  Alicia Vikander
Follow us on Twitter @The_Shiznit for more fun features, film reviews and occasional commentary on what the best type of crisps are.
We are using Patreon to cover our hosting fees. So please consider chucking a few digital pennies our way by clicking on this link. Thanks!