Will they... will they be singing? The 1967 classic animation is so embedded in the public consciousness that it's difficult to know what to expect from this live-action retelling. What will the life-like animals look like when they talk? Will Mowgli look just like cartoon Mowgli? Will Baloo at any point wear coconut shells and a hula skirt? And what of the songs? Those legendary earworms so infectious that it's going to be hard not to resort to punning references throughout this entire review? Thankfully, Jon Favreau delivers a film that is just as wonderful and captivating as that original classic, and he does so by concentrating on the bare n-... the basics. He concentrates on the basics.


It's all in balancing the tone. Favreau gives us a movie that perfectly straddles the lines between kiddie fun, heartwarming Disney loveliness and actual animals-are-quite-scary-aren't-they realism. In the same way that Walt's colourful classics were laced with just enough sinisterness to give kids frights as well as fun and hugs, Favreau shows us real menace in brutal tiger baddie Shere Khan before giving us the warm and fuzzies with Bill Murray's Baloo. In essence, it's a fun-for-all-the-family film, but with retractable claws.

Of course, this law of The Jungle Book only survives on the quality of its characters. And if you are concerned that a film with a high 90% pixel content would result in vacant eyes and weird mo-cap lips, well then forget about your worries and your... er… I mean, just don't worry about it. The population of entirely CGI animals never makes you doubt their tangibility; they don’t just talk, they emote, and they will make you laugh, cry and gasp just like any other compelling real-life performance. More than that though, every wolf, big cat and monkey moves convincingly, interacting with their digital surroundings with such assured palpability, you instantly forget that everything on screen is just a series of 1s and 0s. The result is a lush, rich environment of flora and fauna that you want to get lost in and, with one of the most impressive 3D presentations offered in recent years, it really feels like you could do just that. 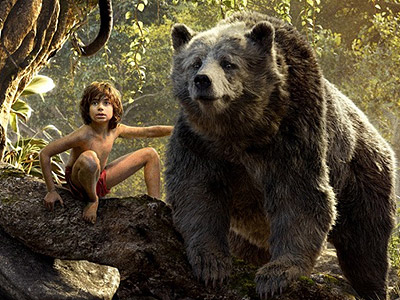 Full effect not quite shown in this small, cropped 2D image.


It helps that the voice cast is brilliantly on point, each member doing exceptional work (all bar perhaps an overplaying Elba as the villain) to breathe new words out of these overly familiar characters. Murray as Baloo in particular is genius casting; both embodying a perfect marriage of amiable tomfoolery and soft-hearted selfishness. While Neel Sethi does an exceptional job of shouldering the whole film as the young Mowgli among a forest of green screen and nothingness, the film only truly kicks up a notch once he meets Baloo and the pair start a budding friendly roar-mance that includes the gently humming – and then teaching – of a certain song.

Christopher Walken’s Louie, on the other hand, is terrifying in his intimidation, playing the monkey king more as a crime kingpin. It all works extremely well in this reinterpretation, although his sudden break-out into I Wanna Be Like You is the only musical moment in the whole film that feels forced, resorting to a shoe-horned rendition of the funky number where, elsewhere, natural outlets have been found for all other homages. It’s ironic that the moment this film fails to live up to its own 'realism' is when the monkeys suddenly start flinging scat around. 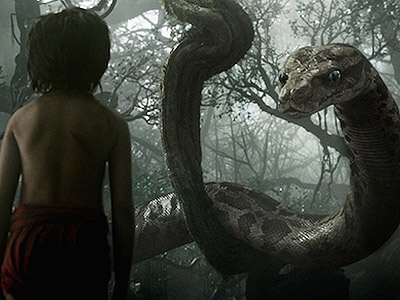 Amazingly, this isn't even the first film in which Scarlett Johansson sheds her skin.


This is really the only major slip-up though. Elsewhere, the film feels expertly composed and beautifully told. There’s even room for creative flourishes from Favreau throughout too, with Kaa’s hypnotic yarn spinning out seamlessly from her spiralling eye to descend into a trippy sequence that stands out as a real high point of the film. And everyone should stick around at the end for the best end credits sequence of the last five years.

Continuing in this new era of a resurging Disnaissance (copyright TheShiznit.co.uk), it probably shouldn’t come as a shock that The Jungle Book is as impressive as it really has no right to be. Both magnificent in its visual storytelling and heartwarming in its emotion, this redux of Kipling’s book might just become the new definitive version. It certainly has everything in place to be the king of the sw-…

More:  The Jungle Book  Disney  Jon Favreau  Neel Sethi  Bill Murray  Ben Kingsley  Christopher Walken  Idris Elba
Follow us on Twitter @The_Shiznit for more fun features, film reviews and occasional commentary on what the best type of crisps are.
We are using Patreon to cover our hosting fees. So please consider chucking a few digital pennies our way by clicking on this link. Thanks!