Historically, the Western is a genre that requires patience. Typically, teenagers are not the most patient of people. Therefore, it stands to reason that Gore Verbinski must have been spectacularly drunk when he pitched The Lone Ranger: a 149-minute Western aimed at kids, smack bang in the middle of blockbuster season. That it flopped to the tune of $190 million is not a surprise; the fact that it is not nearly the disaster US critics heralded it as, however, is something of a welcome revelation.


Verbinski and star Johnny Depp have clearly tried to replicate the format of the Pirates Of The Caribbean franchise; pairing glib supporting man Depp with a fresh-faced handsome lead in an unashamed genre movie, based on a property so unlikely, it couldn't possibly translate into big screen success. What The Lone Ranger lacks that Pirates had in spades is fluidity, a sense of urgency and that unpredictability that a character like Jack Sparrow affords. Instead, Verbinski replaces heroic swashbuckling with ponderous soul-searching, giving The Lone Ranger a more languorous feel. 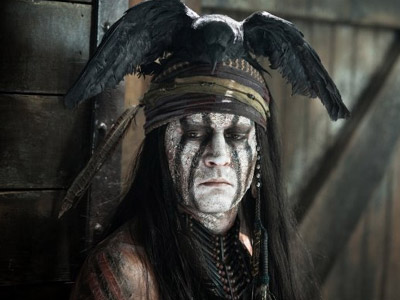 
'Brave' is the word I keep coming back to. That, and 'foolish'. Because once you're sat in front of it, The Lone Ranger does not feel like a blockbuster; more it feels like a very long, very odd, very expensive genre movie. The running time leaves vast acres of arid inactivity between set-pieces - yes, time to get better acquainted with our characters, but also time for the mind to wander. Much of The Lone Ranger is unmemorable, save for the striking visuals. Entire characters could be removed with no effect on the story (I'm looking at you, Helena Bonham Carter). Verbinski is in no rush to tell his tale and entertains no economy; it's one part admirable to two parts foolhardy. 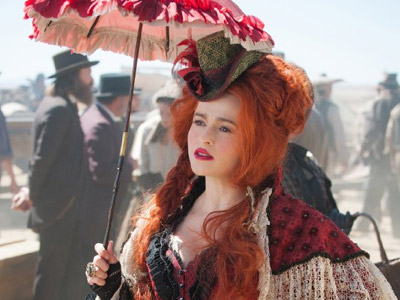 Tim Burton has to be behind this somehow.


Thankfully, it's not a train crash - although it is bookended by two of them. Depp's Tonto dials down the quirk, but Armie Hammer gives the role of John Reid some comedic chops, which is vital because The Lone Ranger is otherwise as a dry as a bone in terms of laughs. Verbinski has a real eye for gorgeous composition and tests his cinematographer with a number of fairly epic vistas. Much of the running time will be spent gazing longingly at the locations and sets and costumes; only in the final action set-piece - the second train sequence - does the tempo finally pick up, thanks to some Buster Keaton-esque choreography but mainly because Hans Zimmer's take on the William Tell Overture is impossible for feet not to tap.

By this time, however, Verbinski will already have burned up most of your goodwill thanks to his fast and loose approach to storytelling. Flashbacks, framing devices, side-quests and meandering narratives do not make for smooth viewing: there is a lean, mean, badass origin story in here somewhere that's an hour shorter and feels far less overblown. As it is, The Lone Ranger is a curio on a gigantic scale; a colossal, misunderstood mistake that will win you over with weird if only you'll let it.

More:  The Lone Ranger  Gore Verbinski  Armie Hammer  Johnny Depp  Helena Bonham Carter
Follow us on Twitter @The_Shiznit for more fun features, film reviews and occasional commentary on what the best type of crisps are.
We are using Patreon to cover our hosting fees. So please consider chucking a few digital pennies our way by clicking on this link. Thanks!