The Meyerowitz Stories (New and Selected)

Time was, you could get a bit of a reaction by saying Adam Sandler was a good actor. You'd be the toast of the cognoscenti, lauded for your brave and rare insight, or at the very least one of those professional contrarians who make film Twitter such a rich and challenging environment. These days the evidence is there and the idea's not controversial: everyone knows he can do it when he can be bothered changing out of his tracksuit. Maybe it's time to think of him a bit differently.


We're a little too used to the idea of the comic actor making the revelatory switch to drama. It's a pleasing narrative. Ah, you think, the pathos was always there in the clowning; the performance elements are the same, but now a serious context makes it touching. Maybe: you look at others who crossed that bridge, like Tom Hanks, Bill Murray and Robin Williams, and see consistencies in their acting on both sides, using the same set of tools, slightly modified.

I think Sandler's a slightly different case. He's essentially just a much better dramatic actor than he is a comic one; it only happens he did the comedies first. Though granted, if he'd started out a serious actor he probably wouldn't have got too far.


Because you watch him here and you don't get that old sigh of relief when it turns out he's good in it; you expect him to be good in it. Malcontent and defeated is his wheelhouse, and Noah Baumbach gives him plenty of that to work with, as his Danny Meyerowitz tries to establish a relationship with a father he always felt distant. His clothing conveys nicely a man unconcerned with being impressive: he wears cargo shorts through most of the film, whatever the weather.

The Meyerowitzes are a bohemian bunch with all the dysfunction that comes with it. Dad Dustin Hoffman is an artist who never got his due; Danny a directionless musician; half-brother Ben Stiller a sort of black sheep because he doesn't work in the arts. Danny, with whom we spend the first chapter, is so convinced he was unfavoured by his father that you presume Stiller's Matthew will be the golden child. But when we meet him, after a good half-hour or so, it turns out his father's focus and pressure did him just as much damage.

Your family screws you up because everyone's imperfect; you just don't realise it until you get older and figure out you're imperfect too. This is a spin on the theme Baumbach was hawking back in While We're Young: getting older and finding that adulthood hasn't worked out how you thought it would, and that the thing you're chasing that you think will make you happy probably won't. Everyone here is disappointed to some degree, except Emma Thompson's Maureen, who is cheerfully drunk in every scene. Maybe she's got the right idea. 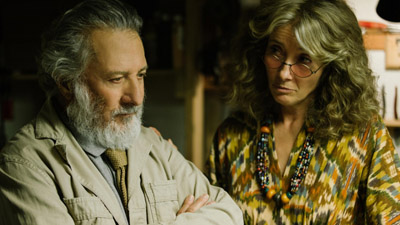 Every actor in Hollywood is contractually obliged to have an Independent Film Beard, which can be grown in two weeks to play a truculent father or unsatisfied son, and then removed in time for Cannes.


Sandler's best and most sympathetic work here is non-verbal, like the limp that dogs him throughout but speaks of a lameness, the slack shoulders, and one scene in which he discovers a woman he's interested in is seeing someone else. In close-up, he hears it and his face drops from eager smile to crestfallen, then corrects itself into unconvincing indifference as the conversation continues, to which you know he's no longer listening. Everything is in that adjustment: the hope, the crash, the defence: you've made yourself vulnerable and you can't let anyone know how much, but now you're staring down the barrel of a whole other future than the one you'd let yourself imagine. That he's capable of delivering all this shouldn't be a surprise to us anymore, and it's wonderful that his director recognises that this face can and should be used as a tool in this way.

Whether there's any point in bemoaning how poor his recent comedies have been is another matter. We can all grab him by the collar and say "Look what you can do when you try!" but he knows it already. There's only so many indie family dramas you can make and disappointed forty-somethings you can play a year. Enjoy the good ones when they come and ignore the rest of it, I say.

More:  The Meyerowitz Stories  Noah Baumbach  Adam Sandler  Grace Van Patten  Dustin Hoffman  Ben Stiller  Elizabeth Marvel  Emma Thompson  Netflix
Follow us on Twitter @The_Shiznit for more fun features, film reviews and occasional commentary on what the best type of crisps are.
We are using Patreon to cover our hosting fees. So please consider chucking a few digital pennies our way by clicking on this link. Thanks!