Last summer I remember reading about George Clooney and Matt Damon playing basketball at a Cambridge council-run gym. They posed for photos, were called 'lovely people' by the manager and basically had a cracking time in south Cambridgeshire. And while in my neck of the woods, they shot scenes for The Monuments Men at the Imperial War Museum, Duxford: a joyful place I was often taken as a child by an over-eager father keen on Spitfires, but less keen on buying me an Airfix model of one.


I feel I have a nostalgic connection to Clooney's talent-sodden, easy-on-the-eye WWII film, kinda like I do with Tower Heist. It pains me to say then that I didn't enjoy The Monuments Men as much as I was hoping to. Oh, and if you're wondering about Tower Heist, I'm somewhere in the crowd during the Thanksgiving parade scene. I think.

The true, lesser-known story behind The Monuments Men is, fair enough, a remarkable one. And Clooney, on writing, producing, directing and starring duties, puts a charming, well-to-do spin on it. Towards the end of the war, art historian Frank Stokes (Clooney) is tasked with pulling together a team of art experts, heading off to war-ravaged Europe and recovering stolen works of art, sculptures and masterpieces looted by the retreating Nazis. After all, victory will have little significance if cultural treasures are lost forever, something Frank regularly points out. 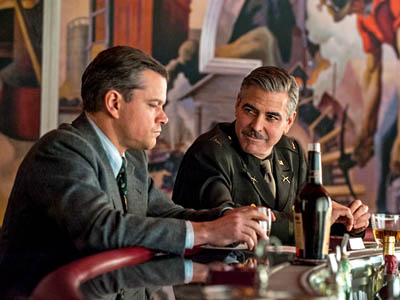 "See, Matt, victory will have little significance if–"
"If cultural treasures are lost forever. Yes, George, you said."


It's a story Clooney clearly feels strongly about, and along with writing partner Grant Hezlov, they try to tell it with all the best intentions. But the problem is it's delivered in the simplest of ways. What could have been a richly emotional telling of one of the war's unique stories instead feels like a Danny Ocean-esque lark through Nazi-occupied Europe.

Sadly, the problems don't end there. Clooney and Hezlov can't quite decide on the tone or the direction they want to take the story. It's got all the makings for a comedy: a soundtrack as jaunty as Jean Dujardin's beret, a mismatched group of out-of-shape art lovers struggling their way through basic training, Matt Damon's torturing of the French language, landmine LOLs, and so on. But then Stokes begins delivering sombre speeches, the smiles disappear and they actually start getting shot at. So when a poignant moment does present itself, like Bill Murray's architect hearing a Christmas message from his family, you feel detached from the moment because you were giggling only ten minutes before. There aren't enough laughs to call The Monuments Men a comedy but it's too cheerful and breezy to consider it a drama. 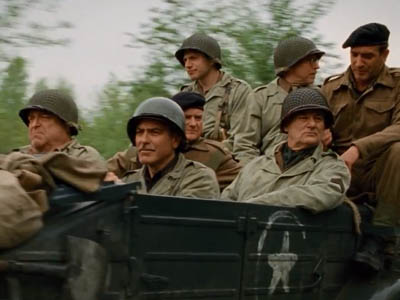 
The hugely impressive cast is Clooney's greatest asset, although no one is really working too hard. Our unlikely band of brothers are split up and sent all over Europe in the name of art, leaving us with a story that's forever leaping around the continent. With the cast paired up, chemistry's already at a minimum, but it's a real struggle to convey it when everyone's talking to one another over (very long-distance and exceedingly clear) radios. We see Murray and Balaban share a cigarette with a German, Bonneville clearing off to a cathedral in Bruges, Goodman and Dujardin seeing a bit of action in Germany and Damon having awkwardly flirty moments with an underused Cate Blanchett in Paris. Meanwhile Clooney...erm, well, he just hangs about making sure everyone's doing their job – just like he does behind the camera. So when everyone is eventually reunited, we feel zero sentiment.

The Monuments Men is a frustratingly patchy film. There are moments of pure excellence but it's too fleeting on all the details and light on the emotion and the heart that could've made it consistently excellent throughout. It might not be the work of art Clooney was hoping for, but it's still worth saving for a dull Sunday afternoon.

More:  The Monuments Men  George Clooney  Matt Damon  Bill Murray  John Goodman  Cate Blanchett  Jean Dujardin  Hugh Bonneville  Bob Balaban
Follow us on Twitter @The_Shiznit for more fun features, film reviews and occasional commentary on what the best type of crisps are.
We are using Patreon to cover our hosting fees. So please consider chucking a few digital pennies our way by clicking on this link. Thanks!