Getting booed at Cannes just isn't the indicator of quality that it should be. The world's finest film critics all in one screening feeling so appalled by the movie in front of them that they are compelled to collectively voice their disdain in the rudest way possible? That film has to be utter balls, right? And yet, as previous Cannes booees The Tree Of Life and Antichrist have proven, all it usually means is that the film offers something markedly different that polarises viewers. As it is with The Paperboy. But did I love it or hate it? See, that's the problem: I don't even know.

Narrated in flashbacks by, of all people, Macy Gray, the film is a Southern slice of oddball storytelling. A trailer trash Nicole Kidman has fallen in love with her prison pen pal, unhinged, convicted murderer Hillary (Cusack) and, with the help of Matthew McConaughey's idealistic journalist, attempts to provide new evidence that will ensure his release. Meanwhile, the journalist's younger brother – an insanely buff Zac Efron – becomes infatuated with Kidman's older woman.

With over-the-top performances from everyone involved, all delivered with an embellished southern drawl, the film immediately comes across as a black comedy. The ridiculous love triangle that forms between the central characters is ripe for humour and, while always played deadly straight, the often extreme situations that transpire are surely only inserted into the script for no other reason than to get an uncomfortable laugh. This includes the first time the group visit Hillary in prison, only for him to start jerking off through his trousers while Kidman slow-mimes oral sex. And, of course, the already infamous 'pissing on Zac Efron's face' scene. 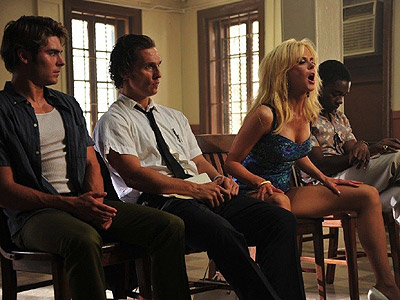 
And yet, the film tries to deliver so much more than just a dark, trashy comedy and it's impossible to tell what exactly director Lee Daniels is trying to achieve here. Even the marketing for the film has undergone a shrewd, post-screening strategy change; something that our friend and Ultraculturalist Charlie Lyne explains well in a recent article. Following the boos at Cannes, the subsequent critic equivalent of bloodlust saw everyone declaring "This film is awful! It's great! You have to see for yourself how brilliantly bad it is!" and immediately the film's PR shifted to play up the "pulpy, sweaty, trashy" aspects rather than the potential award-winning ones.

So if it’s impossible to tell whether this film works in only ways that were actually intended by Daniels, it seems only fair to judge it purely on the subjective value of how much I personally enjoyed it. Which opens up its own bag of issues. 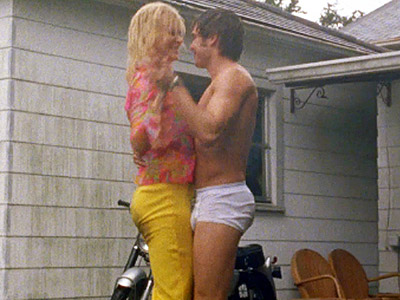 And that's not including how confused this scene makes me feel.


With the plan to prove Hillary's innocence slow to get off the ground, the only immediately compelling element of the film is the performances. Kidman, in particular, is fascinating to watch, disappearing into her role as a sexually charged older bimbo. Meanwhile, Efron gives a surprisingly subtle turn with his adolescent portrayal, being both naive and bullish in equal measure. Cusack is the most questionable in this film, giving yet another dubious character performance, overplaying everything but still managing to be captivating thanks to the level of disturbance that his Hillary offers.

And yet, no amount of great – or, at least, fascinating – acting can save this film from being a complete mess tonally. Starting as a mix between a dark farce and an intense coming-of-age story for Efron’s character, the film takes a suddenly brutal turn in the second half and ultimately becomes a tense, serial killer chiller. The shift isn’t sudden by any means – indeed, Daniels’ guidance through this transition is so understated that the genre seems to shift without you even noticing. But all that does is leave you with an overwhelming confusion as to how the film ended up in a completely different place to how it started.

And, ultimately, that’s the overriding feeling you’ll be left with as the credits roll: confusion. Between Daniels’ frequent feverish touches of fantasy in his direction and the bewildering journey that the film takes you on, the film provides quite a stimulating experience, if not exactly an enjoyable one. Perhaps on repeat viewings The Paperboy will eventually earn a place in the vault of cult films, and it certainly seems like it deserves to be held up as an example. But, of what, God only knows.

More:  The Paperboy  Lee Daniels  Zac Efron  Nicole Kidman  Matthew McConaughey
Follow us on Twitter @The_Shiznit for more fun features, film reviews and occasional commentary on what the best type of crisps are.
We are using Patreon to cover our hosting fees. So please consider chucking a few digital pennies our way by clicking on this link. Thanks!