The Tree Of Life

So here's me, reviewing The Tree Of Life. Me, who sort of liked Transformers: Dark Of The Moon. Me, who has probably never seen an arthouse film without sneaking a snooze and has an extremely low tolerance for pretentious bullshit. Me, who has already put off writing this review for a week and procrastinated to the tune of 50 made-up Terrence Malick trivia tidbits. This should be fun.


No need to worry – turns out those top nobs in Cannes know their stuff. Yes, The Tree Of Life does contain moments of high wankosity, but for the most part it's a satisfying, stylish, insanely ambitious portrait of human nature, anchored by some truly stunning central performances. Think of it as half family drama, half Brian Cox BBC1 science documentary, with some unnecessary bookends of Sean Penn being miserable. At any rate, it's not half as abstract or impenetrable as I feared. 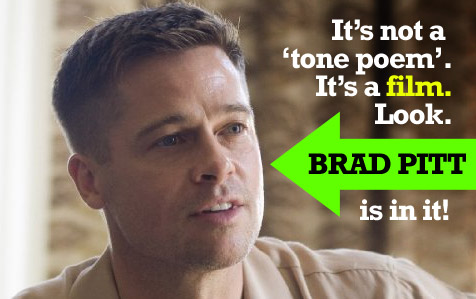 Forget any concept of linear narrative, puny mortal – Terrence Malick cares not for straightforward storytelling. But while it certainly isn't easily pigeonholed, The Tree Of Life is never less than fascinating to watch – on a surface level alone, it's one of the most beautiful movies ever shot. Malick shoots at angles you never knew existed. The Incredible Suit called it "the world's greatest Flickr gallery" and I won't attempt to top that. Okay, I will – it's the world's sexiest screensaver. There.

The bulk of The Tree Of Life – or the 'trunk', if you will (*pleased smile*) – sees Brad Pitt's obstinate father and wife Jessica Chastain raise three boys, one of them Sean Penn's younger self, in 1950s small-town America. Pitt is stubborn and stern, preferring to raise his boys with tough love and hoping they reciprocate. Chastain's earth mother prefers the method of nature over nurture and floats airily through Penn's scattered recollections. Patriarchal repression hangs heavy; Pitt's presence is considerable. 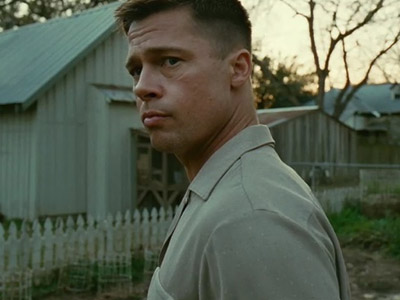 And the award for Best-Supporting Bottom Lip goes to...


Both parents are magnificent, but the young child actors deserve the most credit. Penn Jr is played by a kid named Hunter McCracken – basically a Chuck Norris character waiting to happen – who is mesmerising: you basically see him come of age before your eyes. All three boys are perfectly natural, thanks no doubt to Malick's languid shooting style and the frankly mind-boggling ratio of film shot to film used (150:1 if rumours are to be believed). They're utterly believable and completely human: they're the roots of The Tree Of Life. (Quite pleased with that one too).

It's a shame, then, that Sean Penn's sections don't really flow. In a film with a healthy disregard for common narrative devices, flashback bookends and waking dream sequences feel a little clunky and surplus to requirements. Penn isn't even really required to do much other than stare gloomily out of high-rise buildings and provide visual cues to how deep this shit really is. 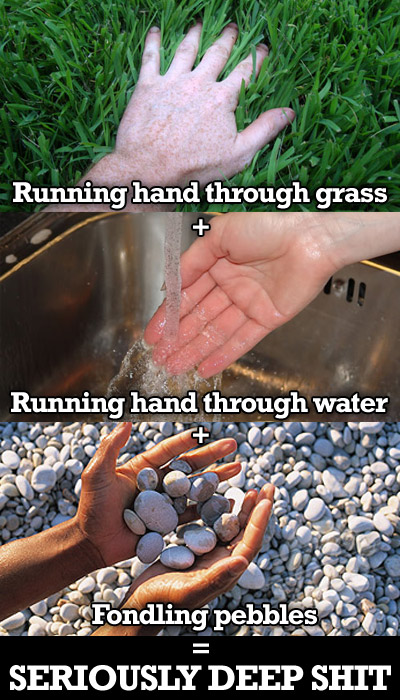 The ending too is a touch trite – Malick looks to have aimed for an ethereal otherworld but it just looks like the finale of Lost. It's here where the barrage of seemingly unrelated – if artfully displayed – images reaches its peak. Feel free to either tune out completely or debate at length in the film's Wikipedia discussion section – either way, it does tend to grapple you out of the moment as you attempt to decode what you're seeing.

Blimey, all this without even mentioning the dinosaurs! Part-way through The Tree Of Life, Malick begins to ponder life, the universe and everything, and – leaving the O'Brien family behind for now – we relocate to the dawn of existence and the gloop of primordial soup, as created by Stanley Kubrick's special effects guy, Douglas Trumbull. This is by far the most fascinating offshoot of The Tree Of Life – and you'll be happy to hear it's being released separately in a full-length IMAX release entitled The Voyage Of Time. As it is, it's a welcome tangent from the main focus, even if the occasional whispered religious quote acting as a quasi-narration doesn't quite explain its inclusion.

If you're completely intolerant to bullshit, you'll struggle with The Tree Of Life – it doesn't exactly welcome curious viewers. But – and I hate myself for using this phrase – open your mind a little and be prepared to entertain a different, but no less valid, form of entertainment, and The Tree Of Life can be an enriching, soulful experience. All the big themes are tackled, however clunkily they're shoehorned into the screenplay – it's fair to say that everyone will get at least something out of this film.

More:  The Tree Of Life  Terrence Malick  Sean Penn  Brad Pitt  Jessica Chastain
Follow us on Twitter @The_Shiznit for more fun features, film reviews and occasional commentary on what the best type of crisps are.
We are using Patreon to cover our hosting fees. So please consider chucking a few digital pennies our way by clicking on this link. Thanks!