The first Purge movie had a fantastic concept: that sometime in the near future, in order to pacify the populace for the rest of the year, all crime including murder would be legal for one night only. The biggest crime, however, was just how wasted the concept was on a home invasion storyline that barely ventured outside of Ethan Hawke's front door. Thankfully, this year's sequel The Purge: Anarchy goes some way into exploring that ridiculous concept to a more satisfying degree, and in pulling back to a wider angle to see the effect of The Purge on a whole city instead of a single household, it pulls off a pretty good impression of The Warriors to boot. It's time to come out to pla-aaay...


There is an image near the beginning of The Purge: Anarchy that is so striking, so simple and yet so laden with portent it sums up the film in a nutshell: with the annual Purge begun, we see a lone redneck walk out onto his building's rooftop, carrying just a six-pack of beer, a sniper rifle and a smile. That is the concept of The Purge boiled down to its essence: that terror does not necessarily come from overseas, with brown skin wrapped in a turban, but that it is latent from within – the domestic outlier with an itchy trigger finger who is one government sanction away from happily popping caps in skulls on a Friday night. The rest of the film struggles to sum up The Purge's ethos quite so succinctly, but Anarchy is nonetheless full of great ideas, most of which it has knowhow – and now the budget – to execute. 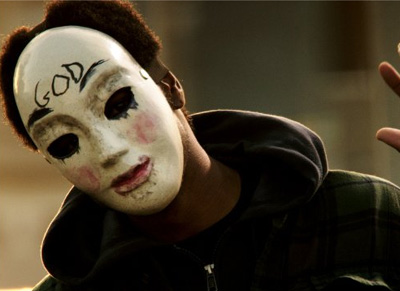 Spoiler: they spent it all on masks.


Central to the story – although there isn't really much of a story to speak of, just a series of clumsily-connected set-pieces – is Frank Grillo, who having been cheated out of a Death Wish reboot with director Joe Carnahan channels some impressive Charles Bronson chops here instead. He plays a nameless lost soul, tooled up and ready to Purge for a reason that's hidden until the third act, who inadvertently comes to play protector for a group of survivors who band together and aren't all that keen on being sliced into little pieces in the name of urban pacification. Grillo – so great in The Grey, equally brilliant in Warrior – is not required to do much other than scowl, but at least he's good at it. If the time comes to reboot The Punisher again, look no further, unimaginative executives of Hollywood.

Though the action comes in fits and spurts, this is to accommodate the wealth of ideas that writer-director James DeMonaco is committed to squeezing from the concept of the Purge. There's a political angle (featuring a party broadcast from the 'New Founding Fathers' aka Sarah Palin's vision of the future); there's a sequence inside a family safehouse (proving that a locked door does not necessarily equal safety); there's even a discussion on the socio-economics of the Purge, and how letting the poor murder the poor is a way for the 1% to distribute wealth upwards. The only element that doesn't really play is Michael K Williams' Black Panther-esque team of freedom fighters, who would probably be taken more seriously as an anarchic political force if they did all their killing and liberating on literally any other night than the Purge, which effectively renders their raging against the machine perfectly legal.

Casting the theological net wide means that the The Purge: Anarchy is not a character piece as a result – that much will become evident during an early scene in which the entire cast are gathered in a car and leave a question hanging unanswered for what seems like an eternity, as if the page in the script was accidentally eaten by a dog. But it is a horror movie that's crammed full of inspired moments and powerful imagery: a stranded woman drenched in blood glimpsed from the back of a moving vehicle; a flaming bus that careens across a junction; the sight of a wealthy family, unwilling to get their hands dirty, purging on a sickly volunteer in their own plastic-sheeted lounge. 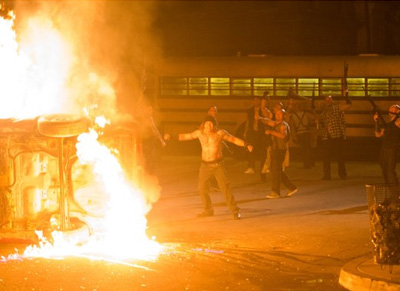 Just another night in Millwall.


Such images speak louder than the dreadful dialogue, which is perfunctory at best and embarrassing at worst; the tone is so gloomy it's often not possible to detect when characters are making jokes (hint: not often). There are some character beats that don't quite work: Grillo's story arc has a predictable resolution, and the film's insistence on creating a specific villain seems redundant on a night when everyone is a villain. But The Purge makes no real attempt to escape its genre trappings and DeMonaco doesn't so much wear his influences on his sleeve as have them tattooed on his arm; there are pleasing resonances of John Carpenter and Walter Hill if you're attuned to their frequencies.

Yes, the concept of the Purge remains ridiculous and unworkable – imagine the paperwork! – but this is a B-movie with A-grade ambitions. With ideas way above its station, The Purge series already feels like an incredible concept in search of filmmakers with equally sky-high aspirations, but for now, it is a thrilling alternative to your toothless Saw VIIs and your horror reboots, with pulpy potential to spare. Bring on the next annual Purge - I'll be waiting with a six-pack, if not a sniper rifle.

More:  The Purge Anarchy  The Purge  Frank Grillo  Kiele Sanchez  Michael K Williams  Horror
Follow us on Twitter @The_Shiznit for more fun features, film reviews and occasional commentary on what the best type of crisps are.
We are using Patreon to cover our hosting fees. So please consider chucking a few digital pennies our way by clicking on this link. Thanks!