I had two criticisms of 2012's The Raid. First, for all its endless, mesmeric punchkickery, it was a little light on character for me. Second, after I'd nodded off halfway in, as any 34-year-old man presented with a warm, dark room is wont to, people kept on waking me up with spontaneous applause. Not only was I now awake, which is annoying in itself, I'd just missed a really good bit. Two years on, a 150-minute sequel sounded like a great opportunity for a proper kip. But no, director Gareth Evans only had to go and make a wonderful, sprawling, epic crime drama even I couldn't sleep through. The bastard.


Like an idiot I couldn't see how an extra 50 minutes would do anything other than spoil the Raid format. What was he going to do, stick an extra ten floors on the building? Add a bonus round where Rama got to play as M. Bison? I was, as I nearly always am, wrong. What I hadn't anticipated was the scope to take the already-flawless concept of a man punching people over and over again in the throat, and add a story to it.

Not that The Raid 2 is at all thrifty with the throat-punching, you understand; far from it. It contains a glorious, fan-bait showcase return for Yayan Ruhian, a stunning set-piece car chase and a one-eyed deaf woman who hits people with hammers. But its real achievement is its story, which - while not wildly original - is well structured, ticks all the boxes you'd want a modern crime drama to, and adds some much-needed flesh to the skeleton. The skeleton of FIGHTING. 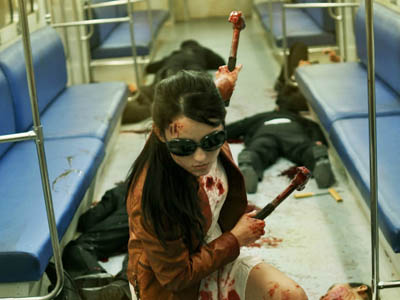 Yeah, hate it when people lean against the pole so no one else can hold on to it. These guys got off light.


So straight after he's got back down from the tower, Rama doesn't even have time to post his selfies from the observation deck on Facebook before he's enlisted to go undercover in the Bangun mob family to unearth police corruption. For verisimilitude he has to go to prison, where he participates in a spirited 20-man fight in the mud, which plays out like the Batley Townswomen's Guild re-enactment of the battle of Pearl Harbor with better choreography. Having proved himself to Bangun's son, Uco, he's in, but soon finds himself in over his head.

Uco's the typical hot-headed mobster's firstborn, see: frustrated at his father's mellowing with age and inclination not to seek revenge. The more tetchy he gets, the more he spirals out of control and the harder Rama has to work not to blow his cover. 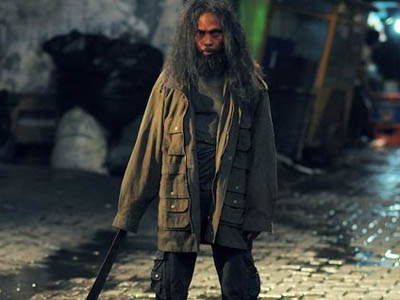 Trust me: if this guy asks you for 50p because he needs to get to Dorking to see his sister who's not well, JUST GIVE IT TO HIM.


There is more focus to the fighting this time around; it seems more contextualised, justified, slotted into a more satisfying overall structure where its predecessor just angrily kicked you in the goolies. Only Ruhian's return as Prakoso, a deadly assassin now living as a tramp, feels a little forced: there is backstory about a son to whom he is denied access, but his arc doesn't fit anywhere neatly, and it's ultimately inconsequential. But it's hard to care too much when he's fighting off a death squad in a nightclub with such expert staging. You can't fail to be thrilled by these fight scenes; the mastery of technique on the martial artists' part is equalled by the camerawork, never crowding the performers, never preventing you from seeing the full picture.

As if to prove he can shoot more than just massive dust-ups, Evans also wheels out a spectacular car chase through the streets of Jakarta, involving one bravura shot which tracks alongside the vehicle, leads us in through the window close enough to see the driver sweating, then brings us back out again, moving up to show a car following close behind with a gunman leaning out of it. You know at times like these that you're in the hands of a hugely accomplished action director, one who has absolutely nailed this genre piece, taking broad operatic themes of tragedy and betrayal and packing them into two and a half bloodsoaked hours with supreme confidence.

More:  The Raid 2  The Raid  Gareth Evans  Iko Uwais  Arifin Putra  Oka Antara  Tio Pakusadewo  Alex Abbad  Julie Estelle  Ryuhei Matsuda  Kenichi Endo  Yayan Ruhian
Follow us on Twitter @The_Shiznit for more fun features, film reviews and occasional commentary on what the best type of crisps are.
We are using Patreon to cover our hosting fees. So please consider chucking a few digital pennies our way by clicking on this link. Thanks!