You have to wonder why, after the release of The Exorcist, anyone has ever bothered to make another exorcism movie. It's like somebody now making a film about a theme park filled with dinosaurs - it's been done to its fullest extent already. And yet exorcism films continue to be churned out on an annual basis. Can The Rite add anything new to the ‘demonic possession' oeuvre? Erm… well, there's Anthony Hopkins…

…and that's about it. But, with Hopkins' mixed-up career of highs and lows, that can sometimes be enough. He has, after all, often flirted with Nic Cage levels of brilliantly dire over-acting - just look at his Van Helsing in Bram Stoker's Dracula. And in this film, he stumbles through his entire acting range - from lazy, stilted line delivery to balls-out mentalist improvisation. And, tellingly, it is only when the latter appears that the film really becomes worthwhile viewing.

So, taking more than a few pointers from The Exorcist, we follow Michael Kovak (O'Donaghue), a troubled young guy studying to be a priest despite having clear doubts about Catholicism and displaying a cynicism more befitting of an outright atheist. This somehow becomes a reason for him to be sent off to study exorcism under the mad bad bastard ways of Father Lucas (Hopkins), a renowned priest who claims to have cured thousands of possessed victims. Cue lots of moral wringing and implausible scepticism before the big supernatural showdown.

Now that he had mastered the 'M', he just needed two other people to do the 'C' and the 'A'.


Along the way there are lots of thankfully subtle visual effects, which add to the more serious tone of this fantastical thriller rather than overloading it with CGI. The best of these is in the colouring of the possessee's faces, which switches between faint shades to show that there is something unnatural at work. It sure beats fake veins and blood vessels with blackened eyes… all of which appear in the film's big finale.

However, it is actually this climactic ending that saves the film from being too dull and inane. While the first two thirds of the film spends too much time on overwrought religious pondering and an incomprehensible family background (starring the underused Rutger Hauer as Kovak's dad in a series of melodramatic flashbacks), the final third is when the film hits its stride. Whereas, before we were faced with the mystery as to whether demons actually are at work or whether these possessed souls really are, as Kovak insists, just in serious need of psychiatric help, the final act projectile vomits evil, paranormal forces right in our face and The Rite becomes a more enjoyable film for it. 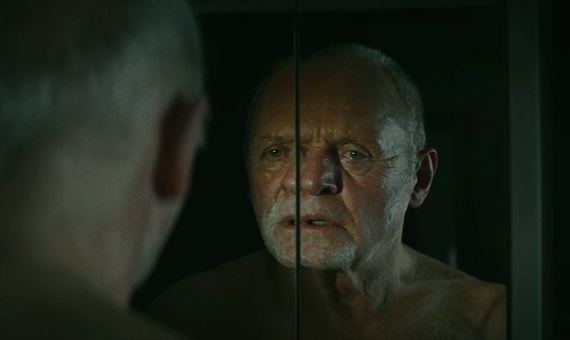 
And this is mainly down to Hopkins' hilarious histrionics because, as his Father Lucas succumbs to his very own demonic intrusion, the legendary actor goes from a confused old man apparently struggling to remember the script, to a devious, taunting A-hole. At one point, which I can only hope was ad-libbing on Hopkins' part, Father Lucas rips the piss out of Kovak's entire generation by yelling "Cool, awesome, whatever… dude!" right in his face. He then follows this up with whiny, Welsh-accented rant in a silly-voice, which, although hugely entertaining, will just leave audiences thinking about the movie's title, as in "Erm… Riiiiiiiite".

Nevertheless, therein the film is saved, purged, if you will, from the invasive religious meditation that tries to pretend this film has a point to make. It doesn't. But it does offer up a few scenes of utter absurdity from a grown man who really should know better, and that's almost as good.

More:  The Rite  Anthony Hopkins  Exorcism
Follow us on Twitter @The_Shiznit for more fun features, film reviews and occasional commentary on what the best type of crisps are.
We are using Patreon to cover our hosting fees. So please consider chucking a few digital pennies our way by clicking on this link. Thanks!