2004. Anyone recall what happened that year? There was a football tournament I think? I do remember failing my first driving test because I went to see Dodgeball that same night to cheer myself up. And in a tedious way to link to this film, that was the last time Ben Stiller and Vince Vaughn shared a screen together. Since then, neither has really been keeping the funnies consistently flowing. I passed my driving test by the way.


But thanks to the imaginative, dirty minds of Seth Rogen and Evan Goldberg, one-third of The Lonely Island, a skinny Jonah Hill carrying on where he left off in 21 Jump Street and a cracking fish-out-of-water Hollywood debut from Richard Ayoade, the veteran 'Frat Pack' boys are back to their circa 2003/4 best. 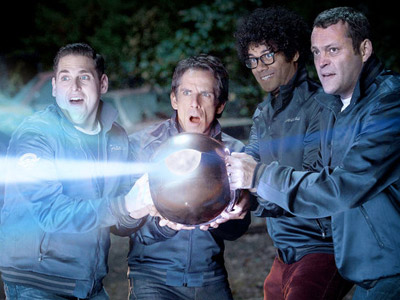 And that alien threat is... a big, bright, shiny lighting whatever.

Meanwhile, it's business as usual for Ben Stiller, doing his typically uptight everyman shtick while Vince Vaughn – harking back to his Old School days - is on hand as the enthusiastic instigator of all the fun-times and shenanigans. But the chemistry between the two of them is unsurpassable. Reunited at last, it's the best the pair have been in a long time – a timely reminder why they were the kings of comedy almost a decade ago. Throw in Jonah Hill and a scene-stealing Richard Ayoade, and you’ve got four likable characters to root for. 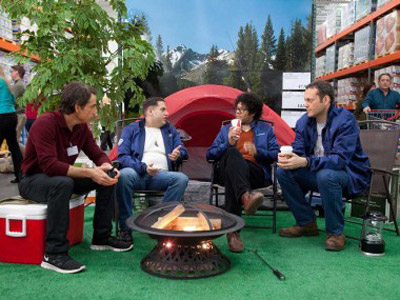 Horrible people never go camping together. ROOT FOR US.


The four leads are given their moments to shine and they all bring something unique to the party – no one is left in the shadows. Hill’s Frankin is an unbalanced weapons nut and wannabe cop, Ayoade’s Jamarcus dreams of 'assisting' a lonely Asian housewife, Bob wants to keep an eye on his promiscuous daughter while Evan starts community groups as a way of making friends. The script may be laden with crude phallic gags but the quality of Seth Rogen, Evan Goldberg and Jared Stern’s free-flowing, dialogue-heavy writing can't be faulted.

The odd idea misses the mark, one of which explains the casting of Ayoade but comes to nothing nor adds anything to the film. But Saturday Night Live and Hot Rod director Akiva Schaffer does a decent job at juggling both a gross out, foul-mouthed buddy comedy and an Invasion Of The Body Snatchers-like sci-fi. So, four likeable, very different characters flung together to save the world? We better make the most of The Watch because it’s likely the closest we’ll ever get to a third Ghostbusters movie for some time.

More:  Ben Stiller  Vince Vaughn  Jonah Hill  Richard Ayoade  Akiva Schaffer  The Watch
Follow us on Twitter @The_Shiznit for more fun features, film reviews and occasional commentary on what the best type of crisps are.
We are using Patreon to cover our hosting fees. So please consider chucking a few digital pennies our way by clicking on this link. Thanks!