We Still Kill The Old Way

I do enjoy a good London tear-up movie. A year after the unexpected pleasure of Vendetta, Richwater Films is back with We Still Kill The Old Way. Its charms are more uncomplicated and its politics are a bit iffy, but it continues to demonstrate that what Richwater delivers is a cut above the usual British crime fare.


You feel like you're in safe hands from the off, with an authentically sixties-era opening credits sequence following Ian Ogilvy's retired gangster Richie Archer driving through Spain. Back home in London, though, his brother Charlie (Steven Berkoff) tries to break up a back-alley gang rape and gets beaten to death for his trouble. The gang of hoodies and inveterate tooth-suckers, led by Aaron (Danny-Boy Hatchard off of being Danny Dyer junior in Eastenders) don't care that Richie and Charlie used to run the show around here. But once back home, Richie assembles his old crew for revenge. 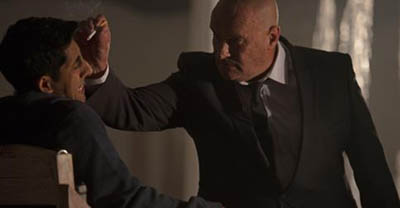 Never an ashtray around when you need one.


The revenge plot is pretty straightforward. Hatchard makes for a wholly unlikeable target, deliberately pushing the character as irredeemable. (He's such a badass, even the inside of his own flat is covered in graffiti.) It's largely a success: though his accent strays into hoodie caricature, the character choices he makes are bang on. Ogilvy is a charming, unflappable lead, perfectly cast, and his crew (James Cosmo, Chris Ellison of Burnside fame, Tony Denham) have a lot of fun as a sort of Expendables via the British Legion, with plenty of inventive torture. Hooray!

It runs into trouble, though. It's a film that wants you to accept the idea that hoodies are feral and incapable of understanding moral truths, the police are useless or uninterested, and taking matters into your own knuckledustered hands is the way forward. Lizzie, one of the older generation, reports Charlie's murder to the police then is wilfully obstructive to them without giving them a chance to investigate, making you wonder why she called them in the first place. This includes her scoffing when the detectives inform her they need evidence in order to make an arrest. You're supposed to applaud her for this. Evidence! It's PC gone mad. 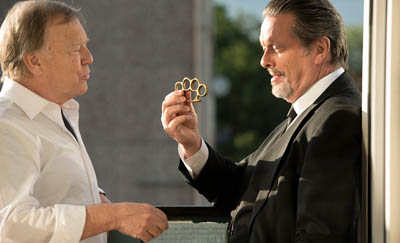 "I appreciate the gesture, but to be honest my knuckles don't get that dusty."


Much of this attitude is advanced through nostalgic contemplation of the Good Old Days, when villains were gents and the streets were safe. Richie and the gang could always be relied upon to keep the peace, we're constantly reminded. It's convenient that we're never shown any of the crimes they committed when they were younger, only those of the modern-day hoodies. Presumably they were all benign, victimless capers; blags carried out with a doff of the hat and a detour on the getaway to help an old lady across the road. But then the amount of pleasure they derive from torture suggests maybe not.

This sort of celebration of DIY vigilantism is fine and dandy but is usually achieved through a lead who only kills when he has to (The Equalizer, Jack Reacher, Rambo, etc) and derives no pleasure or financial gain from it. It's more problematic here, and is why We Still Kill doesn't wholly succeed. The proposal of a sequel in which the gang set their sights on robbing the bonus-hungry bankers who are arguably the root cause of more East End woes (the hoodies, you could make the case, being more of a product of their environment and therefore having more in common with Richie's gang), suggests a straight hero/villain narrative that'll be easier to get to grips with.