No one was more surprised than me when I sat down to watch Yogi Bear and was actually confronted with an utterly fantastic update of one of my favourite childhood cartoons. The gags kept coming, each as sharp and funny as the one before, as I giggled away in my seat like the 8-year-old me did all those years ago. Alas, I'm not talking about the abysmal Yogi Bear movie itself, but the brilliant new Wile E Coyote and Road Runner 3D short shown beforehand.

Using bold new animation and in three crystal-clear dimensions, Wile E Coyote has actually never looked better, and with the early introduction of a segway, it's easy to tell that this is the new modern-day Road Runner hunt ' updated for the 21st century and all the better for it.

Despite this new form of transport taking up the majority of the short, with the writers finding new imaginative ways to let this simplistic one-man vehicle thwart Coyote's attempts to capture his prey, the film is still somehow crammed full of all the familiar gags and set-pieces, including knowing nods in the form of falling boulders and plenty of cliff-top crash landings.

If only Acme delivered takeaways.


And yet this new animation only ever feels completely fresh and original. The slapstick humour and sight gags may be old hat in theory, but the timing is nothing short of perfect, whether it be the moment that a pitiful Coyote realises he has failed his latest attempt and is about to suffer a painful injustice, or when a smug Road Runner stops by his incapacitated nemesis and lets out a gloating "Meep meep!" ' it's just so spot-on, eat-your-hearts-out-Pixar, unfailingly funny.

Unfortunately, the brilliance of this cartoon was always going to be overshadowed by the main event and, therefore, it cannot go much towards the overall rating in this review. But, for sheer experience, Wile E Coyote and his elusive Road Runner have earned themselves an extra 'star for what, as it turns out, is a superb, modernised retelling of a simple classic.

Which is something that the makers of Yogi Bear could only hope for with their run of sketchy jokes and appallingly over-acted catchphrases all strung together by the hokiest of 'family entertainment' plots. The two rangers (him from a guest spot on Scrubs and him who auditioned with a live bear for the part) are more cartoonish than their animated counterparts and Anna Faris doesn't so much give a car-crash performance as look and act like she has just literally climbed out of a wrecked vehicle. The real film fail is Yogi himself though who is just an unlikeable, bumbling dickhead ' a selfish, clumsy, creepy food-thief. 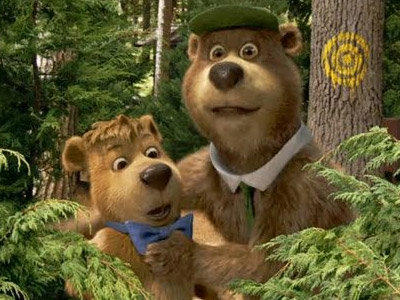 "Now, remember Boo Boo - this is our little secret. If you tell Ranger Smith about what we're doing, he'll only be angry with you."


It's a terrible, dumb, unimaginative film that really isn't worth the price of a cinema ticket ' even with, and it pains me to say this, the excellent Road Runner short that comes before it. At least that will eventually appear on YouTube.

More:  Yogi Bear  Dan Akroyd  Justin Timberlake
Follow us on Twitter @The_Shiznit for more fun features, film reviews and occasional commentary on what the best type of crisps are.
We are using Patreon to cover our hosting fees. So please consider chucking a few digital pennies our way by clicking on this link. Thanks!