I SEE YOU, MCU

As is the tradition for all Hollywood classics, completion of principal photography on Captain Marvel was officially announced at the weekend with a Twitpic of a graffiti-ridden slate and a homemade calendar drawn on to a scrap piece of paper. But look a little bit closer and we can start to glean some plot details and clues about what lies ahead for the MCU...


For Captain Marvel, we are now at the stage of a Marvel film’s life-cycle where we are starting to get actual facts rather than a hundred fan theories about what the Red Skull might have done to that Soul Stone for entertainment while waiting for someone to turn up. For instance, we have learned that Djimon Hounsou will be back to reprise his role as Korath from Guardians Of The Galaxy, as will Lee Pace, returning as the fan favourite villain with the most memorable of motives, Ronan The... Denier? Remoaner? Something like that.

Plus, in keeping with the film’s 90s setting, we now know that Samuel L Jackson is going to be de-aged for the entire length of the film, despite looking the exact same age since birth. The same treatment will be given to Clark Gregg, and the thought of seeing a wet-behind-the-ears Agent Coulson get his first experience of big space baddies is genuinely really exciting for those of us still watching and enjoying Agents Of S.H.I.E.L.D. Honestly, our WhatsApp group lit up when that news broke.

But take a look at the photo that star Brie Larson shared on twitter when announcing that filming has wrapped. Spot any other clues about the film’s plot? Here’s what we noticed... 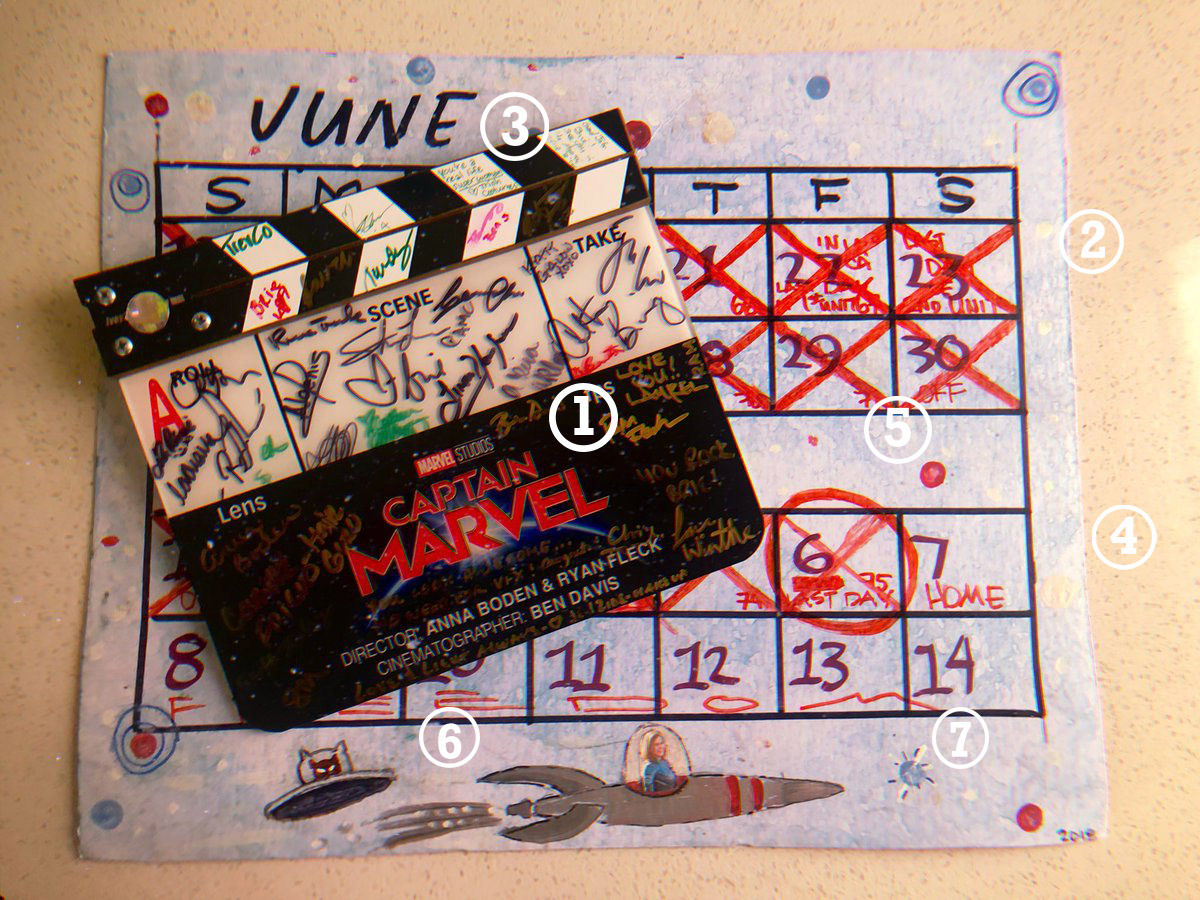 This version of the Captain Marvel film logo clearly incorporates part of the Universal logo into it, which is the biggest confirmation yet that this film will feature a crossover with The Fast And The Furious universe. It only makes sense for Dom Toretto’s family of car-loving thieves to help protect Earth during the Kree-Skrull War, and this would definitely be in keeping with rate of escalation we have seen so far from the Fast And Furious franchise.

My money’s on that not being the whole extent of Universal’s involvement though, and I wouldn’t be surprised if we saw E.T., the Minions and the cast of Mamma Mia all taking up arms in the final battle sequence too.

If you look real closely on Brie Larson’s calendar, she has clearly written "Last Day 1st Unit" on Friday 22nd June and "Last Day 2nd Unit" on Saturday 23rd June. The word 'unit' in this instance can only refer to the military term for squadrons, so we now know on which dates the separate alien army factions will be defeated.

Among all the signatures here, you can just make out one from someone called Trish Costumes who has written a note to Brie Larson claiming "You are a real-life superwoman", which is huge if true.

According to this calendar, 7th July is the day that Captain Marvel finally gets back home after her epic adventures across all of space. While we don’t know yet where her home is, what condition it will be in and who – if anybody – will be waiting for her there, the fact that she makes it back at all should be considered a huge spoiler that Marvel have surprisingly let slip this early on. Knowing that Captain Marvel definitely survives the events of this film not only lowers the stakes for audiences upon release, but also means we can start to speculate about the odds of her appearing in other planned MCU films coming up too. But who knows when we’ll start to get confirmation of that longer-term plan.

The eagle-eyed among you will have spotted several Xs dotted across the whole of this page, which of course refers to the number of X-Men characters crossing over into the Marvel universe now that Disney have definitely bought Fox or whatever. Each X indicates a different X-Men character, and there’s no telling from this which ones they are. Although the one with the ring around it on 6th July almost certainly represents Circle Kirk, the hugely popular member of the team who has the power to harness the destructive power of Pi thanks to his skeleton and organs being housed in an adamantium bathtub filled with that jelly you find on the inside of pork pies.

This first look at the early concept art for the aliens and spaceships used throughout the film show that we are in for a retro, simplistic look and feel, with a largely two-dimensional design. This is thought to be a cost-cutting exercise for Marvel, who are looking to claw back some money after spending 20 million dollars on digitally erasing Hawkeye from Avengers: Infinity War.

Look closely under the slate and you can just about make out what looks like the word 'FREEDOM' written across the final week in the calendar. There has been some speculation that this refers to freedom from life, as Captain Marvel succumbs to the sweet release of death at the hands of the merciful Thanos and his effective, constructive plan to bring balance to the universe. If I were to hazard a guess though, I would suggest that there’s no missing letter here, and this is just a personal note from Brie Larson to herself, celebrating her 'FEEDOM' and all the bank she’s going to make as a Marvel star now.
Did we miss anything? Tell us on Twitter or Facebook or something, because we got rid of the Comments section so that we didn’t have to deal with all of you guys telling us we’ve missed something.

More:  Captain Marvel  Brie Larson  Marvel  MCU
Follow us on Twitter @The_Shiznit for more fun features, film reviews and occasional commentary on what the best type of crisps are.
We are using Patreon to cover our hosting fees. So please consider chucking a few digital pennies our way by clicking on this link. Thanks!