There's a slight chill in the air as I arrive at London's Dorchester Hotel at 8.55am on a grey November morning. I am directed to the Executive Suite on the fourth floor, where I'm told Olivia is having breakfast; I thank the friendly PR and make my way into the extravagant dining suite, where all manner of jams, marmalades and pastries are laid out alongside eight blends of coffee. Colman is sitting eating alone, and when she sees me she stands up, smiles and greets me warmly, the sun refracting off the room's chandelier, lighting her up like a true movie star from the Golden Age.

None of this is true, of course, because my interview with Olivia was conducted over email, but I've always wanted to write one of those wanky GQ interview intros where the writer fills up his word count with about a thousand words comparing his subject to an ancient Aztec princess or Anne of Cleves or some shit.


The Olivia Colman of reality is, quite simply, the nicest, most down to earth actress I have ever had the pleasure of meeting. The first time I interviewed her was back in 2011 after I reviewed Paddy Considine's British council estate drama Tyrannosaur, in which Colman plays an abused wife who sparks up a tentative friendship with Peter Mullan's gravel-voiced alcoholic. It's a heartbreaking performance in an astonishing film, and my review caught the eye of Olivia and her husband, who got in touch and agreed to let me email her some questions for a site interview. I later found out she'd composed her answers on her phone while on the bus.

Later that year I met her in person at an awards do and not only did she remember me, she quoted bits of my own review back to me. The fact that I am still pre-ambling should tell you that this is extremely rare in industry circles. Or it is for me, anyway.

"
"
She's worked with Meryl Streep, co-starred with Dench doing Agatha Christie for Branagh, and she has Bill Murray stories
Anyway, that was seven years ago, and in those seven years, Colman has gone from strength to strength: from being cruelly snubbed at the Baftas to unstoppable global acclaim and success. It's no exaggeration to say she's one of the most in demand actresses in the world, and I always cherished the fact she took the time to answer my shit questions and humour me in person. I think everyone in movie journalism (if you can call it that) has that one lovely interviewee who they champion for the rest of their career, based even on the briefest of interactions.

Now Olivia Colman is promoting her new movie, Yorgos Lanthimos' royal black comedy The Favourite. Her incredible performance as the needy, fragile monarch Queen Anne has already won numerous industry awards and she's one of the favourites for Best Actress at next year's Oscars. She's worked with Meryl Streep, co-starred with Dench doing Agatha Christie for Branagh, and she has Bill Murray stories. She's about to play another Queen - the Actual Fucking Queen - in The Crown, the biggest show on television.

Imagine my surprise, then, to see an email plop into my inbox, with the offer of a screening and another email interview. This is not typical. This is above and beyond the kind of access that sub-par bloggers like me usually get. This is what you get with Olivia Colman: not just the most talented actress in the business, but the nicest too. 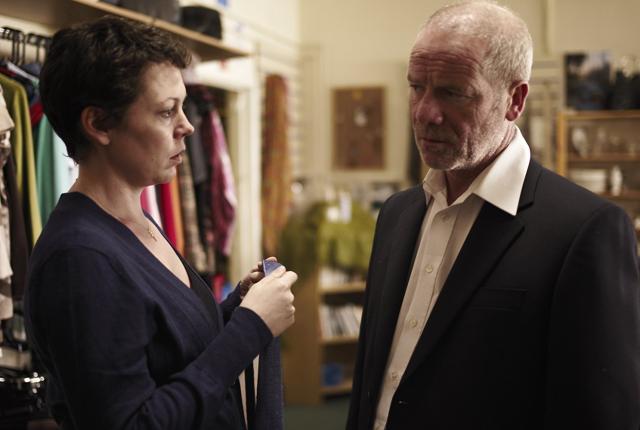 : Last time I interviewed you, for Tyrannosaur in 2011, you said if you ever won an Academy Award you'd perform "an impromptu rap" in your acceptance speech. So: what kind of rhymes should we expect from you at next year's Oscars?

Olivia Colman: Ha ha! I don't want to reveal too much. I've got big things planned. Rap is very much my thing, as you've probably guessed, so I'm really looking forward to showing the world what I've got. Should the Academy elect to give me that opportunity.

: How do you like awards season? It seems like depending on how seriously you take it, it could feel like either a hugely stressful and exhausting slog, or a series of massive piss-ups and back slaps. Is that about right?

: The Favourite is so entertaining, I didn't want it to end. Naturally you are absolutely brilliant in it. Did it turn out like you hoped? Was the experience what you expected?

OC: Well, thank you very much! Very nice of you. I didn't really know what it would look like, camera angle wise and all that, but the script was so good, you'd really have to go some to screw it up. And its Yorgos innit. You know you're in amazing/weird hands (weird hands are the best!). It was such a fantastic bunch of people, everyone on the crew, Yorgos, Emma and Rachel. I hoped it would be great, the making of it surpassed my hopes. It was an absolute ball.

: Do you have a particular affinity for the pomp and the grandeur of the old period stuff? 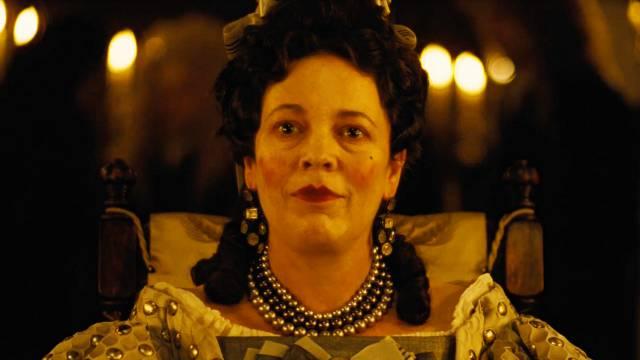 Check out the rhymes of MC Anarchy (it's a play on the word 'monarchy'- oh, never mind)

: The costumes by Sandy Powell are incredible. I'm thinking specifically the mad suit of armour thing they put you in. Did you have a favourite?

OC: Yeah! I liked that one. I loved all of Nick Hoult's costumes, no one could look him in the eye, we had to act to his forehead ‘cos he looked so funny in his outrageous outfits. I liked my nightie, too. Very comfy!

: I imagine that Yorgos Lanthimos is a special kind of guy to work with. How does the dry, dark humour of his movies manifest itself on his sets? Is he a fun director?

OC: He's one of the warmest, sweetest people. It's odd, in his company you forget that his head is a whirl of weirdness, he's the most fun. There are no rules really. Apart from ‘Don't think too hard, just do it'. Fine with me!

"
"
I have encountered mercifully few wankers in my career

: You do some great yelling in The Favourite. What was your favourite line to yell?

OC: I'm really glad you picked up on this. Yelling is my favourite mode of communication after rapping. And the advantage of yelling is that I can use it in my acting. Easily my favourite line to yell was "Look at me, don't look at me!"

OC: Too much rabbit faeces? I don't understand the question.

: Someone at a recent Q&A asked you how you got in the headspace of a character like Queen Anne and you played it down and sort of said you just learn the lines, turn up and do what you're told. I like your honesty, but have you ever played any role before where you've thought ‘Oh bloody hell, I should probably do some homework'?

OC: Shit yeah! My first day on The Crown I was playing The Queen as a Brummie. Actually – true story – I once went to a read-through for a radio thing, directed by someone very well respected. I'd just had my first child and was struggling a bit with everything, and my preparation for that day left a bit to be desired. I only realised about 10 pages into the read-through that my role was the main part. By page 12 I'd been recast. Brutal. But I deserved it. 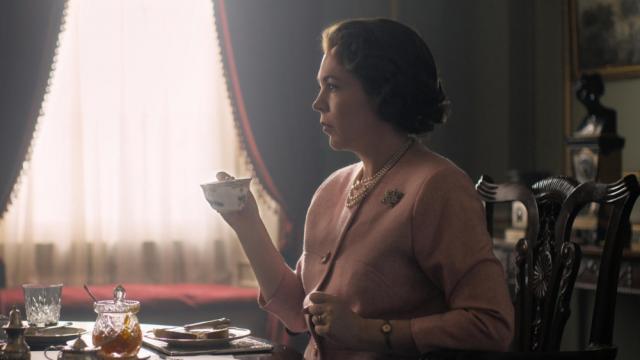 Colman as The Queen, drinking a CUP-A-SAAOUUP

: Can you watch yourself in your own movies?

OC: Yeah. Mostly, it's okay. I like watching them mainly to see what everyone else did in the scenes I wasn't in.

: You're taking over the role of Queen Elizabeth II in The Crown. Is it weird playing The Actual Queen? It must be a tiny bit weird. She's on all the money!

OC: I know! And we used to lick the back of her head, before they made it self-adhesive! To send letters, I mean. No, it definitely is a bit weird. But you get over that pretty quickly, once you've got the scripts. Good scripts (and these are goooood scripts) are a world entire – they create a whole new universe, so as an actor you can kind of forget the 'real' world beyond it, and just get on with saying your lines in this one (although you do still have to listen to the dialect coach who's telling you to stop doing it Brummie. And the movement coach who's reminding you that although you walk like a farmer, the Queen herself doesn't).

: You're now a massive and well-deserved HOLLYWOOD MEGASTAR. What is the most properly starstruck you've ever been?

OC: Ha ha! I'm going to have that as a rider on all my contracts now. Umm, most properly starstruck... I think first meeting Paddy Considine. And sitting near Tina Fey. OH, and blurting out to Kate Bush that I loved her!

: Conversely - and naming no names, obviously - but have you ever worked with someone famous who turned out to be a massive wanker?

OC: The successful ones are usually really nice people. It's the ones who haven't got where they think they should be that are the wankers. Then again, there are of course lots of people who haven't got where they – and, frankly, I – think they should have got, who are also really nice people. Basically, I have encountered mercifully few wankers in my career. They do exist though!

: Quick Peep Show question: in your considered opinion, does Sophie end up with Jeff, and more importantly, is she happy?

OC: See, the trouble with this question is that fans of shows like Peep Show – and I should say I have never met a Peep Show fan I didn't like – always know more about the show than I do. So I'll give my answer and everyone will go, shitting hell, Olivia Colman knows nothing about her own bloody character!

But… fuck it, let's do it… So, I always thought Sophie wasn't really a very nice person. And Jeff obviously wasn't very nice. And what happens when two not very nice people end up together? Does it equal happiness? They kind of deserve each other, but that doesn't mean they suit each other, or that they're going to be happy together in their not very niceness. I think the opposite happens, probably. They make each other unhappy. Because maybe they start to see their own nastiness in each other. But maybe that realisation is Sophie and Jeff's shot at happiness – at self-knowledge and the chance to amend their ways. Or maybe, because they're fundamentally dicks, they're unable to take that opportunity? Probably it all depends on if they've stayed in Croydon or moved to Purley.

: Important: What are the best crisps?

OC: Couldn't give a toss.

: One more thing. If you win the Oscar for Best Actress, which obviously you will, please read my full web address aloud, slowly and clearly, by way of thanks for my support. This isn't really a question, I guess, but go on, sort me out.

OC: Of course! If I remember.
She won't remember.

More:  Olivia Colman  The Favourite  Interview
Follow us on Twitter @The_Shiznit for more fun features, film reviews and occasional commentary on what the best type of crisps are.
We are using Patreon to cover our hosting fees. So please consider chucking a few digital pennies our way by clicking on this link. Thanks!