Having confidently predicted last week that we were heading for a non-committal ending, inevitably I've mugged myself. Here, three episodes out, is the planet-killer. Don tells us this is the beginning of something, not the end, but the last time he told the truth was in about 1967 and it was only to tell Roger he couldn't pull off a kaftan.


But first: Peggy is a woman, it turns out, and not all that chuffed about how women are still treated, even now it's the seventies and all civil rights issues have been 100% resolved. She's riled because a woman yelled at her for allowing her daughter to staple her finger. (Significantly, Peggy let the kid play by sitting at the desk and pretending to work: Peggy's instinctive idea of role-playing, and not just the absence of anything else to distract her.) "You do what you want with your children, I'll do what I want with mine!" the woman said, and what do you know, there's subtext.

Peggy did do what she wanted with her child, giving up her baby for adoption way back in season one, and we've since seen only in flashes how it's affected her. When Don told her by her hospital bed to move on and forget it ("It will shock you how much it never happened") he was almost inviting her to be like him: cover up the past, lie to yourself and start taking meetings. It's all the same to the other guy in the room. This was what set Don and Peggy on their parallel paths. And yet the ultimate inequality has been that Don was able to reveal his secret of growing up in a brothel, and even of having been Dick Whitman. It set him back a few months and almost got him fired, but it didn't finish him. If everyone knew Peggy's secret, she'd most likely lose all her power and the respect she's earned. 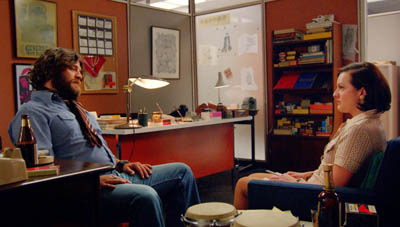 Then she'd have to give it all up and join Stan's Bee Gees cover band.


The scene that follows, in which Peggy upbraids Stan for saying the woman shouldn't have kids, is significant in that she finally trusts and allows a man other than Don to know about her past. Stan's at about the default level of sexism alongside a lot of the other male characters, in that professionally he doesn't view Peggy as different from the guys (at least, not since she made him get naked in season four to stop him making cracks about her body), but is still condescending in a way he probably doesn't even notice. She has this debate with Stan because he's arguably one of the good guys, and even he can't see the double standard of women not being allowed to make the same mistakes as men.

Critics often describe Peggy as a feminist but I wonder if this is strictly accurate. She is a feminist icon, certainly, and her character inspires debate on the issue, but overt declarations of feminist thinking like this are rare for her, just as scenes so direct as this are rare for Mad Men. I think of her more as a cipher for feminism through the issues she encounters than as a person who is a feminist.

Maybe these aren't so far from the same thing, but it always seemed to me that Matthew Weiner deliberately shied away from having a main character who professed to be a feminist. Everything is subtext (and it's in this where his having cut his teeth on The Sopranos is most evident); stating anything quite so baldly as Peggy does here is not the usual MO. But then the group of young douches from McCann with whom she and Joan had to deal back in Severance were a bit on-the-nose too. Maybe as we head towards the finish line, the real points of Mad Men are being flagged up for us so we don't miss them before it's too late. I hope not; I feel more clever when I figure it out, or more likely wholly misinterpret it, for myself, and if watching high-end television isn't about stroking one's own ego then I'm not sure what other purpose it serves. 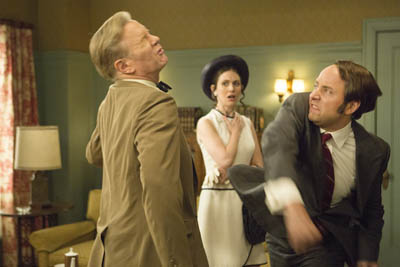 "The king ordered it!"


There was an unusual vulnerability to Pete Campbell this week too. He decks a school principal who clings to a centuries-old battle between their Scottish ancestors (which sounded oddly like The Red Wedding), proves his real worth by landing Secor Laxatives for the ultimately pointless Stirling Cooper West splinter cell, and tells Peggy in advance about the McCann absorption out of what seems like altruism. "Are you going?" she asks. "I have to," he says. "I've never worked anywhere else." For all his bluster, he's the 21-year-old you sit next to at work. They're in their first job, but they reckon they should be running the place because they've got 350 LinkedIn connections.

For now, after Don was interrupted in the middle of his pitch for Sterling Cooper West - a wonderful rug-pull that upended our expectations of another Carousel - we know this is the big ending. Everything changes. And in three weeks' time, here's the final scene. Flash forward to 1981: a mulleted Don Draper sits down at his massive IBM PC, and in green text on the black screen, types "Coke is it!" He saves it to a massive floppy disk, sits back and lights a cigarette. Fade to closing credits, over "Private Eyes" by Hall & Oates.