As I've said more than once before, and will repeat endlessly until someone tells me how clever I am, Mad Men has chronicled the decade in which ideas first became commodities. Its ending demonstrates how the sixties were an age in which everyone had ideas all the time – Let's open a gallery in this old shed! Let's move to San Francisco and paint wooden eggs! – and how people gradually filtered out all this noise and made sense of it all.


Only now the whole thing is over have I allowed myself to read the D.B. Cooper theory put forward in 2013 about Mad Men's ending, and I love it. It fits perfectly. Even as recently as last week, the use of a Buddy Holly song over the closing credits was suggesting something along the lines of a plane crash.

But it – or the foreshadowed final leap from the skyscraper, or anything ending in Don's death, really – would have ignored that this was an ensemble piece, and that we needed an end not just to Don, or even to each character, but to the decade. As if the Beatles breaking up wasn't a bookend big enough.

We find Don in Utah, driving a fast car, sweaty as hell, oblivious. On the phone to Sally, he gets the news of Betty's cancer, and later calls her. There's a lot going on in their conversation: the first tears he's cried since Anna Draper died; the glimmer of some residual love still between them; the fact that, just like Henry, he doesn't ask how she is but focuses on what the practical arrangements are to be. "I want to keep things as normal as possible," is the line that floors him, because he deserves it, "and you not being here is part of that." 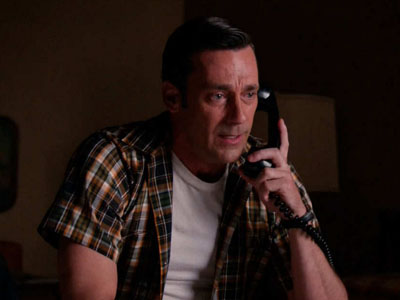 There's a sort of narrative shorthand that says a male hero should man up and go home for his kids at this point, despite the woman's insistence that he doesn't, because what she really wants is for him to take charge and sort it all out. But Don is not a hero; he only looks like one. And give him his due: he takes on board her wishes because he wants to give her this one last act of respect. And an epic solo drinking session later, he's off to California and Stephanie, the only family he's allowed to see. She's had to give up her son because of her drinking, we infer, but as she points out, Don's the one who's in trouble. "A lot has happened," he concedes. She drags him off to a hippy retreat up the coast.

There are endings for everyone: Roger gets one last shot with a woman who actually challenges him; Pete somehow moves happily to Wichita with Trudy and their daughter, neatly swerving the online speculation they'd end up in the Wichita State University football team plane crash (which wouldn't have made a lot of sense anyway). There is a refreshing lack of inclination to resolve the fact that Pete and Peggy have a son somewhere, and are resigned to never seeing him. In a lesser show this would've hung over all seven seasons and demanded a final emotional showdown of some kind, but, as Don predicted, "It will shock you how much it never happened." Their final goodbye is friendly, almost formal, and doesn't allude to it. Joan too ends up on her feet because she's come to terms with having got there on her back, Herb Rennet a distant memory now she has real independence.

Though I almost cried actual tears at Peggy and Stan's ending, and Elisabeth Moss's turn during their phone call was some of the best acting you're likely to see, I thought just finding the right man sold her a bit short. The sight of she and Joan forming their Cagney and Lacey production outfit would've satisfied a bit more. A finale is just one episode of many and too much significance is generally accorded them, but the way a show ends does hint at a long-term resolution for the characters; it suggests that how we leave them is how they will go on to live.

In Peggy's case, "Person to Person" gives the impression that Stan was all she was ever looking for. Certainly there was a need for her to realise, as he tells her, that "there's more to life than work", but she's been about much more than that. Still, Pete was right: she'll be a creative director by 1980, and maybe we know her talents well enough now to know that without being shown. 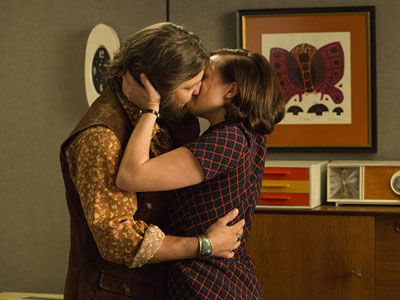 You look at how the characters have ended up, and we haven't been presented with some pack of ciphers for the sixties. Everyone got rich off the counterculture without really experiencing it, by exploiting it for ads. These were dangerous times: on the other side there were casualties, remember. Christ knows what kind of life Kinsey goes on to have. The last we saw of Ginsberg he was being carried out of the office on a gurney, raving mad. Margaret Sterling is "lost", Roger says, presumably having abandoned her child to live in a commune. But those who only dipped their toes in the water did just fine.

Don avoided the whole thing, affecting to think it horseshit, but more probably was scared of its threat to the self-control that kept his mask up. He rejected the beatniks, the backstage Stones fans, the acid-heads. He didn't mine hippy culture for ideas in quite the same way, not because he was uncynical but because he had no sense of self. His ads were like they were written by a wonderfully talented ghost, preoccupied with a nuclear family life he could've had but constantly sabotaged, and sometimes with the sort of escape he's just pulled (remember the Royal Hawaiian Hotel ad, a discarded suit on the beach, left by a man who's shed his "skin" and walked into the sea). There was never a person behind the creativity; just a shell.

At the coastal retreat he finally finds the person who exists between Dick and Don. Stephanie takes off after she's judged for abandoning her son, and Don has no way to leave. He calls Peggy, to say goodbye, because she's the only person left that he trusts. ("I can't get out of here," he tells her, and it's not the retreat he's talking about.) Dragged to a self-help seminar where everyone shares their feelings about how shitty their lives turned out, he's a hollow man, barely able to focus, until Leonard starts talking.

Leonard, a nondescript man you had to look up on IMDb to remember he played an ineffectual Santos aide in The West Wing, shares how no one misses him when he's gone, which makes Don look up. People do miss him. Peggy just told him so. "You spend your whole life thinking you're not getting it; people aren't giving it to you," Leonard says. "Then you realise they're trying, and you don't even know what 'it' is." And when he breaks down, Don goes over to hug him, and finally he's engaged with some of the ethos of the sixties, the cultural change that was going on all around him, and he understands basic ideas, like sharing, empathy, compassion. 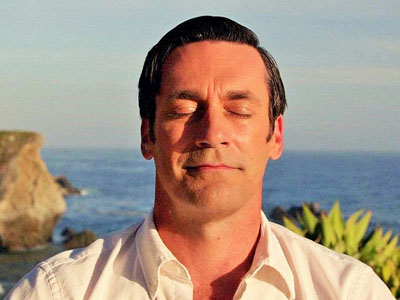 After a little montage doling out personal denouements, we see Don on a hilltop meditating, his eyes closed, with a smile of satisfaction, and we find out he finally took something human, something from his personal experience, and put it into an advert: the Coca-Cola hilltop spot, "I'd Like to Buy the World a Coke". And he could do this because for the first time there was a person behind his creativity, not a facsimile of one. (I think it would be remiss to ignore the fact that I predicted three weeks ago the final scene would be him writing one of the famous Coke slogans, and I was definitely being serious so it definitely counts.)

When that smile crosses his face it's because he's just had the big idea. And it's the first real one he's ever had.