Plotting a graph on the effectiveness of 2013's villainous names

The year in movies has been a let-down in more ways than one so far, but the biggest disappointment is the quality of the names of 2013's villains. Whatever happened to good old-fashioned evil names like Vorgon The Destroyer or Sir Killalot? Nowadays, movie villains have names like Keith and Chris and Alan. What the hell is happening?


The lack of truly evil names first occurred to me in April this year, when we all got acquainted to talking about Iron Man 3 baddie 'The Mandarin' like he was a truly epic foe, and not, say, a small citrus fruit. Tony Stark should be afraid of The Mandarin no more than he would be villains named 'The Cantaloupe' or 'Ya Pear'.

At least The Mandarin sounded a little exotic. The villain in Star Trek Into Darkness - that's a sci-fi that stretches to the far ends of the universe, featuring kaleidoscopic languages that would twist the tongue - was called 'John Harrison'. Here are some other names JJ Abrams rejected. Chris Jenkins. Steven Edwards. Pete Fowler. Alan Fordham. The universe trembles before Colin Cresswell. Kneel before Phil Cooper. You dare incur the wrath of the mighty Pat? And so on.

Underwhelming villain names is a trend that has continued throughout 2013, without so much as a 'the Wicked' or 'from the Planet Zyrax' suffix in sight. That is, until I saw Kick-Ass 2, which features a villain so outrageously named he makes General Zod sound like General Bod. With this new high benchmark to compare to 2013's low points, I plotted a graph of this year's movie villains and how much terror their names are likely to instil in the hearts of their enemies. If any. 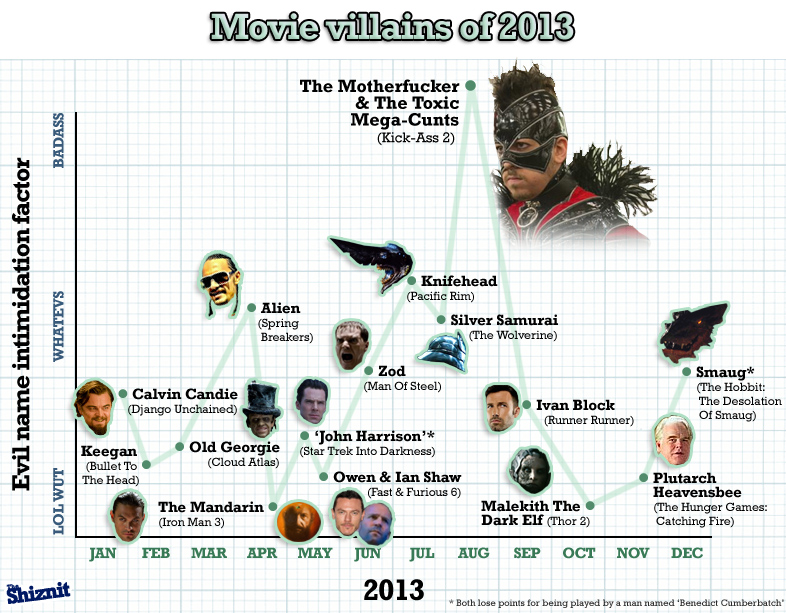 More:  Kick-Ass 2  Kick-Ass  Christopher Mintz-Plasse  Mark Millar  Silly Names  Villains
Follow us on Twitter @The_Shiznit for more fun features, film reviews and occasional commentary on what the best type of crisps are.
We are using Patreon to cover our hosting fees. So please consider chucking a few digital pennies our way by clicking on this link. Thanks!