I feel about Christmas the same way John Oliver feels about New Year: both are like the death of a pet - you know it's coming, but nothing can quite prepare you for how awful it is. The same can be said for the latter stages of The Apprentice.

Looking like a corporate Krampus, Lord Sugar arrives early in the morning, demanding to be let into the house. He's there to let the candidates know they'll be making Christmas chocolates, and for some reason he has to tell them whilst they're in the pyjamas. He's mixing up the teams again, which means putting Sabrina with the two people who hate her the most, Sian and Khadija.

Neither of them seem keen to let her be PM, but they also don't want that poisoned chalice themselves so just decide that "they'll all be PM" this week. Because of course, which thriving companies don't have three CEOs? Where would we be without our Queens of England, or Catholicism without the Popes? On the other team Camilla, who we know is a nut enthusiast, is a chocolate enthusiast as well as a doughnut enthusiast so she's Team Leader ahead of Sarah-Ann and Daniel.

Camilla wants to create a luxury chocolate brand, so opts for a porno-chocolate theme. She dismisses Daniel's ideas for XXXMas and Randy Rudolph in favour of Santa's Choco Seduction, just like baby Jesus wanted. The end result, adorned with a sexy clipart Santa, looks like the kind of chocolate you can buy in Ann Summers that always tastes weird. Don't pretend you don't know what I'm talking about. 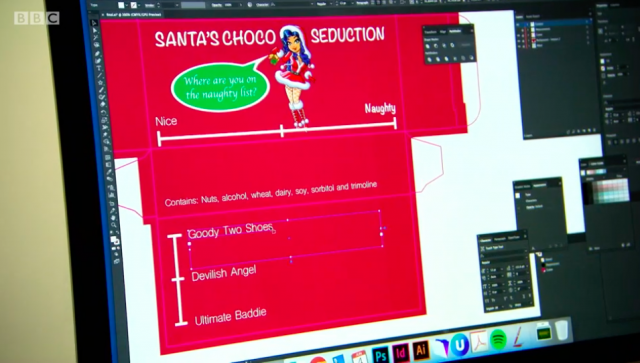 
In the testing kitchen, Sarah-Ann immediately gets stuck into deciding the flavours, and by "deciding the flavours" I mean necking all the booze they're going to put into the chocolates. The expert on hand advises one drop of rum to start with, so she puts in three and cleanses her palate in between tastes with the apple cider. She is put on the back foot when Karren has to step out of the shadows and ask why she didn't take down any measurements for the manufacturing. Sarah-Ann responds by telling Karren she's her bessht friend, yes she is and they should totally open up that bar in Ibiza together, but first lets go and get a kebab.

Khadija throws herself into her tasting with similar gusto, determined to get the most festive flavours possible for Collaborative's ganaches. Sabrina is quite clear that she wants two safe flavours, and then one "out there" for her and Sian's brand Remoir Chocolat, a made-up French word to make it sound all classy, like. Chucking in some cranberries and I don't know, tinsel? she also puts in chestnut, because "What's classier than a chestnut? I don't know" she ponders to camera.

The packaging for Remoir Chocolat is distinctly uninspiring, and Sabrina isn't impressed with Khadija's chocs, saying that they're not classy enough. Did she not taste the chestnut? There's not much time to waste though, because they all have to go to the London Dungeon for acting lessons whilst Camilla and Daniel are going to Elf School because ... I don't know, the producers obviously don't give a fuck anymore.

In a bid to further convey this feeling of luxury, both teams raid the BBC's prop store for tacky Christmas costumes for the pitches, and Typhoon go one step further by throwing in an Elf Dance, because we all remember when Steve Jobs did a little shimmy every time he launched a new product: it never fails. 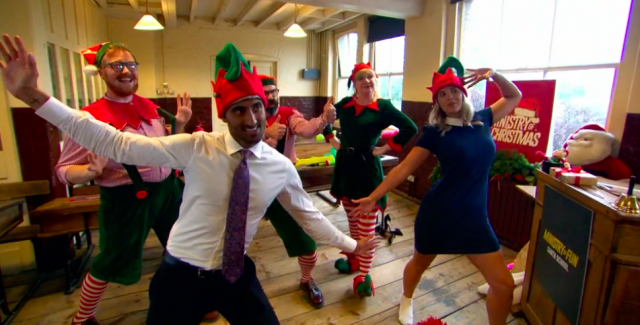 "That can't be good for your elf"


The pitches themselves are a proper sleigh crash. Everyone is mortified by the Elf Dance, and no one can taste the booze in Santa's Choco Seduction because Sarah-Ann drank it all. Collaborative fare slightly better, on account of the fact Khadija and Sian have managed not to belittle Sabrina in front of everyone. But Sian manages to perfectly encapsulate the futility of all of these tasks when she has to pull a number out of the air when asked what her marketing budget will be. What's the difference between pretending you've got 50 grand to spunk on a campaign for a product you had to come up with that morning, and a major supermarket pretending you're going to order 7000 boxes for a concept that was developed in less time than it takes to brew a cup of tea?

Collaborative win the task after the Co-op go for the classy chestnut chocolates, leaving Camilla, Daniel and Sarah-Ann to face a firing.
Who got fired?

Considering Sugar was quick to justify his slightly-demeaning appraisal of Sabrina as "young lady", he's not too enamoured with Typhoon's naughty Mrs Claus, feeling it's less sex-y and more sex-ist.

Despite being delighted with them at the time, Camilla tries to distance herself from Daniel's ideas for the product and simultaneously blame Sarah-Ann for being a total lush. Which is just as well, because it's Sarah-Ann who is sent packing.
Does she thank him?

No! She just smiles and leaves without so much as a by-your-leave.

Next week: the candidates must discover why dermatologists hate this local mum so much.