It's drawing to its close and we're all better people: informed, educated and entertained. Let's build on this experience and learn to live together in harmony, then burn the world in a big skip.

The final episode is always the most disingenuous. The pretence throughout the series that this isn't just an excuse to put big egos together in a room and make them argue is thrown out of the window, and all of a sudden everyone works together relatively normally: taking instructions on board and carrying them out, working in the interests of the team rather than just their own, and so on. The implication is that this is how you work when something's tangibly at stake, so why not just do this every week? Or keep it the same but only televise the final? Or televise none of it?

Anyway they're on a roof and they've got to do ads and a pitch for their big idea and pick some returning idiots to help them. As always, part of this involves choosing a name for the business. A name for the business that, in Sian's case, she's been running for three years, presumably trading under the name "Generic Swimwear Brand [name tbc]" and using the URL "_____.co.uk" for the online store. The concept of pretending to agonise over the name in a brainstorming session as if you've never previously devoted a second's thought to it is daft enough, even before you factor in that the winner will have to change their existing business name, stationery and branding, redirect their website and risk significant harm to whatever SEO they've built up.

There is a narrative afoot to rehabilitate Kurran, returning as one of the helpers. Sian initially chooses him as subteam leader, before reversing this decision and going with Jasmine instead. Given that she has met him, there's no way on earth she genuinely entertained this idea, so it's been staged to remind us what a pillock he is, in order to set up his redemption later on.

And there's the usual Chekhov's Gun, not quite flagged up with a big red arrow on the screen but it might as well be: Sian stresses in her kickoff meeting that in the social media ad she wants the swimsuit model's hair to be wet. This is such a specific instruction you know as soon as it leaves her mouth that the only reason we're hearing it is because it will later be ignored. Similar but less overt is Camilla's desire to have her campaign cheeky, but not too cheeky, after the interviews flagged up that her existing branding was basically just a load of Pornhub screengrabs. 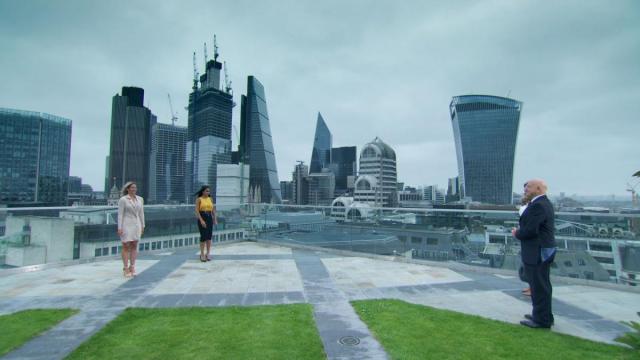 It's windy up there. Surely no one can hear each other?


Sian and Khadija's blue-sky session eventually yields the brand name SYO swimwear (style your own, though the customer is not in fact afforded this opportunity: like the Build-a-Bear Workshop absent the function to actually build a bear), and a Hand of Fatima logo, a symbol of female empowerment. Sabrina, of course, must actually dress up in one of the swimsuits, because she's a woman on The Apprentice, and what are they going to do, get a professional model in?

Camilla's nut milk is branded "MLK IT" in a canny brand tie-in to ensure strong sales on Martin Luther King Day in America. Tom, expected to play the part of "man excited about a thing" on the social media gif (mental note: bet Sugar pronounces it "jif" later), is less than convincing in the role, so Kayode has a go and predictably does a much better job, so Camilla chooses his version. They'd added the hashtag #wipeyournuts to it, but she's not keen re the aforementioned cheek surplus, so she decides to get rid of it. You can now change things after they've been made, apparently, whereas in every other episode the project manager sees and hates the advert that's been made with disregard for their instructions, but is powerless to ring up the agency and request a tweak that would take ten minutes.

Her TV ad is an odd mish-mash of themes: a boxing gym, a pile of nuts and a glass of milk, with some fairly strained acting from Jackie, Tom and Kayode, and it pales into comparison with Sian's swimwear ad, directed by Kurran. Here's where the final episode love-in reaches its peak: he acts like a bell-end while directing Sabrina and Jasmine in swimsuits on a boat, and waves away their concerns that they're overrunning, but the final product is pretty good, and what d'you know, they've edited it in a way that sends the message: arrogance gets results. He does a to-camera bit about how the great directors like Scorsese and Tarantino will always stick to their guns when they have a vision, and he's right about it too. It's confusing, like when the T-800 came back to protect Sarah Connor.

Some marketing feedback from the public, secured at a juncture in the process at which it's impossible to act on it, gleans the comment that the nut milk packaging is "a little bit cowy", then it's off to do the pitches at City Hall. Sugar's in his brown suit, sitting down and saying grimly: "Let's get on with it then", as if inconvenienced; for all the world a man about to give blood.

Camilla's pitch is good and fairly rich with nut puns, but Sian's is better, and her responses to a skeptical swimwear designer's questions are great: confident but respectful. The experts have obviously been fed questions in line with the episode's narrative threads: the cow-style packaging, etc. What's in it for them other than a day out of the office I can never understand.

There's some Sugary jibes at Kurran: "Are you rehearsing for panto?" and so on. Everyone's very friendly and in a good mood. They all laugh too hard at his "taking the pistachio" line, and he even pronounces it "gif". Perhaps I've been too hard on him. I don't want a poorly-punctuated tweet off him telling me to shut my facehole. Who am I kidding: that's exactly what I want.

He thanks the others for their contributions and tells them they should feel free to contact him in future. God, I hope Kayode bombards him with multiple enthusiastic Whatsapps every time he gets an idea until he gets blocked.

Sian knows her business inside out and argues her case for mass-production well as her would-be benefactor expresses concern that her business is too small. He fired Jackie because her business was too big, keen advocate of the Japanese "Three Bears" lean business model that he is.
Who gets hired?

They argue a bit because they have to, then there's a bit of perfunctory to-and-fro before he rightly anoints Sian. The end is always an anticlimax because of the lack of any sort of award or ceremony: she just does her prerecorded taxi victory speech and then it finishes. It's like when you completed a game on the Spectrum and it gave you a little firework display.

Well done to her. Here's to a long-lasting business relationship, working together in perfect synergy. 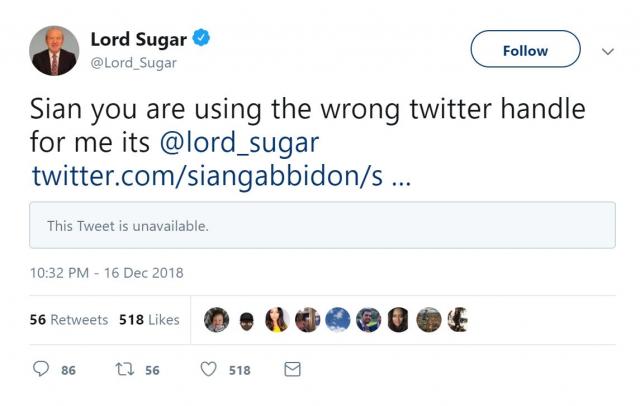