Scream If You Want To Stop

Nothing good ever happens at theme parks. The last time I went to Thorpe Park was on a corporate away day, when instead of going on any rides, we were forced into groups and do a painful team-building exercise around the park. In a rather unsettling act of fate, it was the same day that there was the horrific accident at Alton Towers on the Smiler ride. During the debriefing session, the head of HR stood on the stage and made a pretty off-colour joke, as we were trying to present how the treasure hunt aligned with the company’s business principles, which was trying not to acknowledge the fact that two of the (married) managers were clearly trying to get off with each other. This has nothing to do with this week’s recap, much in the same way that The Apprentice has very little to do with business.

In what was apparently “their hardest task yet”, the contestants had to play Rollercoaster Tycoon and design a new theme park ride, except without any budget constraints or thoughts about safety. The show has hardened me now so much that unless actual human lives are at stake, I’m not interested. 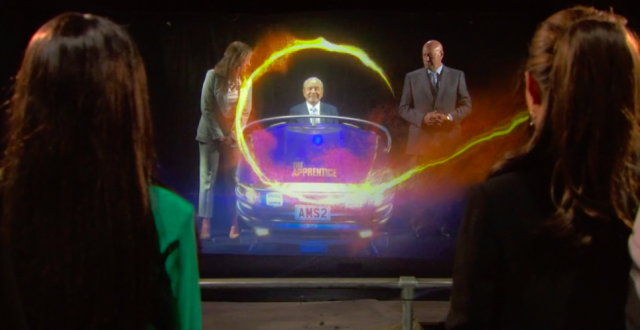 "I must go, my planet needs me"

Which team is which has been completely forgotten. Tom wants to be PM, but memories of Tommy the Turtle (“He’s not just a turtle, he’s also a friend”) are fresh in people’s minds, and he loses out to Scarlett. To really stick a finger in the wound, Scarlett then appoints Lottie as sub-team manager, ignoring his pleas that he’s got a really good idea this time, honest guv’nor. This entire scene is played out on stationary dodgems, so Tom might have a claim for funfair dismissal.

Strapped into another ride on the other side of the park, Carina’s idea was deeply evocative: in a bid to eject themselves from the hellscape that is The Apprentice, she pitched a scenario where the rider is pulled backwards from a dream into a nightmare. Which isn't too bad, so lets see how Ryan-Mark and Lewis, a man about as exciting as a Boots Meal Deal, manage to fuck it up.

In the name of research, the teams get to go on all the rides, so they’ve one up on me there. It’s hilarious. Tom has ride barefoot (because where he’s going, he doesn’t need shoes?) and Ryan-Mark has a meltdown on Saw in a scene only secondary to the scouts from Jim’ll Fix It.

Fired up on candlyfloss and those massive drink containers with the straw, Tom comes back with an idea to save the world on a rollercoaster. The team humour him, but I’m not sure whether it’s because they think it’s a good idea, or they simply want to hand him enough rope to hang himself with. Scarlett wants the ride to have the most loops of any roller coaster in the world, landing on 15 which is approximately 13 more than would make the average person violently puke. The sub team then develop a convoluted back story about gravity going missing, which then means Tom has to pour himself into a skintight silver jumpsuit for the poster and the pitch. 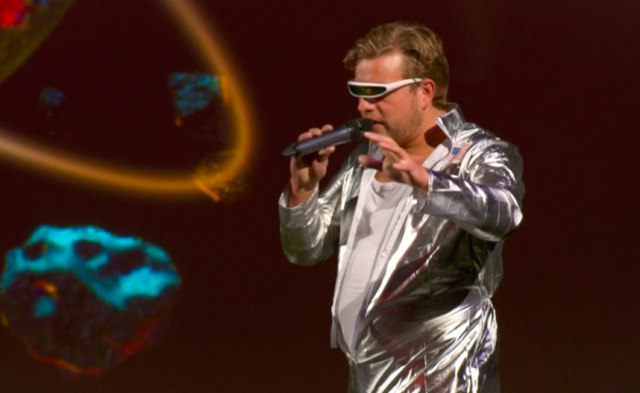 "I'm a Rocketman, you slag"

Corina and her crew’s rollercoaster looks a bit lame, and is only livened up by Lewis (or is it Dean?) and Ryan-Mark’s poster which fully strays into the surreal. Naming the ride Insomnia (don’t you have to be asleep to have a nightmare?), Ryan-Mark creates a logo of an eyeball, insisting that the pupil is in the shape of a capital serif I, when a sans serif I would have still worked #fonttalk. He then superimposes a hand over the top and makes it green, making it look like an alien. “It looks like an alien”, says the public, the experts and everyone else on his team. He suggests that they “need to deflect from the alien concept”, which instead of changing the logo means that instead, he just tells people it can be whatever you want it to be.

Tom, Lottie and Pamela’s Final Loop and space theme fails to win over the experts, who point out that yes, in all probability you probably would vomit after that many loops, meaning that Corina’s waking nightmare with the nonsensical alien poster is the winner.

It's a bit on the nose, but I'll allow it

There’s sniping. Lots of sniping. Lottie and Tom go head to head in a battle of “Can I Talk? Let Me Finish”, and no one wants to be held responsible. Scarlett is unable to pick who would come back with her, Lord Sugar decides that Lottie, Iasha and Dean should all be in the firing line.
Who got fired?

If proof be needed that The Apprentice is about personalities rather than business, Sugar fires Iasha for saying nothing during the task, despite the fact that it was her team who landed a record-breaking amount of sales in the bike task. Or was it because of another reason? *Sideways glare to camera 2*
Did she thank him?

No, probably because she wanted to tell him where he could stick his £1.2 million.

Next week, the candidates have to make jam or something.