I'd have been cool if I lived in Berlin in the Cold War. You would've been too: we would've smoked constantly and worn elegantly distressed charity-shop peacoats and listened to Bowie in a Lada. Maybe we could've been happy there, you and me.


I mean, living in fear of arrest and Zersetzung by the Stasi would've put a bit of a crimp on it, but still. It's an odd cultural period, seen now as a totem of effortless, arty cool but achieved under one of the most oppressive regimes in history. Atomic Blonde addresses both, frontloading the style while not shying away from the horrors.

Suddenly all up in Berlin's grill after a quick bit of interview-room flashback framing is Lorraine Broughton, an MI6 agent here to recover a stolen microfilm containing the names of all the West's agents in the Soviet Union, the sort of thing you suspect they might've been better off just not putting on a microfilm in the first place. James McAvoy's rogueish drunk agent Percival is her contact, and no one's who they say they are; or are they, or are they, and so on. 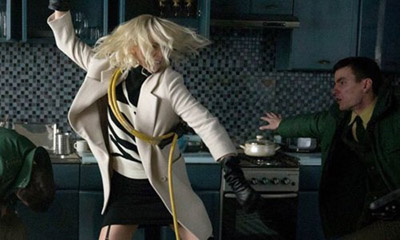 An inappropriate time for a Stayin' Alive dance-off, but damnit if she doesn't style it out.


On the whole, stories about spy-play and counterplay tie me up in knots, but luckily we're mainly here to see people get kicked in the face in well-choreographed ways, which is fine by me. Charlize Theron, playing the usual taciturn army-of-one with a robotic glare and a singular purpose, beats merry shit out of anyone idiot enough to get in her way, and mugs off John Goodman and Toby Jones in the interview room whenever we revisit the flashback device. She is convincingly relentless and hard, apt at conveying the quick-study sizing up of assailants, and brilliant at smoking.

The Berlin chic never drops even amidst two of the most brutally long and well-staged fight scenes you've seen in a while. The first is set, wonderfully, to a diegetic soundtrack of George Michael's Father Figure, and features innovations like the wrenching back of one guy by the neck to make him kick another in the chops. The second spans a few floors, is edited to look like a single take, and involves enough bloody pummelling that she and her opponent spend the final portion of it struggling to stand up. There is never the sense that she is walking away unscathed, the scars staying on her face for the rest of the proceedings and she visibly damaged; it's consequential violence, not just a cool fight to enjoy before we move on.

McAvoy is a bit more of a sticking point, doing a good enough line but in a shtick we've seen before: elegantly dishevelled, thrift-store-clothed and hedonistic. Like his Filth turn without the nihilism, he exudes the irascible private-school confidence of the British agent abroad in a country where he can do what he likes, but he's trying a bit too hard to be That Guy. Lorraine even calls Percival on it: "I don't buy this hungover act." The story needs a loose cannon she has to keep tying down to the deck, but maybe one that rolls around a little less. 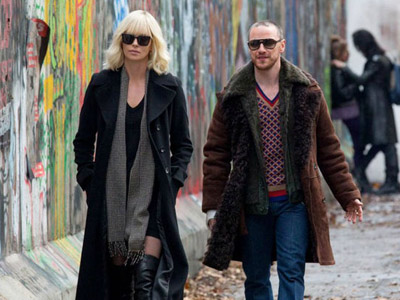 Berlin in the eighties: the sun never shone once, but you wore shades anyway.


Having left the John Wick sequel to come aboard, David Leitch has arrived at similarly obvious franchise material here. These lone-hardnut pieces are a modern American cinema staple resurrected from the eighties: they don't need a character tied to any particular law enforcement agency, just some sort of legitimacy for the violence (like a murdered dog to avenge) and an arena in which it can plausibly take place without everyone immediately getting arrested. They operate on a defiantly libertarian ideal – don't rely on anybody, sort it all out yourself – and so a return to the eighties, when this sort of American thinking really set in, makes perfect sense. And if you're beating up a bunch of Communists then so much the better.

Once all this is set up, they live and die by the creativity of their fighting and shooting. These are two things you would've thought had no more possible creative angles to exploit, but with a lot of choreography and a surface sheen of Berlin cool rinsed through the whole caper, there's plenty.

More:  Atomic Blonde  David Leitch  Charlize Theron  James McAvoy  Eddie Marsan  John Goodman  Toby Jones
Follow us on Twitter @The_Shiznit for more fun features, film reviews and occasional commentary on what the best type of crisps are.
We are using Patreon to cover our hosting fees. So please consider chucking a few digital pennies our way by clicking on this link. Thanks!