One of the many wonderful things about living on the same planet as Zac Efron is that he knows when and how to take his shirt off. It is a rare talent to look like he does with his abs out, accept that directors are going to want him to get his top off at least twice a film, and then to do so with enough of a sense of self-mockery that you don't think he's an absolute bell-end. Self-awareness is what got him and his co-star The Rock where they are today, and so a riff on Baywatch, sending up how daft it was, feels like just the ticket. So why isn't it sillier?

Because it needs to be much sillier. The point is, Baywatch was a ridiculous show about boobs, and any movie version released now needs to realise that everyone who remembers it does so with a fond sense of irony. If Seth Gordon's film didn't realise this and played it straight, that'd be one thing. But it does realise this, and just fails to deliver on it. 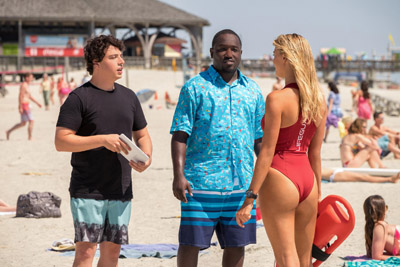 
There are big gaps where jokes are supposed to be. It has a good idea for a running gag, for example, which sends up the show's central requirement for you to suspend disbelief: the fact that the lifeguards come up against actual criminals, like drug smugglers and murderers, and attempt to solve these crimes despite having no jurisdiction to do so. Efron's Matt Brody, the new recruit, constantly asks why they aren't just calling the police, and Yahya Abdul-Mateen II's Sergeant Ellerbee, an actual cop, keeps reminding them that when they chase criminals they're just "some guys chasing some guys". It's the closest thing to a successful motif the film has, so why is it used only as a jump-start for the odd bit of riffing, then tossed away as soon as some more boobs show up?

Ah, the boobs. Baywatch wants to have its boobs and eat them. Brody takes a liking to Summer (Alexandra Daddario) and she recognises him for what he is: a pre-redemption movie douche, full of himself and in the habit of talking to her chest. But of course she knows she's going to get with him eventually, so essentially we're rewarding a douche for learning not to be such a douche. I mean, we're talking about decades of comedy cinema here so it's unfair to single out Baywatch, but here women are a trophy reward for men prepared to start behaving like anyone well-adjusted should: help out others and embrace team spirit rather than act selfishly; look outward rather than in.

Summer and CJ (Kelly Rohrbach) are smart and capable lifeguards but seemingly uncomplaining about the outfits they're made to wear, even though it's an active practical hindrance to the jobs they take seriously. This is sort of it, you know: preening and self-regard are the traits they recognise as having to be ironed out of Brody by dint of his taking lifeguarding seriously, but they're all at it, as is the film. It wants you to believe it's ribbing the original property but it's really just being it, like someone complaining all evening that the club is shit, and dancing ironically when really they want to let loose because secretly they're having a great time. 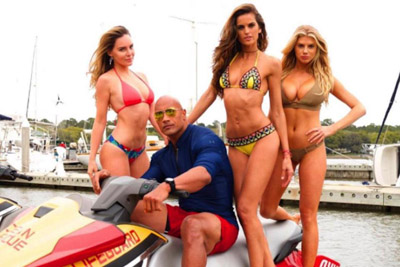 It has just occurred to me that I am really not anything at all like The Rock.


The exception to all this is The Rock, who in Hasselhoff's Mitch Buchannon role is the only desexualised character, a mentor and friend to everyone. He and Efron hit it off nicely, and there's a lovely absence of bite to him just like you perceive in the man himself; he encourages out-of-shape Ronnie (Jon Bass) along on the lifeguard trials without snark and lets him on the team because he never gives up, even though he's only there to impress CJ.

Reboots can be done better than this. Most are pretty good these days; old properties like Vacation have been dusted off and afforded care and attention. But the template for the send-up reboot is 21 Jump Street, and that's where Baywatch should've gone: embrace the thing that makes rebooting it worthwhile, namely the fact that the original was funny because it took itself too seriously, and really go to town on it. Fine, OK, keep the boobs if you really must.