Online discourse being what it is, the announcement of a reboot or remake is usually greeted with dread and resentment. It's sacrilege. Why can't they just leave it alone? How can a woman possibly carry a proton pack? But this ignores the recent evidence that Hollywood has now got the cheat codes for 'repurposing'. Jurassic World, Godzilla, The Equalizer: respect the original property but make something of its own hue. You have nothing to fear from reboots except a Kevin James Uncle Buck, so make your way with confidence to see Vacation.


If anything, I find new takes on old titles are interesting studies in how the genre has shifted over the years. In the case of Vacation, we get the original family farce with an added dash of the new subgenres that have sprung up since the eighties: gross-out and cringe comedy. And a lot of laughs too.


Rusty Griswold (Ed Helms), Clark's son in the National Lampoon originals, is now approaching middle age, a married father of two and a local flight pilot for a budget airline. His elder son James is the sensitive type, bullied by his little brother Kevin (Steele Stebbins), a wonderfully foul-mouthed little bastard. (James is played by a boy called Skyler Gisondo, by any objective measure a girl's name, so you imagine this treatment is not unfamiliar to him.) On learning that his wife Debbie (Christina Applegate) and the kids are bored of the annual trip to a cabin in Michigan, Rusty hatches a plan: a cross-country drive to Walley World in California, his father's destination in 1983.

There's a pleasing continuity to the choice to use the grown-up Rusty rather than erasing the old family. There's a Boyhood-style satisfaction in working out that Helms is about the right age to be playing the character 32 years on (he's six years younger than Anthony Michael Hall), and it makes implicit sense of the fact that everything soon goes wrong, as if the Griswolds are somehow hereditarily predisposed to experience chaos. Rusty has inherited Clark's perseverance, and won't stop until they reach Walley World, no matter how much the holiday is already irreparably ruined.

Within this you can do whatever you want, and that's where the reboot idea makes sense. There are a couple of knowing steals from the original, but everything else is fresh. They detour to Debbie's alma mater in Memphis, which delivers a hilarious non-sequitured list of her college misdeeds from a gang of sorority girls. At a motel James gets sweet on a girl his age, till Rusty spoils it for him by acting like a paedophile. The hot springs they visit in Arkansas aren't as pure as they were hoping for, and they're forced to stop off in Texas, where Rusty's sister Audrey (Leslie Mann) now lives with her husband Stone, played by Chris Hemsworth. 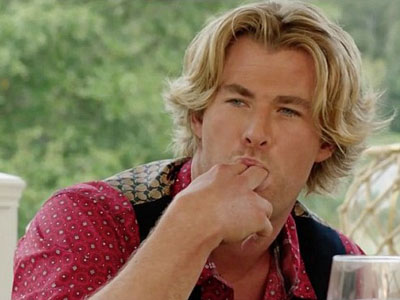 "Mmmm, my own finger is DELICIOUS."


You've seen his especially viral-friendly scene in the trailer, no doubt (avoid it if not: it spoils a few good punchlines), but there's less base pleasure in the unexplained down-home Texan simile Stone insists on repeating, and in particular a brutal sight gag that hastens the Griswolds' departure from his ranch. When you're a handsome male star who trades on it, there's a lot of currency in roles like these that show you don't take yourself too seriously. Ironically, playing a great-looking douche is a good way to convince the public you're not a great-looking douche - though accepting the role does confer that you know you're great-looking, which is a little douchey. Whatever, I'm not jealous.

By the time the family finally rediscover the closeness Rusty wants by learning to embrace their dysfunction, we've gone through slapstick, some Andy Bernardesque oblivious embarrassment and some scatalogical gross-out, and hardly any of it has missed the mark. If you've sat through it and you're still complaining it's a lazy retread, then I don't know what to do with you. Yes, we're living through a cycle where nervous studios play safe and focus on existing properties, and not all of them turn out great, but it seems to me that the majority are well handled, canny and made with pride. Maybe if you didn't click links to Buzzfeed lists of Things You'll Only Understand if You Grew Up in the Eighties quite so much, they wouldn't have you pegged as a sucker for nostalgia.