Everybody looks likes someone or something else in Criminal: Ryan Reynolds looks like a worried owl, Tommy Lee Jones looks like Maz Kanata and Kevin Costner is trying his best to channel Nicolas Cage. Even the film itself is trying to be a Bourne-style thriller, but instead is a weird mishmash of Self/Less and that episode of The Simpsons when Homer has a crayon stuck up his nose.


Criminal is the perfect example of a plot being so bonkers it could almost work. Clearly the likes of Costner et al thought so, although don’t go looking for Ryan on the poster; thanks to a little film called Deadpool, he’s too good now for the likes of films which are probably better off going straight to VOD.

On paper, it should work in that it’s-so-bad-it’s-good-way, like say, London Has Fallen or anything starring Keanu Reeves. A rather sad looking Reynolds is saintly family man and CIA Agent Bill Pope, who gets his teeth electrocuted by a 'Spanish anarchist' before he can complete his mission. The only option left for Gary Oldman’s bellowing CIA chief is to transplant Pope’s memories into the sociopathic criminal mind of Kevin Costner, by way of Tommy Lee Jones playing a neurosurgeon.

Bonkers. And to a certain extent it does work, at times being both mildly thrilling and outlandish, but is never enough of one or the other to really stick. On the one hand, you’ve got fabulous action character names such as Quaker Wells (Oldman) and Jericho Stewart (Costner) and a brain switch plot that involves a man who doesn’t understand what feelings are; on the other, you’ve got the fact that it’s inexplicably set in London in glamorous locations such as Croydon and the SOAS Library, and no one actually plays a British character (save for a Piers Morgan cameo). 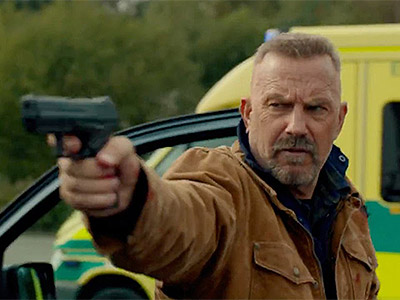 "WHO did you say was in this?"


One of the most exciting parts of Criminal I experienced was when I thought I saw the roof of my house in a crane shot. Seeing places you recognise can take you out of a film, and it’s not helped by dialogue such as "Take this chopper over the A111" and Ryan Reynolds in the back of a taxi asking to be taken to Deptford. It just doesn’t feel right.

Criminal’s main problem is everything is a little too on the nose, but it takes itself so seriously that any humour feels misplaced, if it’s even meant to be funny at all. Costner grunting in an East London kebab shop before exploding into violence and stealing his victim’s hat, exclaiming "My head was cold", is obviously meant to be a stab at comedy. But a violent outburst in a bakery a short while after ("Who punches a man in a patisserie?") comes across as laughable for the wrong reasons. As does Michael Pitt's "schmoke and a pancake" accent for a sweaty Dutch hacker, who’s called, get this – The Dutchman. Douglas Cook and David Weisberg’s screenplay sounds like it was cooked up by two high 15-year-olds, as even the most schoolboy jokes slip through (Pope’s debit card PIN is "6969"). 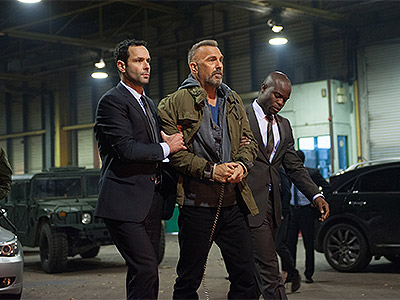 And you wouldn't believe what happens in the upside-down calculator scene.


Gal Gadot, who from now on we’re contractually obliged to prefix with 'Wonder Woman', does an admirable job as Ryan Reynolds' grieving wife who finds herself drawn to Jericho as he starts to display her husband’s personality traits, even though when they first meet he stops short of raping her because his continual headache after surgery allows him to experience actual feelings for the first time. But she’s given little else to do other than be the required kidnapped damsel that drives the plot along. It’s convenient that when Jericho starts to understand what love is, it happens to be with one of the most beautiful women on the planet. This would never happen on Themyscira.

The action is well-paced and it’s fun seeing Costner going full berserker, but Criminal could do with its own personality transplant and just decide what it wants to be. Just an inch more either way into seriousness or craziness may have given Reynolds something he would have put his name to.

More:  Criminal  Ariel Vromen  Kevin Costner  Ryan Reynolds  Gal Gadot
Follow us on Twitter @The_Shiznit for more fun features, film reviews and occasional commentary on what the best type of crisps are.
We are using Patreon to cover our hosting fees. So please consider chucking a few digital pennies our way by clicking on this link. Thanks!