You like to talk about tough superhero gigs. Thor was a tough gig. Mixing magic and mythology with grit and realism. Not easy. Guardians Of The Galaxy was a tough gig. Introducing an entirely new bunch of rogues unrelated to any existing properties. Tricky. Deadpool, however, is quite literally a tough gig: stepping up on stage to make with the laughs after being designated the 'funny' superhero movie. Like it's the one movie that has special dispensation to say what we all really think about superhero movies. That's a tough gig. What we ask of Deadpool is the movie equivalent of people who ask comedians to tell them a joke: a request to be funny on demand, on on our terms.


That's a lot to ask of a movie, but it's not the only thing being asked of it either. Deadpool lives or dies on its gags, but as well as making fun of the superhero genre, it also has to become part of it. To continue the comedian analogy, Deadpool is the 'edgy' stand-up hired to play the corporate gig: make the company laugh, but don't make the company mad. To its credit, Deadpool achieves the first part of that promise but underwhelms on its wider remit: it's certainly funny in places, but as a standalone superhero movie it sucks all the air out of the room.

Here's my pitch for a Deadpool movie, in one of those alternate universes you comic-book fans are so keen on, where creativity is not burdened with commerce. It's a one-time only deal with no scope for a sequel, because it's built from the ground-up to be a bridge-burner: a blast of both barrels to the face of superhero cinema. It skewers all the genre foibles we've come to tolerate; it laughs in the face of familiar tropes; it is genuinely subversive and anarchic and outrageous. 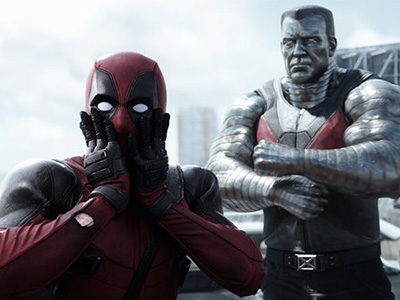 
Tim Miller's Deadpool doesn't exactly play it safe, but it does fall into line when the whip is cracked. It is an affectionate ribbing; a playful nudge when nothing less than a headlock and a noogie will do. There's a fundamental flaw present in the screenplay, which has been knocking around since 2009, in that while it's free to mock superhero movies with gay abandon (the opening credits knowingly lists 'A Hot Chick' and 'A CGI Character' in its cast list), it cannot exist in the current Marvel/Fox stable without also adhering to its rules. Referencing a reliance on tired and dated plot points does not also excuse them.

It is both subversive and submissive, often in the same sentence. 'Pool makes a meta joke at the expense of the X-Men's confusing casting timelines ("Which Professor, McAvoy or Stewart?"), but is forever teasing the possibility of playing a larger part in the wider X-Men universe. The real punchline, I guess, is that at some point, if the movie ends up being as successful as the producers hope, they have to come up with an answer. 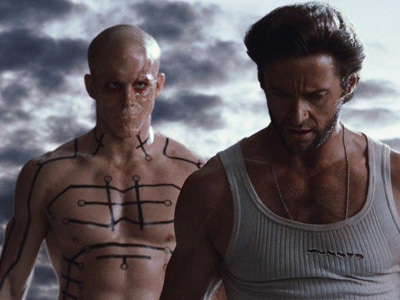 Oops, wrong movie. See? We can be subversive too!


I liked Deadpool most when it was just being funny on its own terms. There's a sight gag involving one of Deadpool's regenerating limbs that manages to be both sweet and disgusting; a great 'deciding my superhero name' scene with an ace accompanying Lonely Island song; a brilliant fourth wall break within a fourth wall break ("That's like... 16 walls!"). Ryan Reynolds arguing with an old blind lady about the merits of various IKEA bookcases is not something you'll find in any other X-Men movies. More jokes hit than miss but there's still lots of padding with juvenile language: every other line is shit this and fuck that and suck this and cock that. Deadpool suffers from being a movie that feels like it craves your approval.

Amusing as such clowning can be, there's still the fairly rote origin story to tolerate, plus a healthy dose of un-ironic sexism (prostitutes, strip clubs, a gratuitous sex scene) that does tend to take the edge off. If Deadpool had been half as bold and inventive as its own marketing campaign, it'd have been a triumph: a middle finger to a stale movie genre that's getting mouldier by the month. As it is, Deadpool wants to have its cake and eat it but only succeeds in regurgitating the same old stuff we've been fed for years.

More:  Deadpool  Tim Miller  Ryan Reynolds  Superheroes  Morena Baccarin  Ed Skrein  TJ Miller  Gina Carano
Follow us on Twitter @The_Shiznit for more fun features, film reviews and occasional commentary on what the best type of crisps are.
We are using Patreon to cover our hosting fees. So please consider chucking a few digital pennies our way by clicking on this link. Thanks!