Let's just re-establish The Boss Baby Clause from earlier this year: Despicable Me 3 is a kids movie, and it was watched in the company of a kid, and it was enjoyed by said kid, thus to me, it was a successful movie. Writing criticism of movies patently not made for you is a fool's errand, but we're all professionals here, so let's try and engage the critical faculties and fire up a review for old time's sake. Despicable Me 3 is... fine? I guess? Let's say yes.


Despicable Me 3 could have been made 500 different ways. There is no wrong way to make the third movie - fourth if you count the Minions spin-off - in a billion-dollar franchise. This movie will make lots of money, perhaps rightly so, but at no point will anyone involved in its production have to publicly comment that "it wasn't made for the critics" or "we can do better" because no one cares what it's about, not really. Despicable Me 3 proves itself simply by existing: the content of the film is basically irrelevant. I knew that going in, and I am still acutely aware of that having paid to see it this morning.

I don't know. I like movies that take risks. Even kids movies. I feel like maybe those movies don't exist any more. Despicable Me 3 is safe. It has no corners. No one involved in its creation is going to find itself embroiled in a big hairy sex scandal. The presence of South Park's Trey Parker as the movie's villain did give me hope that Despicable Me 3 would have a subversive element to it, but that never materialises. Parker plays the bad guy, Balthazar Bratt, who is such a 'Will that do?' villain you can't really have fun watching him. Bratt is a former child actor who played a supervillain kid on an '80s TV show (?) and who is now grown up and convinced he's actually a real supervillain (??) and also he has silly hair and a keytar and his weapon is bubblegum (???). Okay! The most important thing to remember is that he loves the '80s. That's his joke. His one joke. 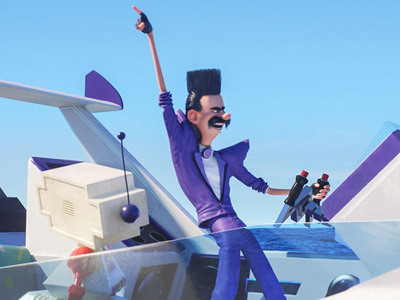 His theme song is 'Bad' by Michael Jackson, which is clever.


Universal have spent lots of money on trying to make Despicable Me 3 noteworthy, but ultimately, only the music is memorable. There are tracks used here - '80s songs, natch - that I know for a fact would have set the studio back a fortune in rights alone. They've also tried to one-up themselves by having Pharrell Williams - whose song 'Happy' from Despicable Me 2 went on to become the song of the summer - provide a whole soundtrack of original songs. Unfortunately there's barely a single scene that you can enjoy without being faintly aware there's a man in a big hat being paid lots of money to sing underneath it.

Despicable Me 3 bears all the hallmarks of a sequel with cash to burn and no time to waste. For stunt casting, see Julie Andrews voicing Gru's Mom, a role that gives her about four expository lines and nothing else. For wasted talent, see Jenny Slate, playing a character that's introduced in one early scene and then literally never seen again. For lazy concepts that aren't properly explored, see Gru's twin brother, Dru, who is also voiced by Steve Carell albeit with a slightly less grating accent. The Minions bits are the best bits. Again. Despicable Me 3 feels like it's in the shadow of its own spin-off.

Again, though: The Boss Baby Clause cannot be overlooked. Despicable Me 3 is bright, colourful, loud, silly and enjoyably juvenile. It has fart gags, dance fights, Acme-style gadgets, giant robots and little yellow banana people. Go with a little person on a wet afternoon and it'll very likely brighten the mood. I've given it three stars but it might as well have been rated a picture of me, shrugging apologetically.

More:  Despicable Me 3  Despicable Me  Minions  Steve Carell  Kyle Balda  Pierre Coffin  Eric Guillon  Steve Coogan  Trey Parker
Follow us on Twitter @The_Shiznit for more fun features, film reviews and occasional commentary on what the best type of crisps are.
We are using Patreon to cover our hosting fees. So please consider chucking a few digital pennies our way by clicking on this link. Thanks!