The first Kingsman movie made a stylish entrance at precisely the right time i.e. just as Bond movies were about to get rubbish again. Spectre would go on to prove that being a secret agent was no laughing matter, and absolutely no silly business would be tolerated; Kingsman, on the other hand, was of the opinion that spies just wanna have fun, grasping hold of Moonraker's blunt end with a nudge and a wink and performing a passable karaoke cover of the Moore era's kitschiest hits. Unfortunately, that included the era's sexist horseshit: Kingsman signed off with a jarring anal sex joke that - if you'll pardon the single entendre - left behind a sour taste. The sequel, Kingsman: The Golden Circle, is of the very same caliber as its predecessor, in that it is ostensibly a fun, colourful and occasionally inventive action flick, but one that is nonetheless torpedoed by an off-colour joke so brazen and shameless it defies belief.


I'll get on to the rest of the movie later, but let's address the offending scene first. Eggsy (Taron Egerton), now a fully-fledged Kingsman agent, attends Glastonbury with Agent Whiskey (Pedro Pascal), his counterpart from the US agency, Statesman. His mission: to woo and subsequently plant a tracking device on Clara (Poppy Delevingne), the girlfriend of one of the movie's villains. I say 'on', but the more accurate preposition would be 'in': for reasons unexplained, this tracking device has to be attached to Clara's mucous membrane - and it's not going up her nose.

To clarify, with exactly as much tact subtlety as the movie itself offers, that means it's going up her fanny.

Correct. There is an entire scene in the motion picture Kingsman: The Golden Circle, released in the year twenty and seventeen, which sees a man forcibly introduce a foreign agent into an unwitting female character's vagina.

I know what you're thinking. You're thinking, It's just a bit of banter, Ali! Just a laugh! A bawdy joke like the old Bond movies! Lighten up! No. Fuck off and no, you Sun-reading cunt. Bond's Stone Age sexual politics were equally horrific, granted, but it was all grounded in innuendo; I don't ever recall watching Sean Connery finger-fuck anyone. The gag, as horrendous as it sounds on paper, is even worse on screen. Vaughn shoots the insertion (oh god) in the kind of closeup usually reserved for episodes of One Born Every Minute: his camera zooms in on Delevigne's bare waist, then, presumably while rubbing his knees, the director slowly pans down, full screen now, the actress's frilly gusset filling the entire frame, until a male finger creeps under her waistband, lower, closer, until we're treated to an 'internal' shot of the device being implanted.

I saw this movie in IMAX. 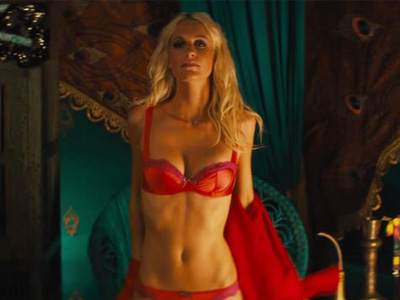 I tried to find a still of Delevigne not in her underwear but there aren't any.


There are literally dozens of ways this scene could have been shot - a cutaway, a facial expression, a smash cut to a sight gag - but Vaughn intentionally chose the most gratuitous option. He's no idiot. He knows what he's doing. He saw the heat he copped for the bum sex bit in the last film and intentionally doubled down. Matthew Vaughn, the arch provocateur, waggling a dildo in your face to see if you'll flinch. Matthew Vaughn, the ITV2 Lars Von Trier. Matthew Vaughn, the enfant terribles of Hollywood, wearing his fake pair of tits and his stag do mankini, daring you to look away. It's just all so horribly pathetic and sad.

It's a shame, because the rest of the movie is moderately entertaining in small doses, which is unfortunate because the entire treatment is two and a half hours long. The American cast are mostly wasted (Channing Tatum is literally put on ice; Halle Berry is stuck behind a desk and has a character arc where she's stuck behind a desk; Jeff Bridges is locked in a boardroom) but Egerton has no small amount of charisma and even a little Colin Firth goes a long way. I want to tell you more about this movie, but I keep coming back to the fingering thing. Is it not bothering anyone else?

Right. Forget the minge scene. Concentrate on the rest of the movie, like the Elton John cameo that's overused, or Matthew Vaughn's inability to shoot an action scene without cutting it to an overloud pop song, or - OH AND BY THE WAY, re: the whole fingering thing we're definitely not talking about, the joke that immediately precedes this scene has Clara tell Eggsy that she's totally cool if he wants to piss on her. Which is a totally fun joke, right? Haha! Banter! Just harmless banter about a girl who likes golden showers and shagging so is definitely fine with having Q branch stuffed up her twat! Classic! See you on LADBible, fellow men!