As he took to the stage at the London Film Festival, Richard Ayoade stumbled through the introduction of his new film. He turns to his executive producer, who just so happens to be Michael Caine, and says, "You're probably used to working with someone much more professional." But the modest Ayoade has nothing to worry about. The Double is an extremely professional piece of work, assuring his place as one of the country's finest directors/quiz show panellists.


Based on Fyodor Dostoyevsky's 1846 novella about a lonely man's life unravelling when his doppelgänger shows up, Ayoade's second directorial effort is a deeper, more challenging subject than his utterly brilliant 2011 coming-of-age debut, Submarine. Yet just two films into his filmmaking career, Ayoade directs with the confidence of a man who's been behind the camera for years. Never once does the heavyweight text of a Russian philosopher flummox him. 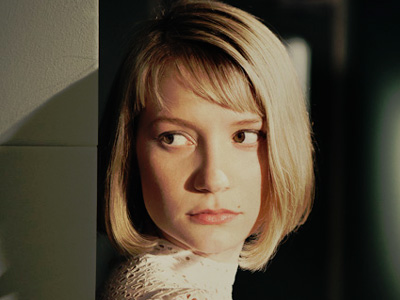 
Jesse Eisenberg plays Simon James, the aforementioned lonely man. Living a meagre existence, he's shy, quiet and socially awkward. Simon is unappreciated, unnoticed and unrecognised in the unspecific data entry job he's been in for seven years. He lives alone in a dank one-room apartment in a grim, dystopian alternative reality – a world bereft of daylight, good manners and primary colours. The only excitement in his life is spying on the lovely photocopy girl, Hannah (Mia Wasikowska), who lives across the way, and is probably just as equally as lonely.

The sadsack is the type of role Eisenberg's been milking for years, but here, he really ramps it up. Simon, in an ill-fitting suit, bows down to confrontation and finds himself forever apologising. Early on, he gives up his seat on an empty train simply because a rude commuter tells him to. Later, a worker begins to stack boxes onto the train as Simon tries to leave, leaving him stuck, too afraid to simply say 'Excuse me'. He's the wettest wet blanket Eisenberg has ever played, and it says a lot for his talent that it's a shtick that hasn't got tiresome. 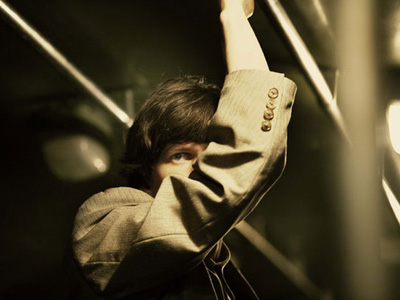 The ultimate indignity: forced to smell his own pits on the Tube.


The appearance of his doppelgänger, James Simon, allows Eisenberg to unleash more of the cocky, arrogant side he showed in Now You See Me. Arriving as a new employee, a confident James makes good with the bosses, cracks jokes with the staff, quickly rises up the company ranks and catches the eye of Hannah. All the while, no one notices the two men's similarities, but when no one notices Simon anyway, it's no surprise. What begins as a friendship between the Eisenbergs escalates into a game of oneupmanship; soon enough, James has accomplished more in a few days than a jealous Simon has in his entire life.

Ayoade manages to get the balance between comedy and drama just right, with some good old-fashioned tragedy thrown into the mix too. Like Dostoyevsky's original story, much of the film is left open for interpretation. But for some modern-day cinemagoers, ambiguity can be a tad frustrating: there are a few things that don't quite add up and many questions do go unanswered. Any viewer who enters expecting IT Crowd-like japes will be left disappointed and confused. Fans of Submarine, on the other hand, will feel the need to stand and applaud.

Richard Ayoade has conquered his 'difficult second album' with gusto. From an intense and nervy score to a comforting supply of delightful 'friends of Richard' cameos, everything just clicks nicely into place. Michael Caine must be chuffed.

More:  LFF2013  The Double  Richard Ayoade  Jesse Eisenberg  Mia Wasikowska  Wallace Shawn  Submarine
Follow us on Twitter @The_Shiznit for more fun features, film reviews and occasional commentary on what the best type of crisps are.
We are using Patreon to cover our hosting fees. So please consider chucking a few digital pennies our way by clicking on this link. Thanks!