The movies' use of sports as a metaphor for personal growth far outstrips the idea's efficacy in real life. Your team's against-the-odds victory in the Rumbelows Cup is unlikely to inspire a realisation that you have your priorities all wrong and lead to a marriage proposal to your long-suffering girlfriend.

But there's something in it. No, watching the snooker doesn't really mimic the ups and downs of real life, but there's a real euphoria and a despondency that sports can inspire, which can convince you momentarily that your life is amazing or terrible. Translate that to the big screen, framed around a guy who's learning to be a bit less self-centred or to pull himself out of a humdrum existence, and you've got yourself the template for a sports movie.


Million Dollar Arm is just about everything a sports movie should be. Based on true events, for its early scenes it takes advantage of Jon Hamm's douche persona used in Mad Men and more goofily in Bridesmaids, then moves him towards self-actualisation and redemption through - wait for it - Indians lobbing baseballs really fast. A sports agent at the end of his financial tether, he comes up with a brainwave while channel-flicking between Susan Boyle on Britain's Got Talent and a cricket match: India's an untapped market. What if he found two bowlers through a talent contest, trained them to pitch and set them up in Major League Baseball? Within minutes he's in Mumbai on the hunt. 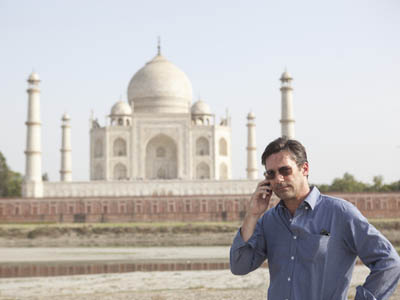 "Peggy? Tell Roger I just pitched Patak's and they loved it."


Inevitably, this being a Hollywood film with scenes in India, there's a lot of comedy mined from Indian stereotypes. He acquires an assistant, Amit (Pitobash), comically eager to please, and the two kids with the golden arms he eventually unearths (Madhur Mittal and Life of Pi's Suraj Sharma) are polite and deferential to a fault. It's a problematic idea, plundering the subcontinent for a meal ticket to take back home, but there's a Disney sheen to it and it's carried through with inspirational setpieces and an uplifting score. And what's more, the problems are addressed, albeit indirectly, by how Hamm's character comes to realise these kids aren't commodities; they're the family he's always needed.

This is achieved fairly simply through what scientists refer to as the Turner & Hooch Method. The Indians come and live with him and disrupt the bachelor existence he's hitherto enjoyed but that deep down he knows is empty, and he hates it and loses his temper with them but then learns that they represent something missing in his life. Then they get shot in a drug raid at the end but they have puppies so it's all OK or something, I forget. The vet in all of this is his tenant Brenda (Lake Bell), who acts as a direct cipher for his conscience and calls him on his shit. 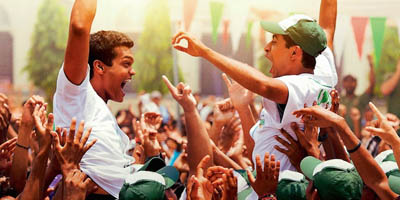 "YES! This is all markedly less racist than it could've been!"


Where this deviates a bit from the obvious Jerry Maguire (& Hooch) path it seems to be following is in that most sports movies tend to involve the cynical lead coming to realise he loves the sport and not just what it can do for him financially. Million Dollar Arm is more concerned with his learning to love the players, not the game, and seeing the humanity behind it. (The polar opposite of Moneyball, a sort of anti-sports movie, which promotes the virtue of removing intangibles like passion and "heart" from the game in favour of cold faith in statistics.)

Hamm has enough bad guy roles and comic performances behind him that this transition is straightforward and easy to accept. Yes, he has leading man looks, but when Brenda's muscled boyfriend shows up he looks like a bit of a loser next to him like anyone else would. Make no mistake: it's a great skill to inhabit a TV role like his, which relies on being the guy who owns every room he walks into, then convince us he's in a hole and doesn't know his way out. With Mad Men wrapping up next Spring, he's well on the way to breaking out of TV and securing full leading man status. Like that guy from Turner & Hooch.