Review: Cold Pursuit sees Mr Plow out for revenge in a temperate thriller 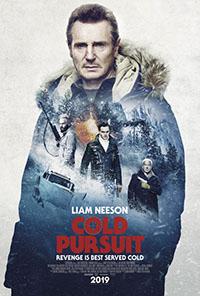 Over the past decade, Liam Neeson has had an interesting evolution from Serious Actor to Tough Action Dad, exclusively playing single-minded individuals dispensing their own brand of vigilante justice. Since Taken, he’s developed his particular set of skills to work within the same template over and over again, becoming a one man wrecking crew in the likes of Run All Night, Non-Stop and then Non-Stop-But-On-A-Train, The Commuter. He’s even punched a wolf in the face. All batshit crazy, yet enjoyable nonetheless. But in a recent controversial interview, Neeson revealed he was once almost in his own version of American History X, contemplating taking a cosh to any “black bastard” who crossed his path to quench his own insatiable thirst for revenge. His telling of this story was probably intended to highlight how revenge never helps anyone, but instead highlighted that this is a reality for black men and people of colour, and attempts to rationalise these thoughts could be seen, at best, as attempts to normalise racism. And to think, my main concern before seeing the film was how many snow puns and Simpsons’ gags I could shoehorn into this review.


Thankfully, Neeson’s Racist Rampage never came to fruition, but whether you hail Neeson for his candour or question his racial bias, seeing his single-minded anti-heroes stomp, stab and shoot their way in the name of vengeance certainly now casts his on-screen presence in a different light. His character, Nels Coxman is a likeable everyman, a humble snowplow driver who sets out for bloody payback after his innocent son is caught up in a drug turf war. He’s surprisingly adept at dispatching the bad guys in increasingly wild and disproportionate ways having learned the odd tip from crime novels.

Director Hans Petter Moland (remaking his own film, In Order of Disappearance) isn’t overly concerned with the morality and ethics of revenge, but instead focuses on how one act can have spiralling consequences. As Coxman works his way up the chain that led to the murder of his son, more bodies are tossed on the heap as a result of him unwittingly inflaming the tension between the rival drug lords.

It’s this opposing dynamic which could have diluted the narrative and taken the attention away from Coxman’s story, but manages to put Cold Pursuit into a different category of revenge thriller, slowing down the pacing without sacrificing the tension. Peter Bateman’s Viking is at the top of the chain, a smarmy and sleazy sharp-suited health nut who refuses to let his own son eat sugar, but will happily behead his own henchmen and is more than casually racist towards his Native American counterpart, White Bull (Tom Jackman). Bateman assumes it’s White Bull offing his dealers and calls off an already uneasy truce by killing White Bull’s son. In retaliation, White Bull goes for Viking’s progeny and a three-way dad duel ensues. 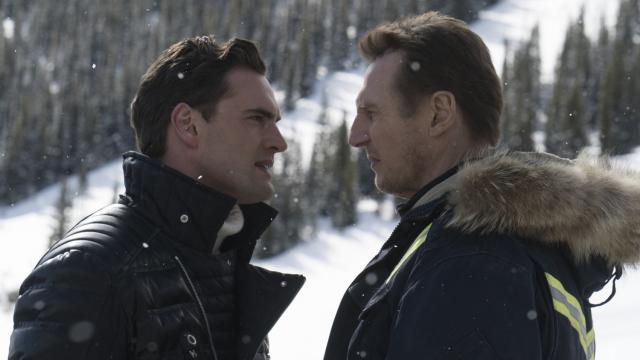 
The resulting deaths, while not overly inventive, are adroitly violent and evenly spaced out, with a neat running gag with each deceased minion given a black memorial screen with a graphic denoting their religious leaning. Cold Pursuit is full of laughs, although more often than not err on that uncomfortable type of giggling rather than straight up LOLs as Frank Baldwin’s script is peppered with one-liners and surprising set-pieces. An emotional moment in a morgue is undone by a particularly slow and squeaky crank to elevate the body, and slap bang in the middle is an unexpected and touching love story, which is then immediately torn apart. One of White Bull’s henchmen threatens a hotel receptionist with the most bluntest of weapons: a bad review on Yelp.

Baldwin attempts to give every character a backstory, but this is a story largely about men and never-ending cycles of violence, meaning the female characters are pushed to the sidelines. Laura Dern is criminally underused as Coxman’s wife, who leaves him a Dear John note after finding out her son’s non-existent double life involved having a Facebook account she didn’t know about. Emmy Rossum’s Colorado cop is given slightly more to do, but never really digs deep into her investigation that leads to her brushing up against Coxman without any real sense of jeopardy.

Neeson takes aim, probably at someone he shouldn't.


Alongside this there are also undoubtedly some questionable stereotypes: Moland’s attempts to sympathise with the plight of an indigenous culture are handled clumsily, although Moland isn’t afraid to push pause on the action to focus on quieter character moments, which could possibly make a bloodthirsty crowd feel slightly cheated. Coxland’s sister-in-law is also basically reduced to a walking stereotype, but these obtuse angles feel like a deliberate choice in order to provoke a reaction by just not giving a damn.

Neeson’s deadpan performance is undeniably entertaining, but given his recent admissions make it less palatable. Cold Pursuit has all the makings of a dumb cult classic with its handling of violence and dark humour, but now given what we know it makes it all seem just a little less funny and a little more serious.

More:  Cold Pursuit  Liam Neeson  Hans Petter Moland  Laura Dern  Tom Bateman
Follow us on Twitter @The_Shiznit for more fun features, film reviews and occasional commentary on what the best type of crisps are.
We are using Patreon to cover our hosting fees. So please consider chucking a few digital pennies our way by clicking on this link. Thanks!