Cut to the Wick

Review: John Wick: Chapter 3 is a war on the senses - and on the balls 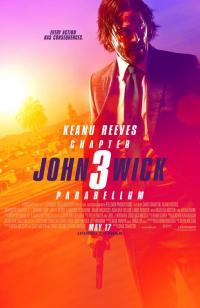 We all know there are six basic story types: the fall, the fall then rise, the rise then fall, the rise from nothing, mismatched buddy cops, and stop that wedding. The third installment of the John Wick franchise delivers a seventh - the fall then rise then kick you in the bollocks, go to Casablanca, rise, then literal fall. The film's subtitle, Parabellum, translates to "prepare for war" - in this case a war on limbs, vital bodily organs, and your ability to stomach extreme violence, so you can't say it didn't warn you.


Following directly on from Chapter 2, our bullet-proof designer-suited John Wick has been made excommunicado after violating the one assassin code: don't do a killing on company premises. This means he's got one hour to get out of dodge until a bounty is placed on his head, and I'm not talking about the chocolate bar. After 6pm Eastern Standard Time, he becomes fair game for any hit person in the area, meaning that every room John Wick walks into, he has to kick, punch, shoot, slice, dice and maim his way out of it. Taking Elmore Leonard's final rule of storytelling to leave out the boring bits as gospel, the screenwriters quite rightly focus on violent set piece after violent set piece, with roughly ten minutes of dialogue. Considering that director Chad Stahleski is a former kickboxer, it's safe to say he wasn't brought in to develop moral changes in his protagonist, not when said protagonist can demolish someone twice his size with just a book. Fuck you, words.

Following a stonking opening act, in which no neck is left unsnapped and no groin is left unkicked, things settle down briefly for a fairly conventional middle, which is when all the plot is shoehorned in. Desperate to escape, Wick gets safe passage using more of those fantastical totems established in the previous films from Angelica Huston, who looks like she thoroughly enjoys playing a snarling, Russian matriarch of a ballet school. Wick's jaunt across the globe does mean fending off identikit goons sent by the High Table, the shadowy organisation that runs assassinations to order as well as a successful global luxury hotel chain, but Stahleski manages to break up the unrelenting combat with some well-placed drops of humour and a bit of a deep dive into the mythology of John Wick's world. 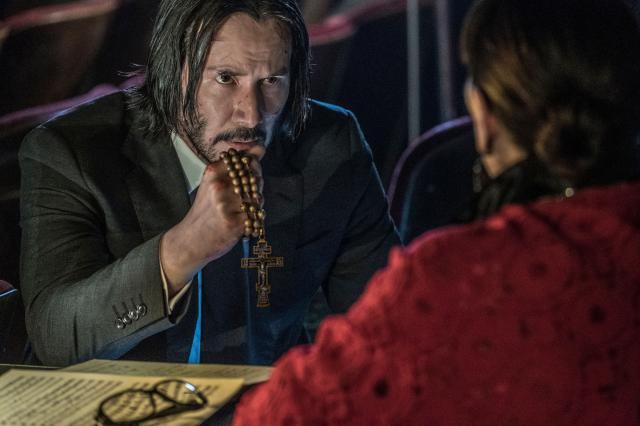 
The video game doubloons and intricate markers return, as do the glam gals of the typing pool who send out orders via antiquated Macintoshes. While the coins (and Laurence Fishburne's pigeons) are explained with a helpful bit of exposition, the tattooed administrators are still shrouded in mystery, leaving me to hope they'll be in the forthcoming spin-off TV show, because I would watch the shit out of that.

The climactic battle, while lifted straight from a video game, is incredibly slick and visually striking, thanks to that ubiquitous neon backdrop. But when the stakes are this high, Stahleski steals a march from Mission: Impossible - Fallout and focuses on Wick's fatigue as he gets flung around trying to make his way to the final level. Keanu absolutely sells it the entire way through, pushing on despite his body obviously wanting a breather, showing that he’s not the superhuman killing machine we previously thought.

Parabellum ignores all the basic tenements of a movie, including plot, characters arcs, context etc, making up a new rule book only to rip it up in front of you. But as Ian McShane's Winston says of our titular hero: "He knew the rules. And he broke them". Prepare for bloody mayhem.

More:  John Wick Chapter 3 Parabellum  John Wick  Chad Stahleski  Keanu Reeves  Halle Berry  Anjelica Huston
Follow us on Twitter @The_Shiznit for more fun features, film reviews and occasional commentary on what the best type of crisps are.
We are using Patreon to cover our hosting fees. So please consider chucking a few digital pennies our way by clicking on this link. Thanks!