Review: Spider-Man: Far From Home but back to brilliant basics 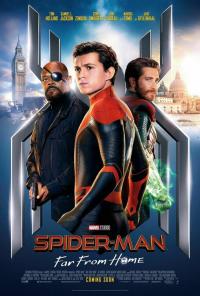 The epic, end-of-times extravaganza of Endgame left us with many questions: Has the timeline now been irreparably changed? Who are the Avengers now? Where the fuck did Valkyrie suddenly get a flying horse? And also, how does the world adjust to half of its population now having a five-year age gap? What about all the parents that missed out on seeing their children grow up? All the spouses that remarried in that time? All those people that were snapped out of existence while on their way to return something to a shop, only to be brought back and find out that their receipt is now five years out of date? If those questions are going to be addressed at all, it isn’t happening with this first film out of the gate since the 'snapback'. No, this is just very much Spider-Man back to doing whatever a spider can.


Anyone wondering why Phase 3 of the MCU should end with this film rather than the high-stakes closer of Avengers: Endgame, will realise the value of an epilogue here. There’s drama in showing the aftermath of such a huge plot point, and there’s emotion to be wrung from Peter Parker coming to terms with it all. But Christ that sounds like a massive drag, so thankfully it’s all explored in a minimal way. In fact, the stage is set and practically dismissed in hilarious fashion within the first five minutes and, with this movie set eight months after the end of the last and set around a class trip to Europe, that appears to be enough time and literal distance for the world to - somehow - appear like there was never a problem at all. But appearances can be deceiving.

Besides what is now apparently being referred to as 'the blip', there is, of course, the other development to address: the death of Iron Man. Parker’s grief hangs over the whole story, but just as the first film saw him trying to prove himself worthy of a place in Avengers HQ, this one sees him questioning whether he can, and should, step into the role left behind by Stark. Both play neatly as replacements for Uncle Ben’s "great power" origin lesson. This is Marvel cleverly finding new ways for Spider-Man to discover the importance of great responsibility. 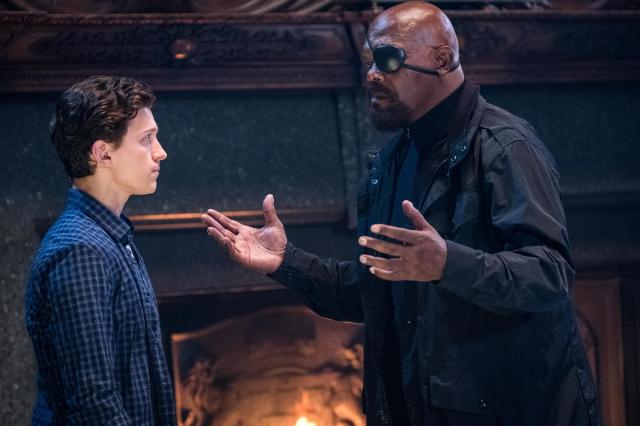 'Responsibility' in this case meaning quitting on your own education to spend your life swinging around in spandex.


So there’s drama and there’s towing the MCU line, but at the centre of the web of plot threads is that same successful high school comedy formula that made Homecoming such a fun, refreshing reboot of the character. It helps, of course, that the entire core cast from Spider-Man: Homecoming were apparently all members of the Snap Gang and so can continue in this film with no glaring age issues. So what we have predominantly is a Go-Gos-soundtracked teen-rom-com filled with friendship and bullies, hormones and homework. It’s to the film’s immense credit that the bright, colourful tone is consistently spot-on, never seeming too flippant when mining ‘the blip’ for comedy while never getting too hung up on the angst of Parker’s multiple burdens. It’s a comic adventure in every sense, finding brilliantly silly ways to poke fun at Parker’s superhero double-life while also emphasising the threat and the stakes.

"
"
The film as a whole is conducting its own deception
The double-life element is particularly important in this film, contributing to its major theme of deception, which plays right through even to the end credits. Parker’s usual struggle to sneak away from his regular commitments and perform acts of heroism, letting his friends down in the process, gets kicked up into a new gear when Nick Fury turns up to ruin Spider-Man’s Summer Vacation, bringing with him an arsenal full of internal conflict for Parker. At the same time, there are secrets everywhere, from identities to crushes to weapons technology, and there are even several hints at the power of fake news.

One twist in particular is unlikely to surprise too many viewers though, no matter how much comics knowledge they come armed with. The film presents the big reveal with all the flourish of major rug-pull on the level of Michael Keaton opening the door in Homecoming, but you don’t need special Stark Industries glassware to see it coming a mile off. That’s not to say that revelations aren’t important to a film so focused on duplicity - after all, much of Parker’s struggles derive from him trying to make one of his own and declare his feelings to the girl he likes - but the best surprises come from the actors themselves.

And the explosions, obviously.


Zendaya adds layers of emotional range to MJ’s sharp deadpanning, while Jake Gyllenhaal excels at playing a hero cut from the classic mould, adding warmth or eccentricity depending on what the scene requires. And of course, Tom Holland, while not exactly a revelation because it shouldn’t surprise anyone by now, continues to be a perfect Parker, equal parts nervous energy, underdog spirit and superstrength of character. It is his steadfast charm that remains the one reliable constant in a movie so concerned with deceit and trickery.

With everything that happens on screen, you get the impression that the film as a whole is conducting its own deception at the same time, using gags and action to expertly divert audience attention away from the real trick it is performing: making everyone forget about the events of Endgame. It’s a tall ask, but it’s addressed head-on here, with one character even making the point that, after Endgame, anything seems possible, so people will believe in anything. Tapping into real-life sentiment, if the whole world is in a state of turmoil and disbelief, how can we return to a status quo?

The answer here seems to be, if people will believe anything right now, maybe we can get them to believe that none of the outstanding questions they have about the recent seismic shifts really matter. On the strength of this film, there’s a compelling argument made for the best possible future lying in simply drawing a line under the past and moving on.

More:  Spider-Man Far From Home  Spider-Man  Marvel  Tom Holland  Jake Gyllenhaal  Jon Watts
Follow us on Twitter @The_Shiznit for more fun features, film reviews and occasional commentary on what the best type of crisps are.
We are using Patreon to cover our hosting fees. So please consider chucking a few digital pennies our way by clicking on this link. Thanks!