The things you remember from Star Trek Into Darkness: the theatrical dramatic pause before the shitty Khan reveal; Benedict Cumberbatch doing that weird over-enunciation thing he thinks makes bad dialogue sound better; Kirk kicking the warp core like a broken printer; the bit where Bones basically cures death; Tribbles; the platform game level at the end where Spock channels Super Mario. The things you don't remember from Star Trek Into Darkness: the good stuff, I guess? I don't recall it being a terrible film, quite enjoyable in the moment in fact, but a post-viewing breakdown revealed the story to have as much structural integrity as a piss-soaked newspaper. Star Trek Beyond, however, rights everything that Star Trek Into Darkness put wrong. It may not be as polished or as ambitious as its predecessor, but it is far truer to the core themes of what Trek is all about; crucially, it's a film that looks to the future, not the past.


The key differentiator between Star Trek and Star Wars has always supposedly been that Trek is the more cerebral franchise of the two. I think it's safe to say that starship starsailed the day Fast & Furious director Justin Lin was hired. But. Let's not kid ourselves here. Leave the chin-stroking and philosophising to small-screen Trekkers with the luxury of a series arc; Star Trek movies have always been about unashamed entertainment, and Beyond delivers a payload of warp-powered fun that never once steers towards pretension. Fundamentally it's a standalone Star Trek episode writ large - something Kirk even alludes to in his captain's log - but it says a lot about 2016's cinematic output thus far that an original story with new characters and no intention of teasing out sequels or spin-offs feels quite so novel. 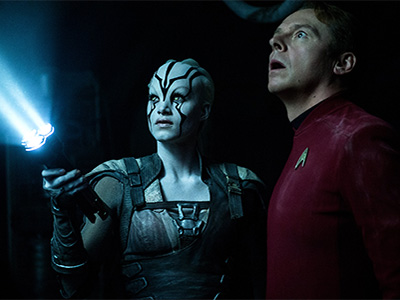 Jaylah: an alien, yet also the name of every second kid being yelled at in your supermarket


Sofia Boutella's alien warrior Jaylah is the perfect example of how Star Trek Beyond exceeds low expectations. She is a brand new character, not torn from the pages of a comic-book or adapted from an old TV episode or rebooted from a kids' fucking yoghurt drink or something. She's new. Remember new? Remember characters arriving with no baggage or expectations or fanboy protests? Jaylah is fierce and beautiful and sweet and funny and she fits right in. Why do more big franchise movies not do this? Why are we so obsessed by being given things we already recognise? I could easily see Jaylah becoming a top-line star of the franchise, and at no point did her inclusion feel like pandering to a female teenage audience. So well done Jaylah. Nice to have you on board.

And well done Simon Pegg and Doug Jung, because Star Trek Beyond's script is straightforward, accessible and coherent; there are precious few needless twists and turns, no temporary anomalies or dark matter macguffins, and most refreshingly of all, no artificial drama in the crew dynamic. After three years and two movies together, the Enterprise crew act and behave like a unit. Relationships are already established: there's no attempt to destabilise or rebuild them. Star Trek Beyond is a movie of economic storytelling: the crew are led into a trap, meet a space bastard who has them outgunned, they hatch a plot to foil his attempt to destroy the universe because he hates having to spend six hours in makeup every morning, and they boldly go and get the fuck on with it. It's a better movie for refusing to linger on tensions it knows it doesn't need.

Captain Kirk is riding a motorcycle, why is he riding a motorcycle? Because this is a Justin Lin movie; here's a guy who knows a little something about gratifying an appreciate audience with a fun movie or two. So yeah, maybe there's less guff about parallel timelines and not so much of the old existentialism and thinky-talk, but there is a scene where Chris Pine kicks some ass with a series of motorbike stunts, and there is a familiar musical cue so flagrantly crowd-pleasing it doesn't matter that it makes the opposite of sense. We're using Vin Diesel logic now, and screw it, it works. Star Trek hasn't so much dumbed down but pulled its head out of its arse. 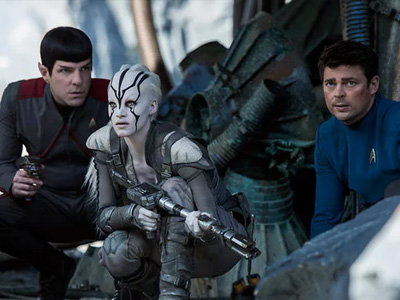 
Subsequently, there is lots to enjoy, and very little to pick at. Pegg's punchy script gives Bones and Spock all the best lines ("Your banter is illogical," Spock doesn't but might as well say), Pine is Shatner-esque in all the right ways, and Anton Yelchin is lovely and funny and heartbreaking. There is precisely one brilliant drop-yer-popcorn moment at the beginning when Idris Elba's villain Krall reveals his ship(s) but apart from that it's line-by-line Bad Behaviour 101 from our monster of the week. There is no plot point as egregious as using alien blood to reverse the effects of death, for example. Again, Star Trek Beyond succeeds simply by virtue of the fact it doesn't do anything mind-numbingly idiotic - it trades a nice line in the 'big dumb fun' brand of stupidity instead of the 'hound Damon Lindelof off Twitter' variety.

Whether it'll hold up or not I don't know, but I do know Star Trek Beyond is most definitely a shot in the arm for the franchise: the mission is once more to boldly go where no previous iteration of these established characters have gone before. The temptation then, once again, is to compare the revitalised Star Trek to the recent Star Wars retread, and though it hardly feels like a competition in terms of big bucks, big bangs and BB-Units, only of of these two franchises feels like it's evolving in the right direction. (*Reads that Star Trek 4 will be all about Kirk going back in time to meet his dad*) OH FOR FU-

More:  Star Trek Beyond  Star Trek  Justin Lin  Chris Pine  Idris Elba  Sofia Boutella
Follow us on Twitter @The_Shiznit for more fun features, film reviews and occasional commentary on what the best type of crisps are.
We are using Patreon to cover our hosting fees. So please consider chucking a few digital pennies our way by clicking on this link. Thanks!