Despite its lineage, The Bourne Legacy has received a frosty reception from critics thus far and has had an almost completely anonymous marketing presence – rather than dynamically burst into cinemas next week, rolling up its poster and ramming it down audiences' throats, it shuffles in apologetically to be met with highly suspicious glares. This is entirely unnecessary, because while Legacy couldn't ever hope to match the Paul Greengrass/Matt Damon movies for sheer punch and propulsion, it's as close to replicating them as you could expect, and marks another excellent entry into the Bourneography.


Though it most certainly is a cash-grab of sorts, the amount of effort spent making sure The Bourne Legacy remains credible is to be commended. No cop-out reboot/prequel here, no sir; rather than frantically shred all the hard work put in by Matt Damon and friends, Legacy runs concurrently with the events of The Bourne Ultimatum, leaving the door open for Bourne himself to return if he feels the need. In the meanwhile, we follow Jeremy Renner's similarly-gifted agent Aaron Cross, who is targeted for deletion when Bourne's off-screen antics put the willies up Edward Norton's government black-opper. I guess it's what you'd call a 'sidequel' if you were a horrible person and nobody liked you.

Renner is no Matt Damon, but he's certainly on the right road. Cross is little more than a Bourne clone, in all honesty, but Renner gives him a muscular presence in the movie's action scenes and humility in the moments between chases. This is none more evident than in one extended sequence, where Cross scales the side of scientist Rachel Weisz's house in one smooth movement to dramatically take out an interloper, before chastising her for not knowing his name, despite her taking his blood several times. He doesn't quite have the magnetism of a Damon or – dare I say it, even a Tatum – but Jeremy Renner is slowly becoming the real deal. The Bourne Legacy is his best acting showcase since The Hurt Locker, and this comes from someone who loved The Avengers and Mission: Impossible – Ghost Protocol, where he was wasted. (Underused, that is. Not drunk.) 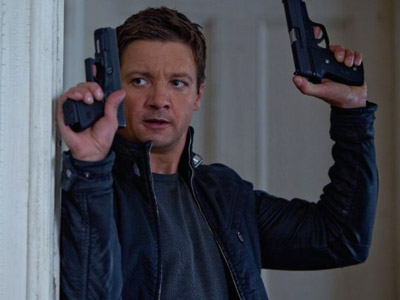 "Guys? I found these. Last chance to claim them before I shoot up that mattress."


While Legacy is reluctant to diverge from a winning formula (international jet-setting, close-quarters combat, improvised weaponry, Moby), writer-director Tony Gilroy is smart enough to keep things familiar without feeling like a retread. Gilroy – writer of the first three Bourne movies – cleverly plants Legacy's roots deep within the established universe, courtesy of brief cameos from the likes of Albert Finney and Joan Allen, and blink-and-you'll-miss-it re-runs of pivotal Ultimatum scenes (hope you weren't counting on seeing much of Paddy Considine's head). The rapid-fire dialogue is all reminiscent of Greengrass' trademark chatter, with the agency suits conversing in top-level government lingo and highly-stylised Sorkinisms ("You were given a Ferrari and your people treated it like a lawnmower"). The biggest crime Gilroy commits is quarantining Ed Norton into a little computer control room, where he's forced to shout at maps and marshal his staff like a schoolteacher.

Topping two hours, The Bourne Legacy could have perhaps taken a few lessons from its predecessors and been trimmed to a leaner runtime, although doing so would necessitate the removal of some of its most interesting elements and characters e.g. Oscar Isaac's poker-faced outpost agent and Rachel Weisz' lab colleague, whose terrifying stalk-and-shoot breakdown provides the movie with its most heart-stopping sequence. The Bourne Legacy doesn't need these characters, but it is infinitely enriched by their presence, and the interaction between them never feels rushed. Renner and Weisz form a neat, interdependent partnership on the run, and never resort to anything more romantic than hand-holding and a motorbike backie. Even Jason Bourne had sex with his hostage. 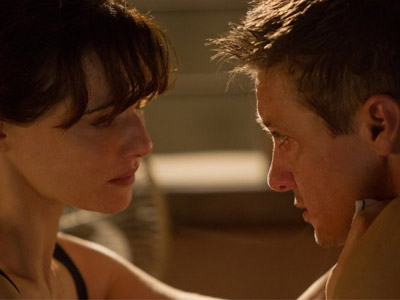 Sorry Rachel, but he's just not that into you.


In actual fact, The Bourne Legacy could benefit with further fleshing out in parts: Norton's history with Renner is limited to a few flimsy flashbacks, while a curious 'Flowers For Algernon' vibe is unexplored – weaned onto an intelligence-boosting blue pill by his agency, a cold turkey Cross insinuates he'll lose mental faculties the longer he's off his "chems", a theory supported when Norton's handler says he'll eventually "run out of brain". So basically we've been robbed of an action thriller in which the lead turns into a gibbering idiot who voluntarily hands himself into his local police station to claim his free speedboat.

Though it ultimately splutters towards the finish, lacking a credible threat and a sense of direction in its final third, The Bourne Legacy nonetheless stakes a claim to being a vital part of – for my money – one of the best action franchises of the new millennium. We'll never know what Paul Greengrass and Matt Damon would have done with a fourth Bourne movie, or if they'll ever make another one, but Legacy is as good a stop-gap as we could have expected for now.

More:  The Bourne Legacy  Jeremy Renner  Tony Gilroy  Edward Norton  Rachel Weisz
Follow us on Twitter @The_Shiznit for more fun features, film reviews and occasional commentary on what the best type of crisps are.
We are using Patreon to cover our hosting fees. So please consider chucking a few digital pennies our way by clicking on this link. Thanks!