An age of extinction. Well, it does go on for ages, but Michael Bay's fourth Transformers movie, while offering some CGI spectacle to knock your block off, threatens the eradication of the human race but never treats the prospect with much more than an afterthought.


They were toys once. I had a few. They turned from a thing into a robot then back again into a thing. It was a simpler time, and I long for it. When the uncomplicated pleasure of watching a robot turn into a Fiat Panda was somehow enough. Before IMAX. Before cruel, queasy hindsight revealed that literally everyone you'd been watching on TV was a sex offender.

Transformers: Age Of Extinction should transport me back to that age, working both as nostalgia for my generation and as awesome CGI fare for the next. It pulls off only the latter, leaving me stranded on memory lane's hard shoulder by rendering the toys charmless and unrecognisable (the Transformers don't actually transform all that much: a truck's not a lot of use when the skyscrapers start collapsing), and encouraging me to gawp at a 17-year-old girl's arse.

This fourth instalment in the franchise comes bearing the poster tagline 'The Rules Have Changed', but they haven't, not really. Kicking off a fresh, Marky Mark-hued trilogy, it's a reboot of sorts. By the same director, set right after the last one. We are transplanted from the urban devastation caused in Dark Of The Moon to rural Texas, where lives Cade Yeager (Wahlberg), a struggling inventor so down on his luck he can't even afford a Texan accent or a pair of trousers for his daughter Tessa (Nicola Peltz).

On discovering a beat-up old truck in a disused cinema ("It's all crap like sequels and remakes these days," the owner tells him; it's a good joke) he takes it home and soon discovers it is Optimus Prime. Reactivated, Prime is chased by Kelsey Grammer's evil CIA blackops division and soon so are the Yeagers. Tessa's boyfriend Shane (Jack Reynor) helps out, but not before spending a good five minutes explaining why he's an Irish teenager in Texas and, with the help of a laminated copy of the ACTUAL STATUTE in his wallet, why he's on legally safe ground to be boning a 17-year-old. Which is a relief, because now we're fine to eye her up ourselves, right lads? 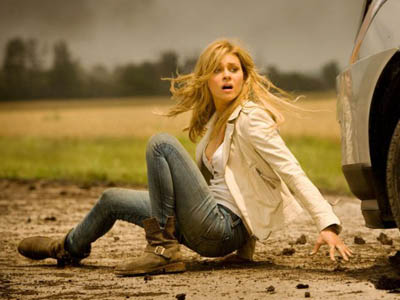 
All of this interrupts the development of a clever idea at the beginning that gives an alternative, more Transformery explanation for the Cretaceous–Paleogene extinction event, but when we're finally reminded of it again an hour later it gets more interesting. Tech CEO and douche Joshua Joyce (Stanley Tucci) is working with the CIA to create their own Transformer army, using Megatron's head as a template. He succeeds in building Galvatron, who, having recovered admirably from the time when I got him for Christmas in 1986 and vomited on him during a family car journey to Bideford, enacts his plan to wipe out the human race and the Autobots.

So a small-scale, kitchen-sink drama, then.

Now look: you can't fault the spectacle of any of this. See it in IMAX 3D and you can't fail to be battered compliant and insensible by the sheer size of it. It looks amazing. Say what you like about Michael Bay, but few directors understand bigness in the same way and have a signature directorial style to accommodate it. And it's a wisely controlled scale, focusing in on the characters when they're in danger, then back out again when a whole city block's about to get an alien warship in the face. 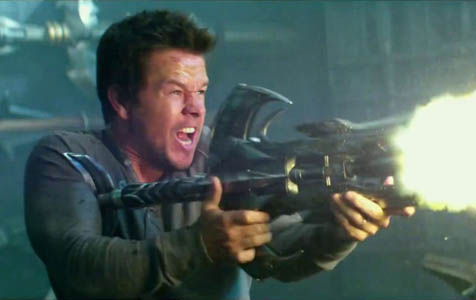 
But he doesn't care much about the human race getting wiped out or not: he never shows us anyone other than the Yeagers as innocent representatives, or considers mortality in any real sense. Humanity is absent from the Autobots, despite the attempts to endear through their comedy accents and Hound's baffling cigar/beard setup; we're supposed to accept them as our own but it's difficult when everything Prime says is earnest and portentous. The fact that, when it all starts getting smashy-smashy in the final third, you can't really tell Autobot from Decepticon amid the monster mash doesn't help much either.

And there's not much humanity on show for the human race, Wahlberg's laudable efforts notwithstanding. If you're going to make a film about a threat to life as we know it, then at least remind us why life's worth protecting. Yes, it works great as a blockbuster, and it represents an IMAX pounding and a half - in a totally good way - but it never conveys the gravity of the extinction it threatens. Or the fun of a truck that turns into a robot.