War For The Planet Of The Apes

The Apes franchise has followed a pretty predictable release pattern thus far: they arrive with nary a fanfare smack bang in the middle of summer blockbuster season and subsequently smash the low expectations they set. Rise and Dawn were both sleeper hits, but War For The Planet Of The Apes brings with it a little too much baggage. Hung heavy with the weight of expectation, it is a largely bleak and downbeat affair: if this is to be the climactic part of the Apes saga, it feels like a graceful and dignified exit, but you can't help but think it could have gone out with more of a bang.


War For The Planet Of The Apes really drives home the Chris Nolan-esque, Dark Knighty vibe that's been core to the franchise: it's an inherently ridiculous concept - hey everybody, remember Tim Burton's Planet Of The Apes? - that's played straight with unwavering sincerity and more than a hint of po-facedness. The results are fascinating films with depth of character and well-defined stories... but are they fun? War For The Planet Of The Apes doesn't feel fun. Its gritty atmosphere comes at the expense of fun. You admire Caesar. You root for Caesar. But you never really fall for Caesar. He's a buzzkill. Shit at parties. The kind of ape you want leading you into battle for the fate of the planet, not the kind of ape you'd want to be stuck in a lift with. 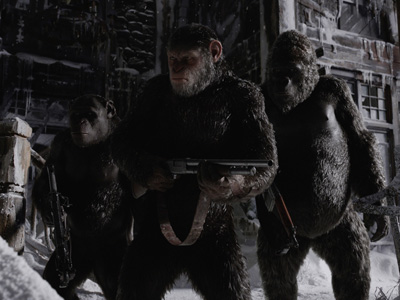 The ape village was dangerously low on banter.


The tone is, in a word, grim. The dialogue is dry. Even the palette is wintry: sludge whites, mud browns and every grey in between. Maybe you think the threequel taking the high road to tell a smaller, more intimate story is admirable, but maybe you saw a movie with the words "WAR" and "APES" in the title and figured, Hell yes, I'm down for a monkey war. Reminder: the last movie had a screaming chimp riding a tank, firing double machine guns - a bit more of that anarchic spirit could have stopped War For The Planet Of The Apes from feeling like a bit of a drag. There are grace notes here, with moments of fragile beauty and overbearing sadness, but you will quickly discover you have a limit for how many times you can watch a monkey cry in one evening.

That we are even talking about touching emotional scenes in a movie about sentient apes is astonishing, frankly; it's worth taking a step back to remember just how much of War For The Planet Of The Apes exist only as ones and zeroes. Andy Serkis gets the plaudits he deserves for his towering performance, but the visual FX wizards at Weta should not be forgotten; thanks to their expertise, there are simple scenes of dialogue, particularly with photorealistic monkeys like Steve Zahn's Bad Ape, that are mesmerising to watch. It's cinema, evolved. It's like Woody Harrelson's character says as he stares down Caesar: "My god... your eyes. Almost human." 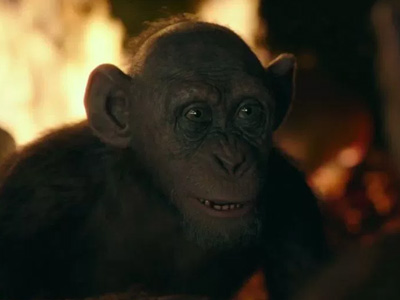 An actual monkey would be cheaper. I hear they work for pea-[hooked off side of stage]


Woody, you hope, is the movie's best hope for an unpredictable, rogue element - the Joker to Caesar's Batman, if you will - but you'll have to make do with a fairly rote villain, whose character notes clearly just read "Extremely Colonel Kurtz". The references are flung in your face about as subtly as a fistful of steaming apeshit: fine, have your mad Colonel shave his head and refer to the simian soldiers collectively as "Kong", but daubing 'APE-POCALYPSE NOW' on a wall? Leave the terrible monkey puns to us, thanks. Harrelson's incessant Kurtzing does contribute to the overall air of menace - particularly one chillingly insane monologue - but it comes off as cosplay.

Get yourself in the appropriate mindset and War For The Planet Of The Apes feels like the smart way to end the trilogy; it forgoes an epic conclusion that strives to be bigger than its predecessors for a bolder chapter that complete's Caesar's journey from chimpan-A to chimpan-Z. Yet I was still left wanting more. Maybe this maturity shouldn't come as a shock, given the series' continually surprising nature - perhaps this is a fitting end to a franchise that had absolutely no right to produce movies as good as it did.

More:  War For The Planet Of The Apes  Planet Of The Apes  Andy Serkis  Matt Reeves  Woody Harrelson
Follow us on Twitter @The_Shiznit for more fun features, film reviews and occasional commentary on what the best type of crisps are.
We are using Patreon to cover our hosting fees. So please consider chucking a few digital pennies our way by clicking on this link. Thanks!