Must say, watching all these DVDs really cuts into my watching of regular scheduled programming. I probably need another TV to put in the kitchen. Wall-mounted on a bracket, like in a Chinese restaurant. Ooh, and I could also be a front for the Triads. Wait - scratch that. 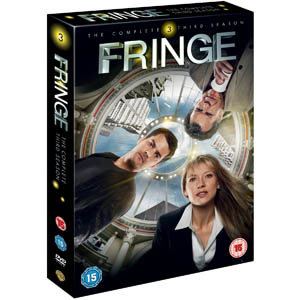 Pacey! Where have you been? Dawson and I were looking everywhere for you! In a parallel universe, you say? Um ... right. Good for you, mate.

Fringe. The show that everyone ... well, some people ... OK, just me, is calling 'Dawson's Geek'. And even I've only said it once, if I'm honest. Not even out loud. Three seasons in, this sci-fi procedural from the head-brain of JJ Abrams is proving itself all sorts of head-scratching fun.

The Fringe division of the FBI investigates weird X-Filey cases involving the closely-guarded secret that there's a parallel universe in which exists an alernative version of everyone. In this season, the divide has been breached and episodes take place alternately in that reality and this, where the parallel equivalents have sent their version of main character Agent Olivia Dunham to pose as the other one and infiltrate the Fringe team. I forget why. Just for kicks, I guess. Wouldn't you?

All of which could too easily lead to confusion and general who-gives-a-fuckery on the viewer's part - I don't generally have a lot of time for over-complex sci-fi plot devices which require a lot of figuring out - but Fringe succeeds here in two things: first, it does a good job of anchoring you quickly in whichever universe the episode's set in, through clothes, hair and so on (and if you really can't wrap your head around it, the opening credits sequence is in blue for one universe; red for the other).

Second, and crucially, it doesn't spoon-feed you the information with a "Meanwhile, in the other universe ..."; it gives you the indicators and lets you work it out. For me this is the perfect balance between feeling stumped and feeling proud of myself for having cracked it, which obviously makes me about as complex a human being as a nine-year-old, but hey, I'm comfortable with that as long as you give me a lollipop every now and then.

We're not strictly in X-Files territory here, though: where much of what Mulder and Scully investigated was eventually ascribed to the paranormal and filed under 'inexplicable', everything the Fringe division looks at seems to be explained away through science. It's an internal science created by the show, of course, and it requires you to acknowledge the existence of a parallel universe, but nothing ever just comes down to "Oh right, it was a ghost/God/the Easter Bunny." Within Fringe's own internal grammar, and to the writers' great credit, there's a rational explanation for everything.

Speaking of people who like rational explanations ... (*does segueway dance*) 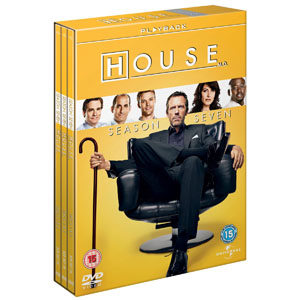 The sudden anti-climactic sting of the will-they-won't-they coupling finally come to fruition: thy name is House season seven. After six years of him bursting into Cuddy's office and demanding permission to cut off someone's feet to cure their headache, she and he got down to playing some actual doctors and nurses in the season six finale and all of a sudden we had to deal with where they took it from there.

The result? An oddly muted seventh run, entirely consistent and admirably scripted in terms of character but with the pervading sense of a key dynamic lost: the conflict between House and Cuddy. This was kind of replaced with the problem of how they manage to keep their relationship going without compromising the butting of heads that previously kept 24 people a year from dying of a mystery illness, but overall ... no. Just no.

There's a certain quality line below which the show is never going to dip, though, and there's definitely enough here to keep fans happy, me included. For a show on the surface so rigidly structured it's always done a great job of keeping itself fresh: new characters, new arcs; the diseases fall by the wayside after a while.

So Thirteen departed for a bit, muttering something about having to travel back in time to the 19th century and help defend a small town in Arizona against an alien invasion - a reasoning given fairly short shrift when I wanted a three-month sabbatical from work, as it turned out - leaving a slot open for a woman on the team, eventually filled by Masters, whom everyone hated. Except Chase, who probably tried to get off with her at some point; I don't remember. Taub, now a full-enough-fledged member of the team that you care about his personal life, struggles to cope with living apart from his wife for the first time. Chase settles in to his new haircut, and Foreman ... well, just sits around being grumpy for the most part. It's almost as if being constantly passed over for promotion and subjected to continuous racial taunts in his workplace isn't enough for him.

The Cape - The Complete Series
Buy the DVD on Amazon 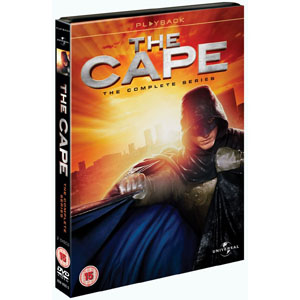 With all eyes on developing big screen outings for our favourite superheroes, it was never going to take long for the comic-book genre to reach our televisions again, even if the characters had to be created from scratch. However, as The Cape proves, you can't just hand a mask and a mission to anyone and expect the resulting story to be a hit. Or even just 'good'.

Vince Faraday (David Lyons) is a regular, albeit super-fit and righteous, cop who gets caught up in a high-level conspiracy and is mistaken for 'Chess', a criminal mastermind. Following an accident that lets everyone think Faraday is dead, he decides to go into hiding and takes on the superhero persona The Cape, thanks to being taken in by a circus-themed gang of thieves who give him ... a special cape. Unable to see his wife and kid, who both believe he's dead, Faraday plans to bring down the real Chess, a renowned millionaire businessman, with the help from a mysterious high-tech whiz known as Orwell (Summer Glau).

The concept alone is enough to excite geeks everywhere and the show does a great job of making each episode feel cinematic, particularly with the cuts to comic-book framing and colour tones. With a masked vigilante out to rid his city of corruption, and with enough budget to provide the necessary spectacle that goes along with that, it's easy to see why this show was so hyped before airing.

However, it all falls down on one fundamental issue - it takes itself too seriously. With magic capes, midget robbers and even Vinnie Jones as a supervillainous thug known as Scales (thanks to his lizard-like skin), The Cape needed to match the camp content with a fun feel, but instead The Dark Knight seems to have informed it that everything should be played dark and gritty. Even Vinnie jones.

A lot of the blame for this must also land at the feet of Lyons, who as the titular hero doesn't quite have the charisma to make his brooding Batman likeable. He has the strength to carry off the often impressive fight scenes, and the look of a man weighed down in serious issues to a tee, but when everything around him, including his own costume, barely stays on the right side of ridiculous, he should be providing a much-needed humour and levity to the role to remind us that it's all just for entertainment's sake. As it is, a very English and dry James Frain has all the fun as the neurotic and psychotic Chess, making us root for him more than his champion counterpart.

Fans of the comic-book genre will still find much here to like, as the building of a semi-realistic superhero is explored in greater detail and depth than ever before. It's just a shame that the creators couldn't quite get the balance right and remember that, first and foremost, superheroes are supposed to be fun and interesting.

You can win a copy of The Cape on DVD by entering our insultingly easy competition right about here.
Also out this week

The Big Bang Theory - Season Four DVD
The Only Way is Essex - Series Two DVD
Sanctuary - Season Three DVD
More:  DVD Weekly  Fringe  JJ Abrams  House  Hugh Laurie  The Cape
Follow us on Twitter @The_Shiznit for more fun features, film reviews and occasional commentary on what the best type of crisps are.
We are using Patreon to cover our hosting fees. So please consider chucking a few digital pennies our way by clicking on this link. Thanks!