In his role as executive producer, Cowboys & Aliens represents Steven Spielberg's fourth alien movie this year, after Super 8, Transformers: Dark Of The Moon and his cameo in Paul (and that's not mentioning his TV series, Falling Skies). Throw in the rest of the year's extra-terrestrial activity (get bent, Battle LA) and it's no surprise the genre is starting to look a little fatigued. More Western than sci-fi, Cowboys & Aliens at least has a hook, but when push comes to shove comes to "we have to destroy the invaders' conveniently accessible power source", it's Just Another Alien Movie like all the rest.


Daniel Craig plays cowboy Jake Loner-gun – sorry, Lonergan – who wakes up in the Arizona desert with no memory of who he is or how he got there (amnesia is so hot right now), or for that matter, why he has a funky-looking cyber-bracelet locked round his wrist. In lockdown after displaying a Bourne-esque penchant for martial arts (CUE FAST CUTS), Lonergan is witness to something out of this world, as alien ships attack the town and whip away the citizens via a gnarly-looking metallic lasso. You could say the Wild West just got Wilder! You could, but you'd look like a dick.

Trouble is, after this excellent, atmospheric opening, you have to wait a good 45 minutes for the movie proper to kick in – until then, you slog slowly through the desert like a bloody tumbleweed. In the meantime, we get to know Craig's character's back-story (no more developed than that of videogame Red Dead Redemption) and are introduced to Harrison Ford's land baron, Angry McScowlington, or whatever his name is. Also Sam Rockwell is there, but he doesn't dance, for shame*. Sadly, whenever the aliens are off-screen, the cowboys just can't cut it. 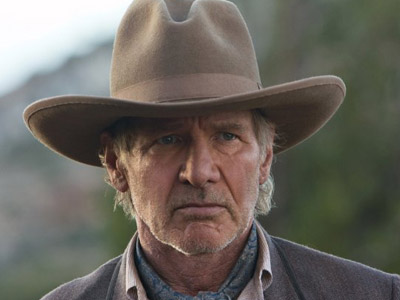 
Thank goodness, then, for some genuinely A-grade action scenes. The first alien assault is swathed in darkness, but the second comes in broad daylight – quite a novelty for the genre, really – and does a grand job of picking up the pace. Despite the characters finding the alien hide-out by seemingly riding in a random direction on horseback (the way of the West, I guess), the showdown between man and beast is just about worth waiting for. Even in the harsh desert sun, the SFX never wobbles – even if a few licences are taken to keep the movie pulsing forward. Either bullets kill the aliens, or they don't. Pick one.

There's precious little to love about Cowboys & Aliens, other than some quite excellent special effects and some top-notch creature design that has more than a hint of Del Toro creepiness about it. The human element is lacking: Craig's character is an emotionless cipher, Ford's transformation from baddie to bedgrudging goodie doesn't convince and Olivia Wilde doesn't even have the good grace to keep her clothes off. Perhaps there's a reason westerns and science fiction don't usually mix – the movie alternates between being dry as a bone and camp as a comic-book collector's change purse. 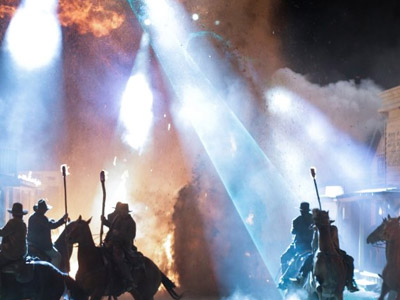 
You suspect much of Cowboys & Aliens works better on the page, where pulpy nonsense doesn't carry quite as much pomp. Take Olivia Wilde's character, for example: though she does graduate to more than just the token totty after a neat plot twist, her role never quite fits the feel of the movie. Conversely, scenes of grouchy Harrison Ford paternally bonding with a young apache boy are tonally at odds with the intergalactic sound and fury elsewhere. Favreau has a lightness of touch when it comes to action, but is still heavy-handed when it comes to establishing character.

Seems you can't really have an all-out action spectacular and an authentic, measured, elegant Western at the same time. The result is patchy, if enjoyable in parts, but nowhere near as awesome as that title suggests it should be. Try again next year, Steven.

* Hopefully this makes up for it.

More:  Cowboys And Aliens  Daniel Craig  Harrison Ford  Olivia Wilde  Jon Favreau  Sam Rockwell
Follow us on Twitter @The_Shiznit for more fun features, film reviews and occasional commentary on what the best type of crisps are.
We are using Patreon to cover our hosting fees. So please consider chucking a few digital pennies our way by clicking on this link. Thanks!