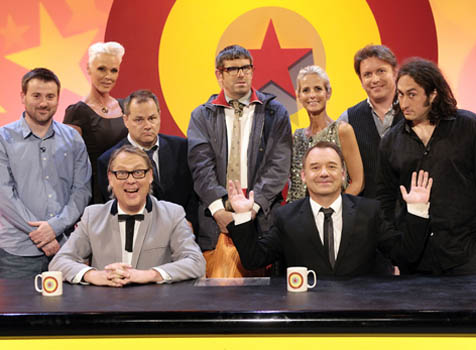 It having been shoved onto the BBC2 midweek schedule oddly without fanfare or trailers back in August, nobody seemed to realise Shooting Stars was back on. By which I mean I didn't. Happening upon it while channel-flicking about three weeks in, I treated it much like I would an old episode of QI on Dave: this should get me another half-hour closer to death harmlessly enough.

I was wrong. It quickly became apparent that I was watching the funniest thing on TV all over again. At once, it was 1996. I had a pitiful attempt at a Noel Gallagher haircut, a nascent teenage drug habit and the unshakeable notion that Cast were a really good band.

And the thing I liked most was that Shooting Stars hadn't changed. I mean, not even a little bit. If any pressure had ever been put on Vic and Bob to change the format or freshen it up, they had ignored it gloriously. Jack Dee had taken over Mark Lamarr and Will Self's grouchy team captain role without missing a beat. Bob continued to imply that Ulrika was a classless, footballer-chasing fishwife. Vic continued to do the 'club style' singer joke fifteen years after everyone had figured out the punchline. The Matt Lucas-shaped hole was filled by Angelos Epithemiou. He had a bag. They sang a song every week asking him what was in it.

In an age when TV comedy is under constant scrutiny for anything that offends, they asked questions like: "True or false? Racism is the new black." If Jimmy Carr had said that on 8 Out of 10 Cats, we'd have been hearing about it in the Daily Mail for weeks. But Shooting Stars exists in a bubble of obvious silliness; to take anything in it even slightly seriously is to miss the point entirely. Long may it contin ... 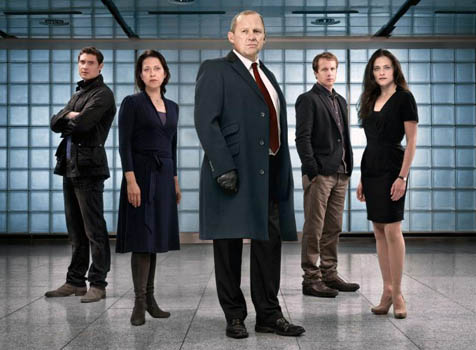 You always have to admire a show that ends of its own accord. When producers say "no, it's not about the money - the story is coming to a natural end so let's do it justice". And so it is with Spooks, one of the few big-budget BBC dramas that looked realistic, kept the audience on its toes and always remained sharp and intelligent. And it kept this quality up consistently for 10 years.

But the best thing about this grounded spy show was that it was never afraid to kill people off left, right and centre. Minor characters, main characters, good guys, bad guys ... no one was safe and death could come at any time - not just for ratings-boosting finales.

And so, when it came to this final series, which rightly focused on section chief Harry's mysterious past, everyone was waiting with baited breath to see if the secret service's righteous leader would bite the dust. More to the point, with an old flame appearing - a former Russian informant - and a newly-discovered, grown-up enemy agent son, what did this mean for Harry's chances of settling down with colleague Ruth and leading a normal, fulfilled life? Er ... Matt

Defining moment: The climactic end, a final scene too good to spoil here and an epilogue that not only features a cameo from an old familiar face, but also perfectly captures the mood and emotional tone of the whole show. 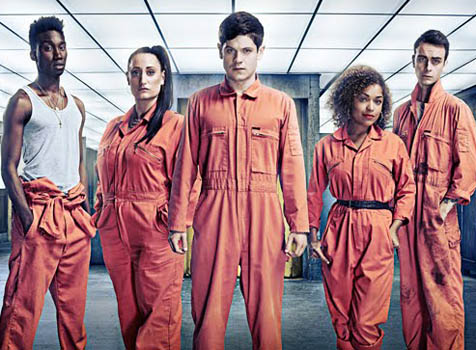 Round up a group of 20-something miscreants, forced to do an endless amount of community service while coping with a bizarre mix of interchangeable superpowers, and you can say hello to Misfits. After an exceptional amount of success the show returned to small screens for a third season in November, minus Irish funnyman Robert Sheehan. Thus far Robert, aka the immortal Nathan, had been the epicentre of the series, with his loud, proud and cheeky Celtic vulgarities being a constant source of amusement. So E4 audiences nationwide were left unsure how season three would pan out after he decided to leave the cast, seeking adventure in the West End.

Turns out we had nothing to worry about. Replacing Nathan and joining the four remaining unlikely heroes is Rudy, a schizophrenic loudmouth scoundrel with a penchant for distastefully seducing girls that are way out of his league and then crying unnecessarily.

At the end of season two we saw the Misfits gang all lining up to trade in their current powers for some shiny new ones: Kelly is now a rocket scientist, Alisha can put herself in anyone's shoes, Simon can see the future, and Curtis can ... turn himself into a girl? Sure. Anyway, season three shows the five young criminals utilising their new strengths while coming up against superpower STIs that force your extremities to fall off, zombie cheerleaders that would put Dawn of the Dead to shame, angry ghosts, immaculate conception and, of course, Hitler.

As usual, Misfits explored more uncharted territory than Christopher Columbus and did so with an added pinch of hilarious crudity, as well as another handful of dead probation workers. Alex

Defining moment: Simon fulfils his Superhoodie destiny and travels back in time to save Alisha, simultaneously making her fall in love with him all over again. In Kelly's words: "Dead romantic." 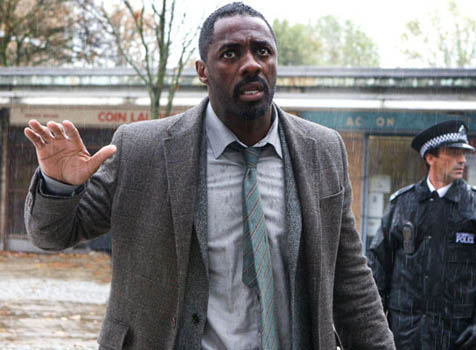 The lone cop drama with the cop's surname as the title is as old as TV itself. It's a well-known fact that John Logie Baird only invented the gogglebox because he wanted to see a police procedural about himself called 'Logie Baird'. (This was later rebooted as Yogi Bear.) There are no new ideas in the genre; only degrees of interesting actor through which to play out the old ones.

The traditional detectives weren't characters at all: Poirot, for example, is himself nothing but a plot device; a tool through which the viewer finds out who committed the murder. He has no character traits, feelings or backstory of his own. He might just as well be an iPhone on a table. In advancing cop fiction towards more character-led drama we've come a long way, but we've stalled somewhere down the line, mired in cliche.

Idris Elba's take on John Luther is one of the better cracks at an interesting lead character of recent years. Yes, there are the standard TV cop tropes - the estranged wife, the introspection, the single-mindedness - but within the confines of terrestrial TV coppery, ol' Stringer Bell managed to create something pretty special. His is a performance full of odd little tics and mannerisms, sometimes charming, sometimes threatening, but always doing enough to keep you interested, because you just felt compelled to look at him.

This year's four-episode second series saw Luther up against the usual lone-nut killers found in the grittier end of weeknight cop-show fare, including a pair of twins who rolled dice to determine their next murders and a guy in a Punch mask. Neither delivered huge surprises, but you never lost the sense of the effect each murder, and the job at large, was having on Luther. Elba wore it on his face like a series of scars, each digging a little deeper than the last. Ed

Defining moment: In a scene where we have as little time to react as he does, Luther gets his hand nailed to a table and, after a quick yelp that even the more robust among us would excuse him, still manages to finish the conversation. 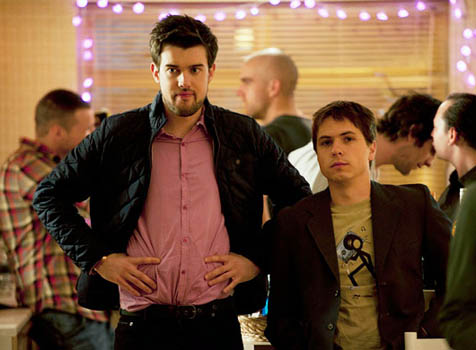 For someone who loves TV, I am a terrible curmudgeon when new shows appear and try and get me to watch them. I know what I like, and I know that anything new is rubbish, not like the things I already watch, and should be approached with suspicion. So when the trailers started in August for Channel 4's new comedy Fresh Meat I was right in there with my so-called opinions about 'youth TV', and Jack Whitehall being 'shit'.

Then September rolled around and I was bored. Bored and in possesion of the 4oD app ("TV App of The Year" - Me), so I tried it out, rapier wit ready to tear it to shreds. It wasn't required.

In the first episode (the only one written by creators Jesse Armstrong and Sam Bain) we meet the eponymous fresh meat in their new student digs: five shiny-faced first-years at Manchester Metlock University, one invisible flatmate who manages to live there without being seen once, and Howard the conspiracy-theorising, chicken-blow-drying perma-student who's starting all over again.

What at first seemed like a fairly standard comedy drama quickly turned into a clever and complicated set of examples of how hard it is to branch out on your own before you even really know who you are. Vod, the independent rebel whose street-front turns out to be for real is still deeply fractured and vulnerable, JP, the arrogant rich-boy prick who seems to have gone to university by accident and doesn't understand these poor people in the slightest, actually just wants to be liked, even if he makes it incredibly hard. Josie, who has obviously been The Good Girl all her life, basically turns into an alcohol-fuelled sex machine over the course of the series. Because sometimes that's what happens the first time you live away from home.

Jack Whitehall is not shit. Not in the slightest. What seemed to be him just playing a magnified version of his stand-up posh boy saying rude words turned into a wonderful show of a deeply insecure kid who'd been pretending his whole life and didn't know how to stop. Great stuff. JP's still a prick, mind, but he means well. Sort of.

Howard the loveable weirdo is also known as Greg McHugh, the brains, tan and quiff behind the awesome Gary: Tank Commander, a show that makes my top 20 list and I strongly recommend you hunt down. You radge. Kirsty

Defining moment: Howard, having been tasked with looking out for Paul 'The Invisible Man' by Paul's mum, decides to be thorough and installs CCTV in Paul's bedroom. Turns out he's OK: he's just wanking. Constantly.