"Well... what did you expect?" I don't give much credence to people who equate 'blockbuster' with 'brainless entertainment'. Just because it has a big budget, is based on a board game, stars dramatically-challenged pop singer Rihanna and is a blatant Transformers stand-in for an Optimus-free summer, doesn't give Battleship the excuse to be average. All of this puts it at an instant disadvantage when it comes to preconceptions, sure, but I for one hoped that director Peter Berg could pull a soggy rabbit out of his hat. After all, how can you make a $200 million alien invasion blockbuster set on water, featuring methods of transport so lumbering and slow, it takes them an hour just to change direction? How indeed. The answer is OH MY GOD LOOK AN EXPLOSION!!!


Battleship approaches its 'source material' (a board game that no one under the age of 35 has ever played) with all guns blazing... and fails miserably. That's exactly what Peter Berg achieves with Battleship: it's a critic-proof movie that nonetheless makes a whole lot of noise about nothing in particular. It starts promisingly enough, setting up Taylor Kitsch's hopeless layabout as a Navy hero-in-waiting, but somewhere around the halfway mark, begins its unstoppable back-slide into Michael Bay territory, where every dumb plot fart can be excused because holy shit, that shit just exploded and shit! What starts out as a seriously tense naval war thriller ends up being Pearl Harbour II: Intergalactic Boogaloo. 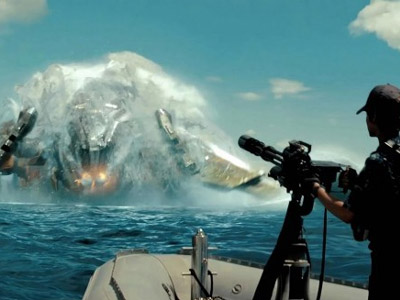 
Believe it or not, there is an interesting Battleship movie among the wreckage. Once the aliens surface and set up their perimeter, the first 15 minutes of conflict buzz with potential – the fact it's all on water just plays in its favour, in that you're not quite sure what to expect of either side of the board. Sadly, Berg seems all too aware of the limitations he faces – slow ships versus superior alien mechanised grasshoppers – that he treads water for a good 45 minutes, choosing to introduce sentient alien missiles that are fired into densely populated areas, causing havoc on land instead of at sea. These big evil Bumbleballs of destruction (from Ertl!) feel like they're from another movie, ticking the box marked 'city-wide chaos' and providing plenty of cool shots for the trailer without ever adding anything of substance to the movie. It's a movie full of money shots that has no pay-off whatsoever.

While all this chaos is unfolding, meanwhile, Battleship's central conflict between a fleet of Naval destroyers and a triad of gigantic alien ships grinds to a halt. There's an extended 15-minute sequence in which the crew aboard Kitsch's vessel, unable to use conventional radar, play out a suspiciously familiar grid-based tactical battle; a nice nod to the game, but it saps the energy out of the movie. For what? To ingratiate itself to fans of portable plastic turn-based strategy games? Let's face it, they can't possibly exist outside of care homes.

So much of Battleship is surplus to requirements. Rihanna's character, Raikes, is nothing more than a cynical ploy to lure teenage girls into the movie equivalent of a boy playing with his toys in the bath. On dry land, there's an excruciatingly ill-conceived sub-plot featuring Kitsch's physical therapist girlfriend, Brooklyn Decker, and one of her disabled patients, who is so thinly-sketched, I can only think to call him No-Legs Nick. Their entire character arc sees them hike up a mountain and then back down again, by which time they've suddenly turned into super brave heroes in an action movie, complete with moral transformations pulled out of their asses. 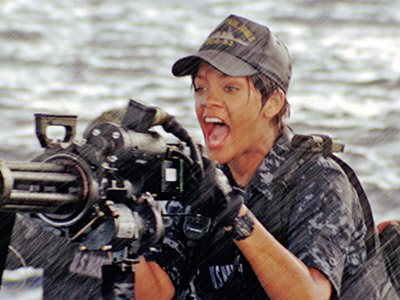 If I knew anything about Rihanna, I'd write it here.


All of which you could possibly excuse had Battleship's aliens been interesting villains, but this is the movie's biggest fumble – in making the bad guys completely non-threatening and having their motives fuzzy and unclear. When it's not ripping off Independence Day, Battleship has absolutely no idea what to do with its aliens. One minute they're fierce, intelligent warriors, the next they turn a blind eye to anything that isn't pointing a gun to their head. Are they merciless killers or pacifist warriors, as the constant mentions of The Art Of War suggests? In any case, it's impossible to take an alien that looks like [highlight spoiler]Newton Faulkner when it takes its helmet off seriously. Berg plays his trump card way too early and leaves the movie devoid of threat as a result.

It reminded me a lot of last year's missed opportunity, Battle Los Angeles: another alien invasion movie that teemed with promise but turned out to be utterly ordinary and totally forgettable. Battleship shares the same seemingly insurmountable odds; the stoic hero with a crisis of confidence; the unstoppable alien force who have mastered the art of space travel and warfare but still come with a big, flashing, easily exploitable weak spot that will bring their whole operation crashing down. The one thing Battleship could redeem itself with is a sense of humour, which it indulges far too rarely – the biggest laugh is purely accidental, in a final scene of such cringeworthy patriotism it guarantees Peter Berg a lifetime membership of Team America.

Not for the first time this year, I felt sorry for Taylor Kitsch – dealt such a shitty hand despite showing no small measure of charisma. There's a definite smack of the Sam Worthingtons about him: a talented actor reduced to the stakes of playing a pawn in some mad game of CGI chess. There's no one on Earth who could make Battleship's script feel less leaden, and it frequently sinks all Kitsch's efforts to lighten the movie's tone – I doubt anyone could convince an audience that you can POWERSLIDE A 45,000 TONNE BATTLESHIP. 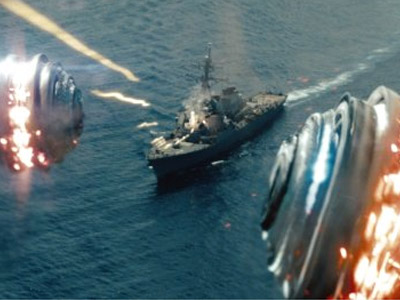 
There's a telling quote early on in Battleship, as Liam Neeson's authority figure – so esteemed he literally does nothing else for the entire movie – utters a quote from Homer while castigating Kitsch's lost cause, only to have his underling finish it for him: "You have no idea how much it infuriates me that you know that," he spits. Judging from the strong start, Peter Berg clearly knows how to make a decent action movie, but frustratingly defaults to the most boneheaded options every time – big explosions, loud noises, cheeseball dialogue and ridiculous, overblown action sequences that attempt to distract from the fact that none of it makes any sense.

Maybe I was a fool to expect anything less, but despite its willingness to entertain no matter the cost, Battleship is more miss than hit. For God's sake, just go and see The Cabin In The Woods, would you?

More:  Battleship  Peter Berg  Taylor Kitsch  Liam Neeson  Brooklyn Decker  Rihanna  Alexander Skarsgard
Follow us on Twitter @The_Shiznit for more fun features, film reviews and occasional commentary on what the best type of crisps are.
We are using Patreon to cover our hosting fees. So please consider chucking a few digital pennies our way by clicking on this link. Thanks!