WAKANDA MOVIE IS THIS?

One thing the Marvel Cinematic Universe does not need more of is white privilege. Tony Stark with his billion dollar problems. Captain America with his government sanctioned patriotism. Thor, the blonde-haired blue-eyed Norse God with claims to the throne. Peter Quill, the self-appointment Star-Lord, the so-called guardian of the galaxy. We're good for white dudes. Arriving far too late to the party is King T'Challa, a storied hero from Africa with a rich heritage who is finally breaking the unremitting streak of white heroes on the Marvel payroll. Without wanting to disservice the people of colour who have served the MCU well to date - Anthony Mackie, Zoe Saldana and let's not forget Samuel L motherfucking Jackson - Black Panther is the character that the Marvel universe, the movie industry and the entire world needs right now. It's hard to imagine a more righteous movie arriving at a more necessary time.


It's impossible to separate the twin factors upon which Black Panther will be judged: the cultural importance of his momentous arrival (including the near certainty of his success); and the content of his character. Fundamentally, the fact a Black Panther movie exists is a victory in and of itself, but that shouldn't be enough: representation matters, but it matters more if you're representing quality as well as equality. Thankfully, T'Challa leaves his mark on the MCU: an authentic, vibrant and highly energetic origin story unlike any we've seen so far, Black Panther is every bit the movie it needed to be. It's the real deal: a walking, stalking powerhouse of a superhero movie.

The Marvel superhero template is still buried in here somewhere - trials, tribulations, adversity, unity, victory - but director Ryan Coogler layers Black Panther deep with meaning; it's both rich with history and ripe with relevancy. On the one hand, yes, you have the pre-requisite handsome leading man learning how to be the hero the studio's profit and loss column so desperately needs him to be, but Coogler throws in references to police brutality, immigration, poverty - even abuse of political power, the kind of which we see every day from the White House. Black Panther functions as a hugely entertaining superhero romp as well as an allegory for the struggle for everyday African-Americans: to be seen, to be heard, to be recognised. 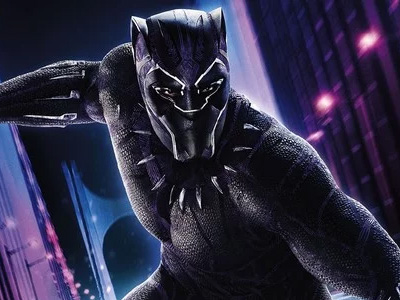 No matter what they wear on weekends.


Coogler has loaded his supporting cast with talent. Michael B Jordan is the star of the show as the villain, Erik Killmonger (pronounce it 'kill-mon-zhay' if it makes you feel better), a cut above the usual Marvel antagonist. Erik was raised as an orphan straight outta Oakland, the mirror image of our king-in-waiting; usually the villain's motives feel tacked on and trite, but Jordan grounds his bad guy with relatable problems and politics. Matched with a frightening physicality, Jordan's intense performance is almost to the detriment of Boseman, who occasionally comes off as a bore in comparison, but it's refreshing to see a flawed hero wrestle with and confront his own inadequacies - and those of the ones he loves. Everything matters here: family ties bind, actions have consequences, traditions are threatened - there is meaning behind every scene.

Black Panther scores points on another front: T'Challa literally surrounds himself with powerful women. Danai Gurari's warrior general Okoye is a force of nature in this movie: fierce and fluid, watching her and the rest of the Dora Milaje fight is like poetry in motion. Lupita Nyong'o gives the typical love interest role a little more bite, while Letitia Wright is superb as T'Challa's baby sister-slash-Q-branch facilitator, adding humour to the mix. Comedy is really the one area in which the movie doesn't particularly excel: coming off the back of Thor Ragnarok, Spider-Man Homecoming and Guardians Of The Galaxy Vol. 2, the silliest Marvel movies to date, Black Panther is notably less funny than its predecessors. Nonetheless, earnestness is part of its appeal - it's nice to have a hero who isn't a snarky Stark archetype, with an endless supply of flip remarks on standby. 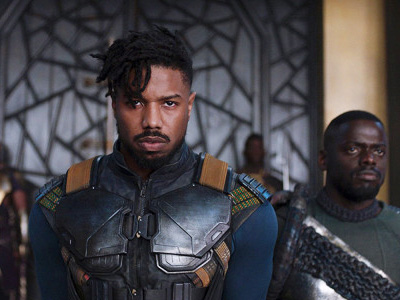 "Say something about my hair. I dare you."


Rather than mimic the heroes that have gone before, Black Panther is far more interested in forging its own identity, carving out its own corner of the Marvel universe. Wakanda is a stunning achievement of Afro-futurism, a city that looks both forward and backwards. Soundtracked by an authentic score, the movie has an electric rhythmicality; every scene bounces as if dancing to the beat of its own drum. Production design is frequently jaw-dropping - the Jabari tribe set in the Wakandan mountains is particularly stunning - and Ruth E Carter's costume design is astonishing from kufi to flip-flop. At every turn and every beat, with every iconic image burned into your retinas, Black Panther feels new and exciting.

The necessary coat of Marvel gloss does take the edge off the finished product a little. The script is left wanting in places (Michael B Jordan's character is supposed to be dangerously smart but sure says stuff like "I'm your King now!" a whole lot) and your unavoidable hero-villain last act showdown is tempered a little by being shot in near dark, featuring two dudes in identical black bodysuits. Par for the course, I'd say. Everything about Black Panther feels reassuringly familiar but also like you're seeing it for the first time - like seeing the same picture you've admired countless times but painted with a different palette. The fact that audiences can appreciate Black Panther for both its significance to the industry and its contribution to the superhero genre is cause enough for everyone to celebrate. Long live the King.

More:  Black Panther  Ryan Coogler  Chadwick Boseman  Michael B Jordan  Danai Gurari  Lupita Nyongo  Martin Freeman  Andy Serkis  Marvel
Follow us on Twitter @The_Shiznit for more fun features, film reviews and occasional commentary on what the best type of crisps are.
We are using Patreon to cover our hosting fees. So please consider chucking a few digital pennies our way by clicking on this link. Thanks!